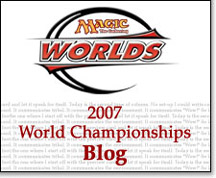 Welcome to New York City! The crack reporting squad of Josh Bennett, Bill Stark, Tim Willoughby, and Craig Gibson are combing the halls of the Javits Center for all the inside information as we close out the 2007 Pro Tour season. Who will be Player of the Year? What Standard and Legacy decks are at the top of the standings? What are the top draft cards in Lorwyn? All these questions and much more will be answered thsi weekend.

Want a head start on the next PTQ season? Here are the Top 8 decklists from Friday's Hollywood PTQ.

2 Duress 2 Thoughtseize 1 Life from the Loam

4 Counterspell 1 Life from the Loam 4 Smother


More than just about any other, Two-Headed Giant is a format about rules. It seems that trying to draft 'fair' decks is an exercise in disappointment when, by virtue of the way that the format works, there are some pretty ridiculous things that you can do.

As the Worlds Team Competition kicks off, I thought I'd take you through some of the winners and losers of the Lorwyn 2HG draft format.

Most of the cards in Lorwyn that key off tribal interactions don't really change a great deal, as they only key of things that you are doing. Mad Auntie isn't going to pump your teammate's changelings, but then it also isn't affecting either of your opponents. What Mad Auntie (and cards like Immaculate Magistrate) can do is use their tap ability on other friendly creatures.

There are three cards that break this rule. Elvish Handservant gets bigger whenever anyone plays a Giant spell, meaning that there is a much better chance of him getting colossal, due to both a greater number of cards being played per game and the potential of a cooperative teammate. Quill-Slinger Boggart gets to sling that many more quills for similar reasons. Finally, Bog-Strider Ash gets to gain your team that much more life given the opportunity.

Bog-Strider Ash is a double whammy of good, as having swampwalk, or any landwalk, in 2HG pretty much means being unblockable. Due to the flavour of various tribes, landwalk is a lot more common in Lorwyn than in recent blocks, so even though there are likely to be a lot of creatures around, damage can still get through.

When 2HG started out during Ravnica block, Dimir was the consensus best deck, with its milling strategy proving very strong. These days, those options are more limited, but there is still Drowner of Secrets, Broken Ambitions, and Jace Beleren to attack libraries with. When either player attempts to draw from an empty library, the whole team loses.

While Jace Beleren is probably the pick of the planeswalkers who have gone up in value, a couple of others have jumped further also. Garruk Wildspeaker can also untap a teammate's land, allowing for six-drops on turn four. His Overrun ability doesn't scale up, but regardless, he remains a threat to reckon with. Liliana Vess can't attack more than one player's hand (though she does now have a better chance of having a target holding something even if lots of spells are flying). The exciting bit about Liliana is her "Ultimate" ability. She can get a lot of creatures into play if she gets to fire off her biggest power.

Anything that affects everything on the board becomes that much better as boards get busier. Final Revels will either kill a lot more or allow for much bigger attacks. Hurly-Burly should kill off more monsters. The really exciting one, though, is Ashling the Pilgrim. Not only does Ashling get to wipe the board, but the damage she does is dealt to each player, meaning that teams take double damage from her effect. This "double damage" idea is also reflected in Faerie Tauntings, and can get pretty out of hand pretty quickly.

A few cards just become more powerful as they have a better chance of getting a good target. Wild Ricochet can be set up to cause more headaches, Heat Shimmer can get better creatures, and with two opponent and only one game, sometimes-marginal enchantment removal becomes much more maindeckable at a stroke.

Also, a brief word about Cryptic Command. By virtue of one little consonant, it is something of a beating in 2HG. Tap all creatures your opponents control? Don't mind if I do. Countering spells is also something that tends to be great in 2HG as the format is target-rich when it comes to bombs.

While Hamletback Goliath isn't looking for a particular "target," just the volume of creatures being played means that he tends to become of pretty impressive volume himself.

There are some cards that do take a hit in this format. One of the biggest losers is Dread, whose middle ability gets much worse as players can choose which head they do damage to, and as such can circumvent his ability. Colfenor's Plans works out in rather a different fashion. Both players will lose out on their draw step, meaning that if it wasn't worth it in single-player draft, it is definitely not worth it in 2HG.

Then there are the quality utility creatures that just lose out to the fact that there is a much better chance of their being removed fast. Imperious Perfect is still a fine card, but between two opponents, keeping it going for any time is much tougher.

Out of the 388 players in attendance this weekend, just five managed to sweep the six rounds of Limited. We tapped them for a little insight into their perfect performance.

Akira Asahara disputes the popular claim that white cards lead to match losses. He believes that aggressive Kithkin decks can bowl over many of the format's slower archetypes. Of course, he never saw the Kithkin at his tables, drafting instead two busty Treefolk decks.

His countryman Masami Kaneko thinks the same, and his decks prove it. Two decks heavily based on Kithkin, backed by Kinsbaile Balloonists and Surge of Thoughtwefts. Cashing in on the rejection of white has a second advantage beyond the obvious increase in card selection: he can spend his earliest picks building the skeleton of white creatures, and take signals as to what color to use as a supplement.

Frank Karsten also likes a "wait-and-see" approach. He finds that the mana-fixing in the format is more than enough to regularly support a splash of a third color, and so likes to spend his early picks on the most powerful splashable cards, and when they're not available, putting off a tribal decision as long as possible. That way, he can easily switch into whatever tribe is underdrafted.

Brazil's Rubens Campara echoes the Japanese love of aggressive strategies, demonstrating it by drafting two decks heavy on two- and three-drops. Particularly noteworthy was his black-red deck, which was light on the removal associated with that pair, instead relying on a tight curve of dangerous men.

Adam Chambers takes things to the other extreme, preferring decks with a defensive bend, but you can read all about that here.