The most challenging aspect of coverage is often deciding which matches will serve as the feature matches each round. When it comes to the World Championships, that task is even more difficult, as hundreds of the world’s best players descend on the Pro Tour stage for their shot at fame and glory. For the first round in Memphis, two matches playing just outside the auspices of the Feature Match Area that still merited the watchful eye of the coverage staff were Masashi Oiso versus Guillaume Wafo-Tapa, and Willy Edel versus Paulo Vitor Damo da Rosa. 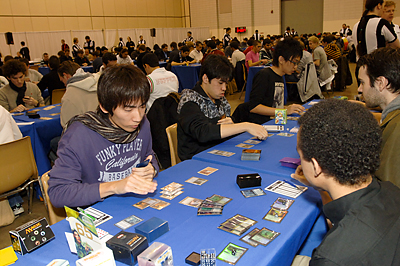 Masashi Oiso faces off against Guillaume Wafo-Tapa—just another match here at Worlds. Wafo-Tapa is famous for being an innovative deck designer with his Quick ‘n Toast deck firmly ruling Standard over the past year before morphing into the modern-day Five-Color Control. He was running what looked to be a throwback to the QnT days with a Five-Color build heavily reliant on black mana. As an added twist, his deck was completely foiled, making it all the more fanciful. Masashi Oiso, the reigning Japanese National Champion and a former Rookie of the Year, had brought the tried and true Faeries. He jumped out to a first-game lead with a draw that included smooth mana, a second-turn Bitterblossom, and just enough counterspells to keep Guillaume’s answers from allowing him to catch back up.

The second and third games were long, drawn out affairs. Wafo-Tapa revealed some of the black cards he was running in the form of Liliana Vess and Terror, both of which forced Masashi to re-evaluate his game plan. Oiso came up short in the second game as Guillaume ground his Faerie horde down to nothing, with some help from an additional sideboard star: . It wasn’t to be for the prominent French player, however, as Masashi jumped right of the gates in the final game with a second turn Bitterblossom, two Thoughtseizes, and a Mistbind Clique to seal the deal. When asked after the match whether the Faeries matchup was still bad for Five Color, Guillaume replied "No, I think it’s a good matchup, but Masashi had very good games."

Across the hall Paulo Vitor Damo da Rosa sat down to face fellow countryman and reigning Brazilian National Champion Willy Edel. Long a champion of Faeries, Paulo could be seen piloting the tiny fliers to a Top 8 earlier this season at Pro Tour–Hollywood. He didn’t disappoint this weekend choosing to run the blue-black hordes yet again. His opponent, meanwhile, had come to battle with the Red Kithkin list that has been seeing heavy play of late. Edel’s version included Ajani Goldmane as well as Elspeth, and the two planeswalkers came out to bat for him in the first, giving him a W. 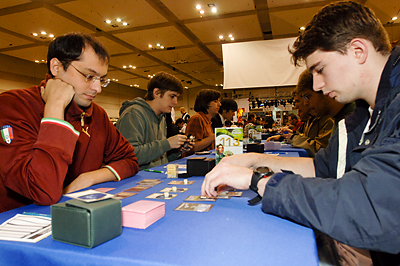 Brazilians Willy Edel and Paulo Vitor Damo da RosaDown but not out, Damo da Rosa came right back in the second using sideboarded s to stall his opponent, then back-to-back Cryptic Commands to break through for two alpha strikes. Outmatched, Edel had to turn to the rubber game in the hopes of squeaking out the match win. He came out of the gates in standard aggro deck fashion, but his attack was stymied by Paulo’s second-turn Bitterblossom, a Sower of Temptation, and a Mistbind Clique. When Scion of Oona hit for Paulo to make his team lethal, Willy did the math and scooped ‘em up.

When asked how he felt about having to defeat one of his home country’s national team members, Paulo replied "I feel more guilty beating him because he’s my friend. Even if he weren’t on the national team, I would feel the same way."

And what did Willy think about the Brazilian team’s chances this weekend? "I feel like we have a decent chance."