2008 Worlds Feature: Forget About Drafting the Shards—Let’s Talk About Alara

What do you see when you look at Bone Splinters?

It’s a black removal card, for certain. It has a slight drawback that is fairly well mitigated by the color’s mechanics. It’s sorcery, so you can’t do any fun combat tricks. It’s a relatively straightforward card.

Setting aside the flavor text for a moment and looking just at the mechanics, you’ve got to wonder: Is it a Jund card? Is it a Grixis card? Is it an Esper card?

Let’s try this with another card. Puppet Conjurer seems like another straightforward card.

It’s a black artifact with a

-cost activated ability that makes artifact creatures. It combos incredibly well with Etherium Astrolabe and Salvage Titan. That seems like as pure an Esper card as you can get.

Consider this, though. As well as it works with those Esper cards, it also does wonders with Fleshbag Marauder and Rockslide Elemental. Those cards are associated with Grixis and Jund.

So which is it? Is this card an Esper or Grixis card?

The answer is both and neither.

I’ve always kind of disliked reading lists of pros’ top picks. For the most part, the picks are all the same. The order changes slightly due to personal preference, but the cards still stay the same. The more interesting and useful bit of information to me is why they’ve ranked the cards the way they have. If one player prefers a card over another, what is it that pushes them to one side of the fence? 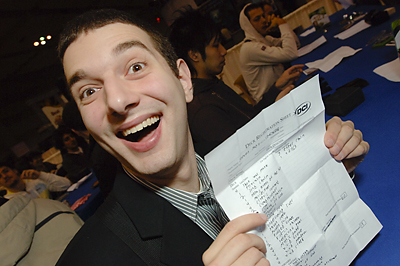 Steve Sadin is very happy about something. The answer to that lies in the sort of decks that they prefer to draft. Steve Sadin, of magicthegathering.com‘s Limited Information, summed it up fairly well for me when I brought this problem to him. “If I open a Broodmate Dragon, I’m going to take it. The card is so good that you really have to. But I’m not going to be happy about it. I really hate drafting Jund—I just can’t win a match with Jund. I’d much rather draft a good green-white deck. That’s why I love Oblivion Ring so much. It puts me into a color I’d like to be anyway on top of being a powerful card.”

Even beyond this, there’s another level of why to be addressed. It’s already been addressed that a pro’s card evaluation is ultimately going to be jaded by the types of decks they prefer to draft. That explains why the pick orders differ slightly from pro to pro. What that leaves is why they prefer one type of deck to another. Sadin explained his own preference fairly well. He dislikes the “Jund” cards because he doesn’t seem to be able to win with them. The green-white decks, on the other hand, have given him a great deal of success. He’s learned that he does best with that class of cards, so he has adjusted his pick order accordingly, devaluing the red and black cards that aren’t bombs while inflating the value of the cards that fit his scheme.

Shards of Alara is a deceptively rich format. Considering the fact that the set is named after the shards into which the plane of Alara was split, it’s not too difficult to see why shards are at the forefront of people’s minds when considering Limited formats. When you ask a player what deck they drafted, odds are that you are going to get a one word answer: “Jund.” “Naya.” “Bant.”

Despite players’ identification of decks by shard, if you asked a roomful of players to describe their ideal deck from any particular shard, you would get a variety of answers. It’s possible to get two decks working with a black, red, and green mana base that play completely differently. The underlying reason for this is that it isn’t really the shards that are important—it’s the mechanics and their synergistic interactions.

The major mechanics and themes in the set—devour, unearth, exalted, artifacts, and big guys—are each “from” one shard. You expect to find the little creatures that get enhanced by exalted in a Bant deck. When you see huge monsters and effects that benefit you for having them, you know that the shard in question is Naya. Creatures that feed off of other creatures and provide benefits when creatures hit the graveyard are strewn about Jund. These are the associations that each shard evokes.

Just because a mechanic “belongs” to a shard doesn’t mean that it is useful exclusively for that shard, however. You frequently find unearth cards sneaking into Jund devour decks and vice versa. Every so often, the little guys with exalted team up with the giant beasts of Naya. The mechanics bleed so well into decks from many shards that it’s best not to think of decks as shards at all, but instead to define them by what they do.

Because of this fact, it becomes incredibly important when drafting this format to figure out what mechanics you want your deck to focus on. Do you want to draft the swarming, aggressive Naya deck or the one that builds up for a couple of turns before spitting out a stream of ground-dwelling monsters? Do you want to draft a hyper-aggressive deck featuring an army of Dregscape Zombies and Goblin Deathraiders or a more controlling version using Blister Beetles, Bone Shards, and Fleshbag Marauders to generate card advantage before finishing things off with a big devour creature?

The cards you see are going to have a great deal to say about what you decide, but you still need to be thinking about how your deck prefers to play as you evaluate each card. Dragon Fodder is really good in the controlling Jund deck, or one that heavily features devour, but it’s pretty awful in the hyper-aggressive version. Basically, ask yourself how you intend to use each card. Some cards are so useful that they’re going to make every deck, but the overwhelming majority of cards can go from stellar in a deck that maximizes their potential to just average in others. The best players in the world are masters of maximizing each card’s usefulness. And the first step to doing this is to detach yourself from the concept of shards and begin to ask which mechanic or mechanics can make the most of a particular card.

Since so many cards in this format work well under multiple different mechanical themes, it can lead to blending together multiple themes into one deck. The small green and white creatures work well with exalted, but they also can serve to feed a devour creature should the need arise. I shouldn’t even have to explain how unearth and devour seem like they were effectively made for each other. Thanks to this, it can be really easy to ignore the basic tenets of mana base construction. It’s really easy to lose yourself and end up with a deck evenly spread about three colors without much of a splash. It’s also easy to find yourself splashing a fourth color for a powerful three-color card that made its way to you.

Considering all the mana trouble it seems you can find yourself in, I was curious about the relative value of the tri-lands, Obelisks, and Panoramas. Personally, I value the lands really high, and can certinly see myself picking a tri-land first out of a pack.

“I probably overvalue them at this point,” Sadin admitted to me as I broached the topic. “I can routinely get the Panoramas around sixth or seventh, but I’d be willing to take them higher. And the tri-lands? I’ve picked them first before. It’s amazing that people are so willing to blame their mana problems on luck when there are tools like the Panoramas around to solve the problem.”

The Panoramas are a nifty treat. They serve the dual purpose of fixing mana while helping to thin your deck as well. They don’t even need to be all your colors to be optimal, either. In fact, since your main colors are far more represented in your basic land count, it’s almost better to have that Bant Panorama to aid your blue splash in your Naya deck. With the format seeming to push toward issues with mana, Panoramas provide an invaluable tool.

Hopefully this gave you a new way to look at drafting Shards of Alara and maybe a way of looking at the format that you hadn’t previously considered. The biggest problem you’ll face when drafting this format is focus. As I’ve said, it’s easy to get enamored with the immense amounts of synergy that you’re capable of producing, but, more often than not, you’re better off finding a primary purpose of your deck before worrying too much about a secondary one.

It’s like elephant building. If your deck wants to primarily be a devour deck, cut away as many parts as you can that don’t have a positive interaction with the devour mechanic. If you’re building an exalted deck, how big do you need your creatures to be? Is it better to take the random Cavern Thoctar or another Akrasan Squire? One makes every card in your deck better, while the other leeches off the cards already in the deck. It’s OK to include a couple leeches as long as your deck can provide them with enough things to leech off of.