Quarterfinals: “Get There!” Tsuyoshi Ikeda vs. Frank Karsten 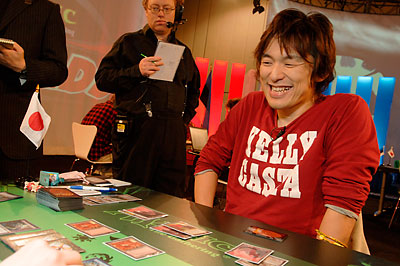 Tsuyoshi Ikeda praises the Faerie deck as ‘delicious.’Frank Karsten is much like a hometown hero. I know he’s from the Netherlands and this is the United States, but Karsten has a deep history not only with the game, but with American Magic as well. And there’s his stint writing a column here at magicthegathering.com as well. But for the Japanese, Tsuyoshi Ikeda is hero and more. Ikeda is a legend in his own right. He’s been on the tour forever as one of the first names in Japanese Magic, he owns multiples stores, named Fireball, across Japan, and he even became eligible for the Pro Tour Hall of Fame last year.

Karsten had a tough battle on his hands. He said he tested it the night before, and the results were slightly in favor of Ikeda’s Blightning Beatdown deck. “Slightly” might be an understatement. Ikeda’s been, in his words, “eating Faeries all year,” and across three formats too (Extended, Standard, and Block).

Why does he eat them so? “They’re delicious.”

Ikeda’s deck comes out of the gate quickly, and Karsten’s aggregate Faeries deck would need solid draws to stop the black-red madness. Ikeda said he’s only afraid of a double Scion of Oona together with a Sower of Temptation.

After Ikeda won the roll, and they both kept their openers, the Japanese player played a Figure of Destiny on turn one. Karsten’s Thoughtseize revealed Muderous Redcap, Blightning, and three land. Karsten took the Redcap and shipped. He then answered Ikeda’s Ghitu Encampment with a Bitterblossom. One life a turn, plus attacks, put the totals 11–20 in Ikeda’s favor, a few turns later.

Karsten had Spellstutter Sprite, Cryptic Command, Mistbind Clique, and Agony Warp. The ever-growing Figure of Destiny loomed large, but that would be just the first of Ikeda’s threats. Karsten chumped for a few turns and soon took a Blightning to the face. He wisely kept a land, and only had to lose it and the Warp, sinking to 7 on his upkeep.

Karsten’s Bitterblossom was playing a good Forcefield, but it had to go. In Ikeda’s next upkeep, Karsten championed the enchantment away with Mistbind Clique. Ikeda seethed, paused, then floated mana into his draw step. Flame Javelin on the newly minted Clique staved off that possible threat, and Ikeda was content at that.

Karsten dug and tapped with Cryptic Command, searching for the out. Four is a low life total for any deck. After calculating all possibilities, Karsten played Vendilion Clique in Ikeda’s draw step, revealing only one nonland card: Siege-Gang Commander. He took it without blinking and gave Ikeda a fresh card. After activating both Encampments, Ikeda swung into Karsten’s three Faeries and two untapped mana (one being the ever shifty Mutavault). He thought long and hard, but it was for naught. Immediately after blockers were declared, Ikeda revealed his Clique draw: Incinerate. Karsten simply scooped.

Karsten’s plan was a bit different. Not having dedicated hate for the matchup, Karsten planned to switch up numbers from game to game. Take out the Thoughtseizes on the play, but put them back in on the draw (Ikeda is a card down, and the spell had a better chance to hit Bitterblossom before turn two). After that he varied up some numbers, putting in some Infest but planning on taking them out if he played the card in the next game—hopefully making Ikeda play around cards he didn’t have. 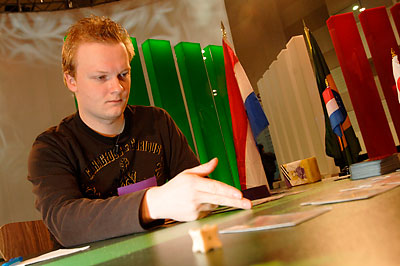 Frank ‘The Karstenator’ Karsten executes his plan.They both kept their seven, and this time Karsten led. Bitterblossom and Figure of Destiny squared off, but when Ikeda played his own ‘Blossom, the scales were left unbalanced. A few attacks later, the Figure was at 2/2 and the Karsten was at 16. He had his single Loxodon Warhammer in-hand, along with enough Faeries to start a clique, but he had to best figure how to get it done. On turn five he tapped for the Warhammer but left two untapped for his Spellstutter Sprite and passed the turn with one blocker, the Warhammer unequipped. Figure began to fulfill his destiny—becoming a troublesome 4/4, it went to the red zone along with another Faerie and Karsten simply blocked the bigger of the two. The Bitterblossom was again in “Forcefield” mode. Not an optimal position, but it’s much better than being dead. Even facing turn-one Figure, turn-two Bitterblossom, Karsten was still at a healthy 12.

Karsten thought for a long time, and at the end of his turn he purposefully flashed a Spellstutter Spirte to Ikeda. A kingly move, indeed. When Ikeda tapped down for an un-Stutterable Flame Javelin, Flashfreeze came down quickly. After a turn another end-step Javelin met a Cryptic Command (bouncing the Figure of Destiny). Ikeda didn’t mind; he just laid his fourth land (a second Graven Cairns to match his Mountain and Auntie’s Hovel) and swung with three flyers. Karsten thought. He had the potential life-gain on the board, but there was no way Ikeda would let an equipped creature live. This fact was verified when Karsten asked Ikeda’s hand size and he replied, “Six.” Karsten took the 3 damage, sinking to 6. He needed to win a spell war to have any shot at stopping Ikeda’s flying army; he had a good six mana to do it. He tried a Sower of Temptation. Though he cast Spellstutter Sprite on Ikeda’s first Magma Spray, the second took out the 2/2. After the fifth Bitterblossom token hit play for Ikeda the totals were 5–13, and they quickly crashed into the red zone.

Karsten had been monopolizing the game clock (if there were such a thing), and with good reason. Ikeda’s deck presses its advantage hard and fast, and Frank had to capitalize on every chance to even think about winning. On his next turn, Sower of Temptation was finally allowed to resolve, but it was too late. When Ikeda flashed two more burn spells in hand, Karsten new his own Bitterblossom would destroy him, even after such calculating efficiency. 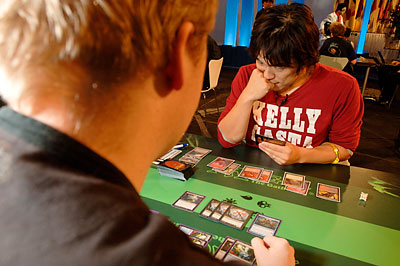 Ikeda chews, and chooses.Karsten was on the play again (so no Thoughtseize). Ikeda’s third turn-one Figure of Destiny was quickly stopped by an Agony Warp, his Vithian Stinger was Peppersmoked (with a cantrip from a Spellstutter Sprite), and the Boggart Ram-Gang elicited Warp #2. The Sprite saw some red zone action, lowering Ikeda to 15 thanks to two Sulfurous Springs. Ikeda unearthed the Stinger to pop Karsten’s blocker and swung with a Ghitu Encampment. A second Vithian Stinger was Cryptic Commanded away (netting a card for Karsten), and the empty board went back to the Dutchman.

That was a good thing for Karsten this late in the game. However, a second Boggart Ram-Gang quickly evened the life totals at 15, and now Ikeda had a threat. Sower of Temptation tried to take it, but double Magma Spray again trumped Karsten’s Spellstutter Sprite. Karsten finished his turn by tapping out for a Ponder and chose to shuffle, shaking his head when he drew his card.

The second unearthed Vithian Stinger cleared the way for Ram-Gang, and Kartsen was surprised and a bit shaken when Ikeda just passed. Why hadn’t he used his remaining lands to attack with the Ghitu Encampment? Did he really have that much burn? Ikeda said he just forgot, but Karsten wasn’t buying it. After laying a Mutavault, Karsten had two cards. That number sounds Blightning-worthy to me, and it sounded that way to Ikeda too. Karsten resolved a Scion of Oona in response before going to 9 and discarding his Remove Soul.

Karsten’s hand was empty, and Ikeda had three cards in his grip: a land and two Incinerates. Karsten agonized over whether to activate the Mutavault for the incoming Boggart Ram-Gang; with no hand, the choices were slim.

After going to time in thought, Karsten asked Ikeda, “Was that last attack step really a mistake?” Ikeda simply laughed.

He finally activated the Mutavault (3/3 with shroud thanks to Scion of Oona) and blocked. When Ikeda inevitably Incinerated the Scion, Karsten’s board was wiped.

Could his deck give him the outs? Oh, the cruelty of fate. His top card was Bitterblossom. Frank smiled. “Get there!” he shouted. It didn’t. 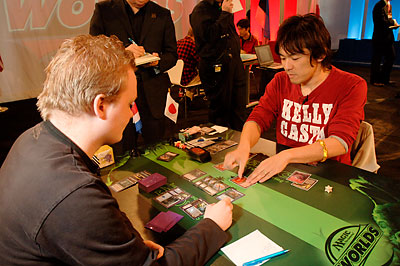 Tsuyoshi Ikeda defeats Frank Karsten 3–0 and advances to the Semifinals!