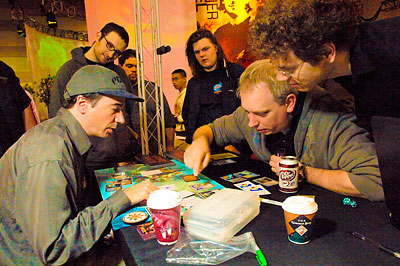 Aaron Forsythe, Director of Magic R&D, leans in to read Magic creator Richard Garfield’s cards. Players showing up to Challenge the Champs to play against the great Richard Garfield this weekend are in for a surprise. He’s put back on his designer’s cap and brewed up a deck full of cards you’ve never seen from a set that can never be. The set’s theme seems to be cards that wind up in your opponent’s zones, in a way that would make an Un-set proud. To showcase his bizarre creation for the viewers at home, he agreed to a best-of-three against Director of Magic R&D Aaron Forsythe. Forsythe, who likes powerful cards but also likes to keep things sporting, built a white-blue-black deck with 4 Reveillarks and a bunch of one-ofs.

As soon as they sat down, a crowd started to form, and soon people were craning their necks to read Garfield’s hand-drawn cards. Garfield set the tone of the match early, playing an island and The Ol’ Switcheroo.

Forsythe gamely tried it out on his turn, winding up with an Exchange Student.

Merfolk Saboteur
1U
Creature – Merfolk
T: Take the top card of target opponent’s library and put it into your hand. Put Merfolk Saboteur on top of that player’s library.
1/2

Forsythe evoked Mulldrifter for two cards, then passed it back, and again had to read a card.

By now you can see how this match would progress: In a spiral, further and further into madness. Garfield put his Saboteur on top of Forsythe’s library for a card, played another, then showed his deck’s darker side.

Harmonic Barbs
1W
Enchantment
Whenever an opponent draws a card they do not own, Harmonic Barbs deals 2 damage to that player.

Not exactly a quick path to victory with the Saboteur, but doubtless there were other interactions in store. Forsythe, ever the killjoy, played Bitterblossom and the Saboteur. Garfield had no fourth-turn play and Sabotaged Forsythe again. Forsythe returned the favor and played out Reveillark. 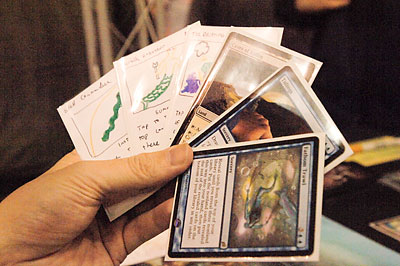 Tax Assesor
2W
Creature – Human
T: Target player loses 1 life for each card in hand they do not own.
1/3

Mixed Thoughts
2U
Sorcery
Choose one – Draw a card, or draw a card after the rest of this spell resolves.
Exchange hands with target player. Then, the player with fewer cards takes cards from the other player’s hand until they have as many cards in hand as they had before the exchange.

Unfortunately, he had no flying defense, and Forsythe’s beaters were bringing the pain. Worse still, Forsythe’s Saboteur had stolen one of the deck’s bombs:

Disputed Island Farm
Land
T: Add U or W to your mana pool.
Whenever a land would come into play under an opponent’s control, that player may take control of this, untapped. If they do, that land comes into play under your control instead.

Merfolk Agent
U
T: Take a card at random from target opponent’s hand and put it in yours. They gain control of Merfolk Agent.
1/1

Forsythe Pondered, and Garfield played out Merfolk Saboteur. Over the next two turns he mixed things up for both players, giving Forsythe the Agent, and getting via the Agent the third land he so desperately needed. He used it to play Knight of Meadowgrain. Garfield was ready with another tricky play.

Man-O-Warp
2U
Creature – Jellyfish
When Man-O-Warp comes into play, put target creature an opponent controls into your hand, then put a creature you control into that player’s hand.
2/2

It gave Forsythe the Agent and Garfield the Knight of Meadowgrain. They played out the other’s cards. On his next turn, Forsythe tapped four.

Forsythe narrowed his eyes at him. “It’s one of your children!”

He grabbed four blank cards with “GUNK!!” written diagonally across them and stuffed them in Forsythe’s deck. Forsythe was more direct. Wispmare killed Oblivion Ring, and Reveillark returned to play under HIS control. Garfield was displeased. He needed more powerful cards, so he cast Mixed Thoughts. This got him a Reveillark of his own, and they smashed into each other.

Clone returned to play as Knight of the Meadowgrain, and Man-O-Warp gave it to Garfield, with a lowly Agent for Forsythe. He needed more heavy hitters, and so played Peacemaker, stolen from Garfield’s deck.

Peacemaker
3W
Creature – Human Soldier
If Peacemaker deals damage to an opponent, you may exchange control of it for target creature that player controls.
3/4

Garfield seemed to struggle. Forsythe’s attacks continued and Garfield’s life fell. Wall of Illusion got Garfield the Knight of Meadowgrain, however, and with the help of Elspeth, Knight Errant, began to fly overtop, gaining life in 5-point chunks. He no longer had enough creatures to attack profitably.

Garfield continued his stabilization and showed off another mindbending trick. 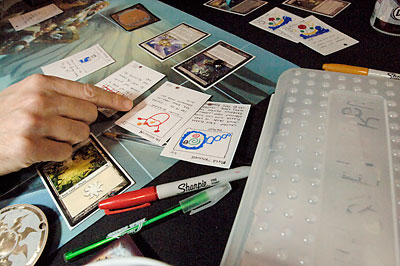 The next turn a Merfolk Agent on Forsythe’s side found him a second copy, and he decided to return the favor. The bad news was that Garfield had drawn a pair of Forsythe’s new Gunk Cards, which he was all to happy to give back in exchange for the Merfolk Agent. He also let Garfield steal Windbrisk Heights with The Drifting Land and attack with enough creatures to activate it, getting out Reveillark. That just cleared the path for a Sower of Temptation to steal the Reveillark back. At this point there was no telling what side of the board cards were supposed to be on.

Man-O-Warp finally got the Knight back from Garfield and stopped his life gain. Garfield made tokens and stayed on the defensive, getting ready to activate Elspeth’s ultimate ability. He did so, and flashed a Wrath of God stolen from the top of Forsythe’s deck. Forsythe, ever the wet blanket, had Negate to stop it.

Richard Garfield will be playing again on Sunday, so be sure to come down armed with cards you’re willing to have played against you. 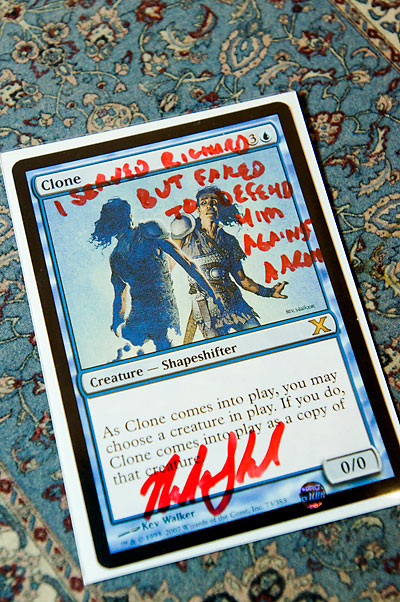