2008 Worlds Feature: Rookie of the Year 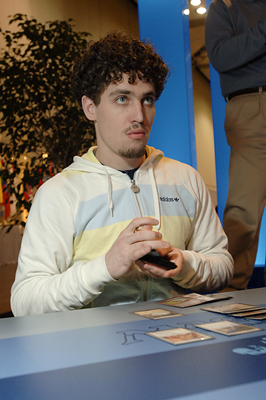 Aaron Nicastri was the Rookie of the Year frontrunner heading into the tournament, but he hasn’t locked it up yet. This year’s Rookie of the Year race turned out to be surprisingly hot. Australian upstart Aaron Nicastri burst onto the scene with some solid Pro Tour and Grand Prix performances as well as winning his national title. The 2008 season marked the first time in which finishing highly at the event could earn participants pro points, and Nicastri took advantage. A world tour of premier level events left him with 21 pro points headed into the World Championships.

Unfortunately for Nicastri, Tim Landale and Tyler Mantey of the U.S. Both had amassed 20 points and were well within striking distance of Nicastri, though Aaron had an advantage in that he would earn extra points from the team competition at Worlds. Two other players, also rookies and national champions, threatened to do the same with Belgian Pascal Vieren and Canadian Dan Lanthier captaining their teams with 16 and 17 pro points respectively.

By the time the smoke had cleared at the end of Saturday play, however, it was two dark horse candidates giving Aaron a run for his money. Hannes Kerem of Estonia managed a powerful run to within striking distance of the Top 8, in addition to being a member of his national team. He had entered the weekend with 12 points, but when Estonia fared poorly in team competition, was left hoping for a strong individual performance to win the title. Luiz de Michielli of Brazil started Worlds play with 14 points but, as a result of being a member of his national team and having a strong run in individual play, was also in contention.

After the final round, the numbers broke as such: Team Australia and Team Brazil both made the Top 4, and would play on Sunday. Unfortunately for de Michielli, he failed to win the last few matches he needed and fell to 16th in the individual competition. That meant he would earn 8 points which, combined with his 14 from the beginning of the weekend gave him a total of 22. Even if Brazil won the team competition, he would only get 6 more points, leaving him with 28.

Meanwhile leader Nicastri was just behind de Michielli in the standings at 17th. That netted him 7 pro points and put his total to 28. Unfortunately for de Michielli, that means Nicastri would for certain beat him by earning at least 4 points for making the Top 4 of the teams competition. Despite his fantastic last-minute run, Luiz de Michielli had lost out. Nicastri, meanwhile, looks to safeguard his total. Guaranteed a minimum of 32 points, a Top 2 or Teams win would mean Nicastri finishes the weekend with 33 or 34 points. 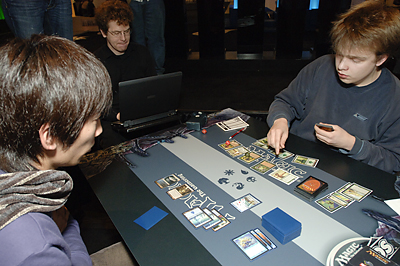 Hannes Kerem, right, faced Japanese fixture Masashi Oiso in Round 13. Hannes Kerem, who failed to net points from the team competition, can still catch up to Aaron, though in a challenging fashion. With his Top 8, Kerem earns at least 12 points, bringing him to 24. To catch Nicastri, however, he needs a minimum of 32 points. Top 4ing on Sunday will only take him to 28, so Kerem must make the Finals of the World Championships to have a shot at the title. If he finishes in second place and Nicastri loses the first round of the team competition, the players would tie at 32 points each and force a playoff. If Kerem wins the World Championships, he will be the Rookie of the Year outright. The final scenario sees Kerem do no better than 2nd and Nicastri’s Australians make it to the second round of team play. If that happens, Nicastri will lock the title up.

Down to the wire, an exciting end to an exciting race. You can’t ask more from the World Championships!