2008 Worlds Feature: Setting Up the Scoreboard

Alrighty, armchair sports fans, let’s get you up to speed with what to look out for in the races that matter as we head down the home stretch of Extended. 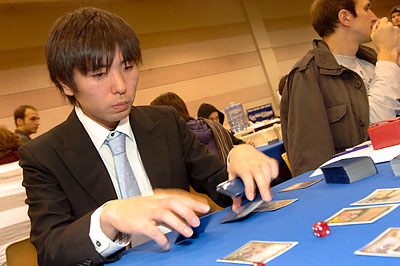 Shuhei Nakamura is not having his best weekend, but he remains the Player of the Year frontrunner.Let’s start with the headline news: The Door Is Open. Shuhei Nakamura spent two unusually barren days trying to defend his substantial lead in the race, and goes into the final day at 15 points with a negative 5-7 record in 222nd place. To give you some idea of how far off the pace that is, even with a 6-0 Extended performance, he would find himself on the same points as the current leader Ervin Tormos with six rounds in hand. It’s safe to say that today is Nakamura’s last play of the season.

That means that the two-part plan of making Top 8 and winning the whole thing becomes highly relevant for his four challengers. Well, not four challengers, since Tomaharu Saito fared even worse than his countryman, finishing Day Two right in the basement in a quite astonishing 315th place. Luis Scott-Vargas comes into Extended needing a standout performance, something he’s well capable of. He currently sits in 74th place on 21 points, but with the field closing ranks it’s not yet out of the question that he could find himself yet again in Sunday action.

The two remaining contenders came into the event with the advantage of having the team event to generate extra points, at least in theory. Portugal sit in 37th place, meaning Marcio Carvalho is unlikely to receive much help. Like Scott-Vargas, he has 21 points, and surely can’t afford another loss. What of France? Seems there’s no support for Olivier Ruel either, since they stand 31st after the team portion, a long way from the Top 16 that could start to generate points in the Player of the Year race. Still, Olivier may not need them. Starting the day on 28 points, he is currently inside the Top 8, in 7th. As the rounds tick by, that single point for the draw may start to look much more like a point gained than two lost. Talking to him this morning, it’s clear that he’s under pressure, but pressure is something he generally handles well.

Conclusion: Keep an eye on LSV and Marcio, but any further losses practically eliminate them. It’s Olivier versus the wire to keep the race alive going into Sunday. 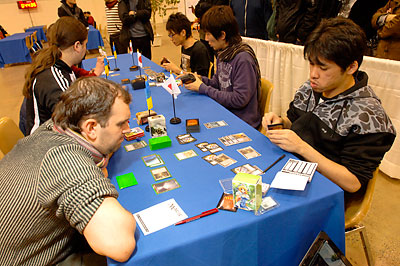 Team Ukraine and Team Japan in action.Sharing the lead are Japan (no surprise) and Denmark (surprise). Both Rune Martens Andersen and Anton Lunau have 8-4 records, and crucially were undefeated across four team rounds, with a draw against the Philippines the only blemish. It’s in the individual competition that Japan has starred, with Masashi Oiso on 10-2, Yuuya Watanabe at 8-4 and Akihiro Takakuwa on an even 6-6. Poised right behind the two joint leaders are South Korea and the United States. The South Koreans had three wins and a draw across the team rounds, while the U.S. will look to make wins over Mexico, South Africa, and Ukraine count in the final reckoning. In total, thirteen teams sit within a dozen points of the lead, and although it’s really tough to close the gap (18-point swings between countries are highly unlikely in any given round), there’s still a ton to play for, especially with the Top 4 advancing to Super Sunday. 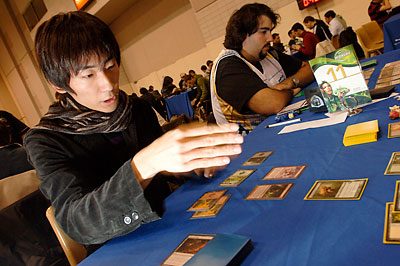 Masashi Oiso, head of the Japan National Team, is in second place heading in to the Extended portion of the tournament.A Top 8 lineup of Ervin Tormos, Masashi Oiso, Tsuyoshi Ikeda, Paulo Vitor Damo da Rosa, Hannes Kerem, Marijn Lybaert, Olivier Ruel, and Justin Cheung would make for an incredible Sunday. The Estonian National Champion Hannes Kerem and Australian team member Justin Cheung would be the surprise inclusions, but the rest have phenomenal achievements in the game. Fact is, with six full rounds to come, none of these can feel secure, with even the 11-1 leader Tormos needing several wins in Extended to lock his seat at the final table. Cheung shares 27 points with 15 others, including Ben Lundquist of the USA, European heavyweights Frank Karsten and Martin Juza, deck-builder extraordinaire Manuel Bucher, and a string of top Japanese players—Osamu Fujita, Koutarou Ootsuka, Yoshitaka Nakano and Kenji Tsumura among them. At least another 20 names come into the mix from further back in the field, and the only certainty is the uncertainty.

Conclusion: Someone in the current Top 8 will still be standing when the dust settles, but it might not be many of them.

Important Conclusion: Take the phone off the hook, close the door, get in the munchies, and glue yourself to your PC screen (disclaimer: don’t take this literally), as the best in the business round the home turn.