After six grueling rounds and two skill-testing drafts, the dust has settled and only three players have escaped the flying cardboard unscathed. Antti Malin from Finland has already proven that he has the Limited chops to succeed at this level with a Top 8 finish at the Kamigawa Draft Pro Tour–London in 2005, so his perfect performance here shouldn’t come as too much as a surprise. Theodoros Liapatis has proven that his first breakout performance, taking the Greek national title, was no fluke, as he’s managed to navigate his way to a perfect record as well. Rounding out the trifecta is Ervin Tormos, who happens to have added his 6-0 Draft record to an already impressive 5-1 run in Standard. That amazing 11-1 record has secured him a position alone atop the standings, which has given him a little bit of breathing room come tomorrow. 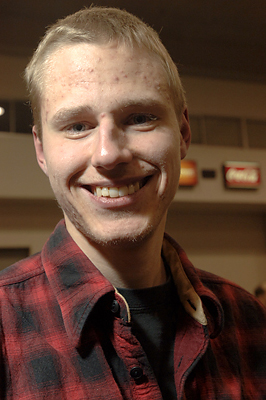 Antti Malin made Top 8 at the Limited PT–London in 2005.It had been remarked to me, once upon a time, that the best way to win in this format was to draft the white and green cards. Apparently, word made it to these three as well. Of the six decks they drafted, a whopping four of them featured the little men and big monsters of Naya. Malin and Liapatis shared their thoughts on putting the deck together.

“The key is to have as many good, cheap creatures as you can,” Malin said pointing to his Wild Nacatl and Knights of the Skyward Eye. With a finger on the Knights, he informed me that he had gone so far to stay with his strategy that he had first-picked one.

A good skeleton for a Naya deck tends to be filled on the low end with cheap, efficient creatures like Wild Nacatl, Akrasan Squire, and Knights of the Skyward Eye. The Knights are particularly good since they transform into monsters in the late game. They want to pack a few fat bodies at the top end of the curve, and no body is better than the Bull Cerodon. “The best common is definitely Oblivion Ring, but the best uncommon is definitely Bull Cerodon. It’s so big and so fast,” an animated Malin gushed.

Malin also has an interesting take on how the deck should handle mana.

“I like to play 18 lands, even if I have a fast, aggressive deck. One of the main things that aggressive decks lose to is missing land drops and having to slow down.”

He talked with me about the signals he looks for in the mid-early part of the pack that let him know that Naya is there for the taking.

“Woolly Thoctar, Wild Nacatl, and Knight of the Skyward Eye. The Knight may actually be the best of the three.”

His deck ended up being a nice blend of the cheap, aggressive version of Naya and the beastly monster version. His multiple copies of Knights of the Skyward eye helped to fill the gap between the two, and were invaluable due to their ability to play both roles.

Theodoros Liapatis won his first pod with a quick version of the Naya deck, which won through an absurd burst of creatures backed by pump.

“I killed one opponent on turn five with a double Sigil Blessing!” When I asked him to name the card he wants the most (that isn’t simply wanted by every deck that can play it, like Oblivion Ring and Branching Bolt), he was quick to point out Naya Charm. I asked him which ability he used the most, and he didn’t miss a beat before pointing to the last one. “I won at least one match with it, and it combos so well with Sigil Blessing. Tap all your guys, Blessing, kill you.”

His final deck of the day was quite fantastic as well. It wasn’t anything incredibly spectacular (read: no bombs), but the strength of the synergies in the deck powered it through. It was a base Grixis control deck, which I’d been dying to get a good example of. The only Grixis decks I’d been able to draft are the really aggressive red-black decks that just use an unearth swarm to overrun people. This Liapatis’s deck was far more of a control deck, and I liked what I saw. It had multiple copies of Bone Splinters, a bunch of solid unearth creatures, and a good amount of bounce. The deck was chock full of removal.

“I won my matches mostly by removing all of my opponent’s creatures and unearthing one of these,” he said indicating an Undead Leotau. “I really don’t like this card in the aggressive deck, but it’s great in the control deck. Especially with my Death Baron.”

Things took a little bit to come together for him, though. His first picks were a Resounding Thunder and an Executioner’s Capsule. “I thought I might me Jund. I like Jund. Then I saw an Agony Warp, and then another, so I decided to move into Grixis.” What really set his deck apart, though, was his decision to splash white for a Knight-Captain of Eos and Kiss of the Amesha. “Kiss is just so good against aggressive decks. And the Knight-Captain serves a purpose, too. My deck wasn’t very fast and didn’t have any consistent way to deal with bombs. If someone played a Broodmate Dragon or a Predator Dragon, I was just dead. Both Kiss and the Knight-Captain provide me a couple of turns to turn the situation around. They let me cover my deck’s weakness.”

Despite his good performance with the deck, he told me that he didn’t really like to draft Grixis. “It just doesn’t have any really good bombs that are specific to Grixis. Also, everything in the deck dies to red’s removal.” 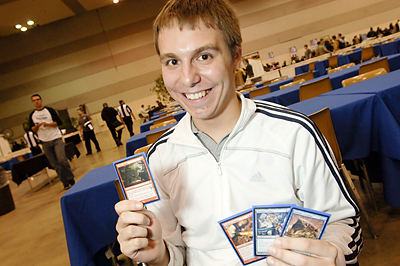 Ervin Tormos cleaned up with Goblin Assault.Ervin Tormos might disagree with Liapatis about Grixis. His last draft deck was a Grixis deck packed with double Vithian Stinger, double Fatestitcher, Kederekt Leviathan, Sharding Sphinx, and a Predator Dragon. He threw more bombs around in the last three rounds than Brett Favre when the Jets are down.

“Honestly, I felt like I was cheating,” Tormos laughed as we talked about his deck. It was easy to see why. Virtually every card in his deck was incredibly solid, and he got to punctuate it with his fat stack of bombs. The best part was that the cards just fell into his lap. He did have to pay attention, though.

“I think that forcing colors is a terrible idea. Drafting basically comes down to you and the person to your right. There are cards and colors that they just don’t want and are willing to take pains to avoid it. That’s the color you want to be in. Obviously, if no one wants the cards, they’ll fall right to you.”

That’s the essence of the reactive draft strategy that has served him so well this weekend. Part of the key to making it work is to be mindful of your mana.

“I really like to take mana fixers high. Once you’ve got your colors figured out, you can start to take them to make sure you can cast the spells you are being fed.” You can even go so far as to simply take the best card in the pack, grabbing a tri-land or a Panorama if there isn’t a better option, and just trying to observe the colors that are trending your way. “I like to be the last person at the table that’s decided a color. That way, I know what everyone else has decided to avoid.”

A good thing about this strategy is that it allows you to remain flexible with your opens. If you open a bomb, you can feel free to take it.

“Once you know your colors, the rest falls into place.”