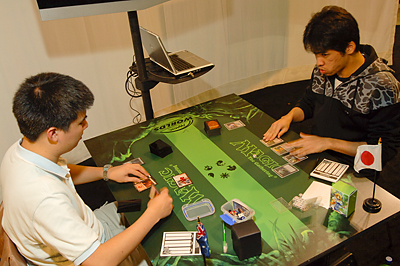 Australia’s Brandon Lau and Japan’s Yuuya Watanabe face off in Standard.When I was asking the players how they finished in the individual portion of Day One, Lau spoke up first. “I went 3-3. My teammates both went 6-0 and carried me.” Watanabe took his Faeries deck to a 4-2 finish before saddling up and taking a seat in the Feature Match for this round.

Lau, playing a red-white aggro-control deck featuring Figure of Destiny, Ranger of Eos, and a bunch of good utility one-drops, got on the board first with a Figure of Destiny that attacked Watanabe for 2 on the following turn. Watanabe had to mulligan, but his second hand provided him the ever-important Bitterblossom for his second turn. He also had a Scion of Oona to enlarge his troops. Lau sent his Figure again, but not before making it a 4/4. When Lau tried to make a Mogg Fanatic to deal with the Scion, Watanabe had a second one in response to turn his Fanatic into a total blank.

Lau used Ajani Vengeant to press his temporary advantage by locking down one of the few sources of colored mana to which Watanabe had access. The planeswalker had only one turn to live, though, since the Scions ran over and trounced him pretty soundly. Lau made a second Figure on the following turn and began the process of building it up. During Lau’s upkeep, Watanabe made himself a Mistbind Clique and forced Lau to use his mana to level one of his 4/4 Figures up. In order to do this, and give himself a blocker in the process, Lau had to use three Battlefield Forges for colored mana. This, combined with the air force that had been steadily growing over the past few turns, was good enough to finish things off for Lau.

The second game started out quite similar to the first, albeit with a little less mulliganing. Things diverged a little when a Wispmare from the sideboard came down to kill Watanabe’s second-turn Bitterblossom. Watanabe was not a man to be stopped by a lowly Wispmare, and a second copy of the powerful enchantment took the casualty’s place. He was even prepared for the Vithian Stinger that followed and threatened to keep his Bitterblossom in check. A Broken Ambitions countered it, though he could always unearth it if he found a suitable target at a later time. He even managed to deal with a 4/4 Figure of Destiny by Sowing some Temptation. The Sower of Temptation met its end after running into a Wispmare and an unearthed Vithian Stinger, but he casually replaced it. It seemed that he had backup for everything.

When Lau tried to kill the second with an active Stinger and a Mogg Fanatic, Watanabe played the Scion of Oona he’d been holding, which made the Fanatic’s sacrifice for naught. Things didn’t seem like they could get any worse for Lau, and it turned out they didn’t need to. Facing down a growing army that he had somehow contributed to, Lau was forced to concede. 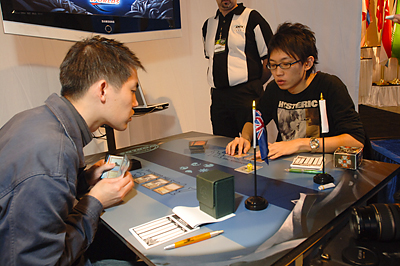 Justin Cheung leans in to check out Akahiro Takakuwa’s board.Cheung brought a green-blue-black threshold-ish deck to compete against Takakuwa’s mono-white Smokestack deck. This match was not nearly as entertaining as I had hoped from a Legacy matchup, but it certainly illustrated some of the sick things you can do in the format. Takakuwa was forced to mulligan to five in the first game, and Cheung took no mercy on him. Four consecutive sac lands meant a fourth-turn Tombstalker. With Takakuwa stuck on two lands and unable to play anything, the giant Demon (not to be confused with a Giant Demon) just turned sideways four times and the game was over.

The second just went to demonstrate how insane Tarmogoyf can be. Takakuwa managed to get an Armageddon off, but he didn’t have the Crucible of Worlds / Wasteland lock to keep Cheung out for good. Consequently, Cheung was able to get back to two lands and drop a pair of incredibly big Tarmogoyfs into play. A few swings later, and the incredibly one-sided match was over.

Nicastri started off pulling slightly ahead by using an Engineered Explosives to put Oiso’s Chrome Mox down for the count. He also was the first of the pair to get his Urzatron online, and used his glut of mana to play a Gifts Ungiven and even pay for the Condescend Oiso played to try and stop it. He got himself a Sundering Titan and a Makeshift Mannequin for his troubles, and sent a Tolaria West and a Mindslaver to his graveyard. The Titan resolved on his next turn and dropped Oiso to a mere three Urza’s lands and two Dimir Signets. He made a Crucible of Worlds to help him recover and used Damnation to clear away the Titan after taking a hit and completing his own Tron. That left him enough mana to Spell Burst a Makeshift Mannequin with buyback. 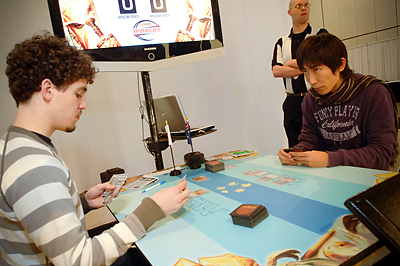 With a split in the first two matches, it’s down to Aaron Nicatri and Masashi Oiso.Now that he had the Spell Burst online, it was a mere matter of turns before he assembled the pieces he needed to win. Ultimately, he got an Academy Ruins into play and finished things off by playing a Gifts Ungiven that Nicastri didn’t even give him a chance to resolve. Oiso’s three copies of Thirst for Knowledge were the difference makers in this game, allowing him to keep his hand full as Nicastri slowly ran out of gas.

In Game 2, Nicastri got to stunt Oiso’s development for a second time, this time by stopping a Dimir Signet with Annul. He also got Tron first, once again. He hoped this time, it would actually mean the difference between a win and a loss. It allowed him to get a fast Mindslaver, but Oiso was ready for it with Trickbind. He followed up the Trickbind with an Extirpate to remove Nicastri’s Mindslavers, and in a split second, Nicastri had lost one of his paths to victory. The Extirpate did reveal a monster of a hand, though, including a Spell Burst, Condescend, and a Sundering Titan to play with his boatload of mana.

After imprinting his Chrome Mox with the Condescend, Nicastri made a move and dropped Sundering Titan into play. Unfortunately, this left him unable to deal with the Gifts Ungiven Oiso played in response. He got himself a Sundering Titan and a Thirst for Knowledge and sent a Crucible of Worlds and his missing Urza’s Power Plant to his graveyard. He then used the Thirst for Knowledge to trade his fresh Sundering Titan for a three brand new cards. Now that Oiso was finally tapped out and out of options, Nicastri’s Sundering Titan resolved, removing all of Oiso’s colored mana sources. The next two turns provided Oiso with nothing but a face full of Titan, and the second game went to Nicastri.

By this point, the other matches were finished, and a serious throng had formed around the really cool-looking Bant shard of the Feature Match area. As some of the other Worlds competitors edged as close as they could to get a glimpse into a possible deck for Saturday, Paulo Vitor Damo da Rosa caught Nicastri’s eye. Realizing that da Rosa had seen the two nearly identical decks, Nicastri joked, “Welcome to the anti-Elf Extended,” which met a decent chuckle from the crowd. 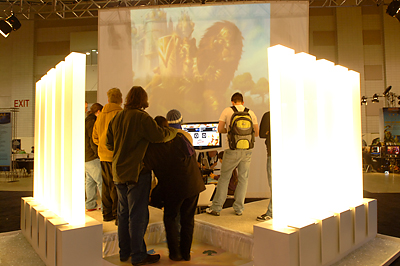 The Bant shard of the feature match area.[.jpg, align=left, cap=“”]In Game 3, Nicastri’s first seven held only an Urza’s Power Plant for lands, and so he was forced to settle for a vastly improved six-card opening hand. He started on the draw with an Urza’s Tower and a Chrome Mox imprinted with a Thirst for Knowledge. That left him ready for a possible second-turn Dimir Signet. Instead of a Signet, Oiso had an Engineered Explosives to repay Nicastri the favor from the first game. He waited a few turns to blow it, after both players had proven to be stuck at four lands. Oiso was fortunate enough to come up with two Signets during that time, thus was ahead on mana, but Nicastri soon began to draw lands and got himself back into things as well. He eventually caved and played the Tolaria West that he’d been trying to drum up the second blue mana for and was rewarded on his next draw with the Urza’s Mine for which he would have transmuted. That got a little laugh from Oiso and what I can only assume was Japanese for “How lucky!”

Now that he had some mana to play with, Nicastri used a Gifts Ungiven to fetch a Polluted Delta and an Annul, which Oiso gave him over a Spell Burst and Thirst for Knowledge. The Delta went along with the Crucible of Worlds in his hand to start thinning his deck out a bit. Oiso used an Extirpate to deny Nicastri his Spell Bursts. As the Extirpate finished resolving, time was called for the match. Since neither player had any sort of presence on the board and a million cards in their respective grips, Nicastri astutely came to the conclusion that “neither of us can win this match.” They played out a couple more turns for posterity’s sake before Oiso agreed with him and accepted the unintentional draw. How fitting that two national champions who came into this round undefeated playing nearly identical decks should leave with a draw.

Team Australia and Team Japan break even with a record of 1-1-1.