“I’ve never been to a Grand Prix, and this is my first Pro Tour,” Adam Katz pointed out to his famous opponent as they sat down to play.

“How’d you do this weekend?” Paul asked, keeping the conversation polite. 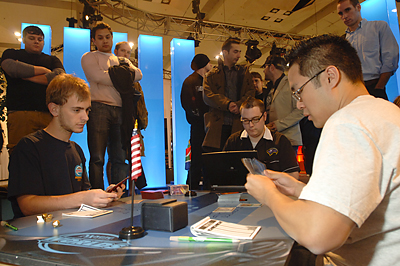 Adam Katz of South Africa and Paul Cheon of the United States attract a crowd.Goblin Lackey was the first play of the game, coming from South African National Champion Adam Katz. Paul Cheon responded with a Brainstorm, either actually trying to find a Force of Will or bluffing it. Whichever the case, he opted to let the 1/1 resolve, then spent his turn playing a Sensei’s Divining Top. Katz’s first attack with the Lackey allowed him to plunk a Siege-Gang Commander into play, then he made his second land drop in the form of a Wasteland, using it immediately to blow up one of Paul’s lands.

Under the gun, Cheon dug in, spinning his Top and activating a Flooded Strand to shuffle up a new set of three. He decided to go for it, playing a Phyrexian Dreadnought and using Stifle to allow it to enter play without having to sacrifice any creatures. Unfazed, Katz nodded, then used Swords to Plowshares to RFG the 12/12. Cheon cashed in his Divining Top for a chance at a mercy Force of Will that would allow him to counter, but didn’t find it waiting on top of his library.

Katz’s next attack left Cheon at 24, thanks to the life gain from Swords to Plowshares, and he added a Mogg Fanatic and Goblin Warchief to his board. Still, Paul was stuck on just two Islands and when Katz played a Goblin Matron the following turn, Cheon scooped his cards, too far behind to catch up.

“So, is this matchup terrible?” Adam asked as he and his opponent shuffled for the second game of their match.

“I have no idea,” Paul responded.

“Did you guys test for Legacy at all?” Adam pressed further.

“No. I don’t think anyone did,” Cheon responded. Katz didn’t reveal whether his team had spent additional testing time on Legacy or not, though he had claimed during the first game that the only other time he had ever played Legacy was with a Ravnica Block deck years ago. 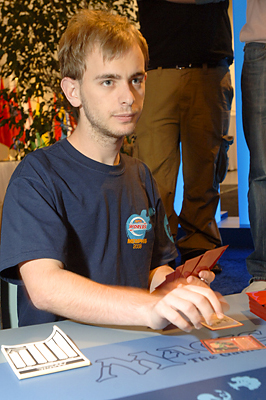 Adam Katz, South Africa National Champion.Katz kicked off the second game with another first turn Goblin Lackey, but Cheon was ready, using a Blue Elemental Blast to destroy the 1/1. Paul followed that up with a Standstill, meaning he would likely get a de facto Ancestral Recall when Adam was forced to break parity in order to get an offense going. The South African captain didn’t do so immediately, however, using his second turn to Wasteland a Paul Cheon Volcanic Island. When Adam did finally flinch in order to play Goblin Piledriver, Paul happily drew his triple set of new cards before allowing the 1/2 to resolve.

The Piledriver was quickly dwarfed as Cheon played a Phyrexian Dreadnought and used Trickbind to keep the 12/12 around. When Adam revealed Disenchant to kill the monstrosity, Cheon showed that he had Force of Will.

“That wasn’t supposed to happen,” Katz offered with a smile.

Cheon attacked with his team to put his opponent at 6, then used Wasteland to remove Adam’s only source of white. Katz moved to the top of his library, ceremoniously flipping the top card of his deck into his hand. When it wasn’t whatever miracle he had been looking for, however, he nodded politely and said, “That’s game.”

As the two players shuffled for the final game of the match, the reports came in from the crowd on how their fellow countryman were doing. In the Standard realm the Americans were down 1-0, while the South Africans were in an 0-1 hole in Extended. It looked like the match could very well be decided by what happened between Cheon and Katz.

On the play for the first time in the match, Adam opened on a second-turn Goblin Piledriver with a Rishadan Port as one of his lands. Cheon allowed the 1/2 to hit play despite holding counters, using Brainstorm to dig for some action the following turn. When Adam followed up with a Goblin Lackey, the crowd was surprised to see Paul still hold his counters. Whatever plan Cheon was crafting, it was bound to be a good one.

The former U.S. National Champion Cheon used his Wasteland targeting his opponent’s Rishadan Port to prevent Katz from restricting any of his mana, then played Mishra’s Factory. The original Mutavault promised to make life difficult for Katz’s Goblin horde, and rather than risk losing his Lackey, the South African simply shipped the turn back without attacking. Cheon tapped out for Trinket Mage, but was surprised to see Katz had a counter in the form of Red Elemental Blast.

With his opponent tapped out from the Mage, Adam took full advantage. His attack dropped Cheon 4 points and plunked a Siege-Gang Commander in play. Things looked pretty good for Katz, but Cheon quickly turned it around by revealing why he had been slow-rolling the counters all game: a Pyroclasm wiped the board of all Adam’s Goblins. Stuck on just two Mountains, Katz was forced to play draw-go, suffering from Mishra’s Factory beatdown all the while. When he finally found a third land and went for a Goblin Warchief, Cheon used his first counterspell in the form of Daze to nail the 2/2.

With momentum firmly in his favor, Cheon went on the beatdown path sending two Mishra’s Factories into the red zone and using a third to pump. When Katz played a second Goblin Warchief, Cheon simply allowed it to resolve, bashing back to send the score to 11-2 in his favor. Needing some help, Katz used two-thirds of his mana to play Goblin Matron, tutored up a Goblin Lackey, then used his final red source to play the 1/1. “You’re at 11?” he verified with his opponent. Cheon nodded, and Katz sent the 1/1 into the Red Zone. The Lackey connected, and dropped a Goblin Ringleader into play. Adam had enough blockers to survive the turn, but only hit a single free card from his Ringleader. 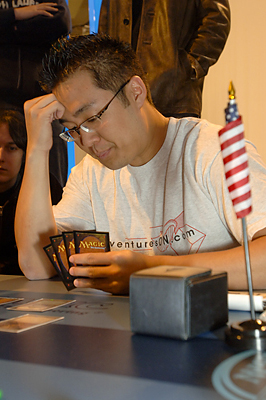 Paul Cheon is representing the U.S. at Worlds for the second time.The game that had seemed in the bag a moment before now took some pause from Paul Cheon. He was still in good shape, but he needed to find a way to remove his opponent’s blockers in order to take things home. While not quite an immediate win, his combo of Phyrexian Dreadnought and Stifle meant Adam Katz was facing a two-front battle. He needed to solve the problem of Cheon’s creature-lands while at the same time dealing with a 12/12 trampler.

Playing a second copy of Goblin Matron, Katz tutored up a Siege-Gang Commander. He then used a Swords to Plowshares to RFG his opponent’s Dreadnought and bashed with the team, putting a free Siege-Gang Commander into play. Paul took the hit, then untapped and played an Engineered Explosives set to zero. By paying two, he blew up his opponent’s Goblin tokens, with enough mana left over to get in for lethal with his Mishra’s Factories. Realizing he was defeated, Katz extended his hand.

After their match, American team captain Michael Jacob wandered over, team flag in hand. “Did you win?” Paul asked.

“Yeah,” MJ responded, meaning the Americans had won the match. Moments later Sam Black managed the come-from-behind to give the Americans a clean sweep as they advance to 2-0 on the first day of team play.