The fourth round of team play on the weekend saw a monster pairing between two of the world’s greatest Magic playing countries as Team Japan squared off against Team America. As the players shuffled, Pro Tour Manager Scott Larabee stopped by to drop off their team flags. The markers, used to designate for spectators which team is which, are generally the responsibility of the team captains to pick up each round. 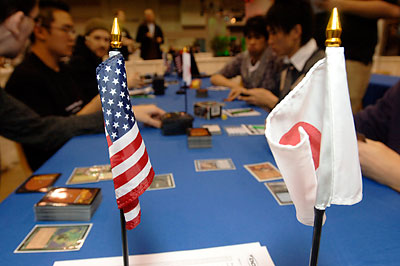 It was hardly a surprise to see Japan and the U.S. at the top table in the final team round. “You know, we don’t ask for much...” Larabee teased the teams with a smile after both captains had forgotten to pick up their team’s flags.

So far on the weekend Japan’s record has hinged entirely on captain Masashi Oiso’s performance. Yuuya Watanabe was undefeated in teams while Akahiro Takakuwa had yet to win a match. Masashi meanwhile was 1-1-1, leaving the team with exactly that record. The Americans, on the other hand, were undefeated.

Sam Black’s Elf Ball deck came right out of the gates with an early team that included Heritage Druid, Nettle Sentinel, Elvish Visionary, and Wirewood Symbiote. Oiso, the Japanese team captain, was piloting a home brew Blue-Black Tron build and accelerated his mana with Dimir Signet. When he reached four mana, he used a Damnation to blow up his opponent’s team. Sam opted to save his Elvish Visionary with Symbiote, but was missing land drops, stuck on only two.

Trying to put things away, Oiso used a Gifts Ungiven to find his two missing Tron pieces, Triskelion, and Damnation. After conferring with his teammate Paul Cheon, Sam opted to give his opponent the lands. Unfortunately for the American, Oiso was ready for that play with a Makeshift Mannequin to return Triskelion from the grave. That would keep future Elves contained, and still short on mana Sam Black was scrambling to keep up.

Over the course of a few turns he played Wirewood Hivemaster and Elvish Visionaries to try to make up some ground, but the Trike mowed down the Hivemaster. When Sam landed a Wirewood Symbiote, however, he made things interesting. Oiso tried to kill the 1/1, but Black used it to bounce a Visionary. The creature he targeted to untap? Oiso’s Makeshift Mannequined Triskelion. Targeted by a spell or ability, the robot was doomed to return to the graveyard, but not before a parting shot to take out one more of Sam’s Elves. 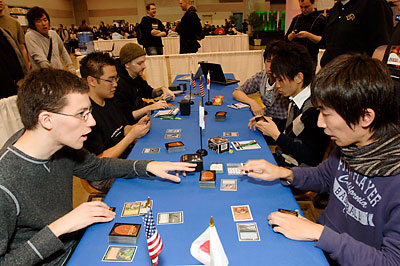 Black couldn’t make much headway vs. Oiso. The techy play was well thought out, but not enough on its own to pull Sam back into things. Down in mana and cards, he was dismayed to see Masashi hit enough mana to play Sundering Titan. That left Black at just one land, though it did cost Masashi a few of his own. When Oiso found a Chalice of the Void he set it at one to lock Sam out, then used Damnation to clear the board and wipe out even more of Sam’s lands as well as creatures, and finally transmuted Tolaria West to find Academy Ruins, threatening “infinite” Sundering Titans. With no outs, Sam conceded.

The second game started out with a back and forth between the two opponents, Black leading with Llanowar Elves and Masashi using Deathmark to kill it. Oiso again used Dimir Signet to accelerate his manabase while Sam played more 1/1s. On four mana a turn early for the second time in the match, Masashi again tapped to make 2BB. Instead of Damnation, however, he had Night of Soul’s Betrayal. Clearly dismayed, Black sat back in his seat, about to lose his team and likely locked out of the game entirely.

After a few moments of thought Black turned to his teammates and proclaimed “I’ve lost,” though he continued playing the match. When Oiso landed a win condition a few turns later, Sam extended his hand in defeat.

“See you in the Top 4,” he offered, prophetically.

A former U.S. National Team captain, Paul Cheon “only” managed to finish third at this year’s competition. His opponent for the round was newcomer Akahiro Takakuwa who had yet to win a team match on the weekend but was being buoyed by strong teammates in Yuuya Watanabe and Masashi Oiso. He spent his early turns developing his manabase with Ancient Tomb and Flagstones of Trokair while Cheon questioned his teammates as to what deck his opponent might be playing. Akahiro’s Monowhite Stax deck sought to control the game with Ghostly Prison and Armageddon to prevent his opponents from attacking, and used Magus of the Tabernacle to wipe out opposing creatures post-Geddon. 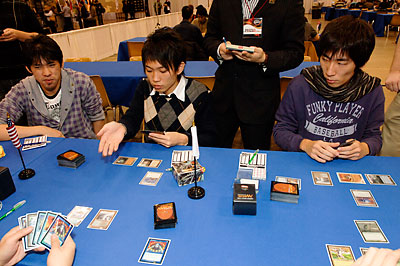 Left to right: Watanabe, Takakuwa , Oiso. Not getting any clues from his teammates, Cheon set about using Wasteland to keep Takakuwa’s mana stunted, still unsure of what his opponent was playing. When Akahiro did manage to build up to four mana and try a Smokestack, Paul was ready with Daze. His opponent tapped out and seemingly helpless, Paul went for his Dreadstill deck’s patented play: Phyrexian Dreadnought with Stifle to keep the 12/12 in play. Akahiro went for Oblivion Ring to deal with the monster, but Paul had Force of Will to counter.

Down but not out, Takakuwa played a Ghostly Prison, his second on the field after resolving one early in the game. Paul dug for an answer with Brainstorm in response, but didn’t come up with one and had to allow the enchantment to resolve. With the coast clear, Akahiro went for Armageddon and it resolved successfully. Unfortunately for him, Paul had been sandbagging a few lands while the Japanese player was left pleading for help from the top of his deck. The first to four mana, Paul was able to attack with his 12/12 and took the first game over two combat steps.

The first play of the game came from Akahiro Takakuwa who opened on City of Traitors and a Chalice of the Void for 1. Cheon didn’t have the Force of Will, and Akahiro looked like he was in good shape with much of his opponent’s deck locked out from playability. The challenge was finding a win condition of some sort, and the two spent the following turns playing draw-go. Cheon was even stunted on mana finding only three lands while Akahiro exploded with a half dozen, some of which produced more than one mana.

When the Japanese team member tried to play Aura of Silence, Paul stopped the game to confer with his teammates. “Is that a problem for me?” He inquired of Sam Black, whose match had finished and who was now bird-dogging for Cheon. Neither player knew the answer, so Cheon opted to counter.

Akahiro then hit a Chalice of the Void for 2, and all of a sudden a huge chunk of Paul’s deck was unplayable. Still, Paul was a pro and wasn’t willing to pack it in just yet. He found a Trinket Mage and played it to search up Engineered Explosives. He then played the Fifth Dawn rare for no mana, allowing him to blow up his opponent’s Chalices the following turn. Akahiro could only watch with a smirk; he held the third Chalice in his hand and could have locked the play out if he had played it for 0 mana the turn before.

Instead Paul blew up the Chalices, dropped Dreadnought with Stifle, and quickly sent the match in favor of the Americans.

American team captain Michael Jacob sat down to square off against reigning (until Sunday afternoon, anyway) Rookie of the Year Yuuya Watanabe. Things appeared to start off well for Michael as his opponent opted to take a mulligan. Yuuya’s Faeries list had served him well on the weekend as he entered the match undefeated in team play, but Mike’s Black-White Tokens deck was the media darling of the weekend and he was no slouch at getting in the red zone. Unfortunately his mulligan fortunes quickly turned as Yuuya’s single mull was met by not one, not two, but three mulligans for the American. 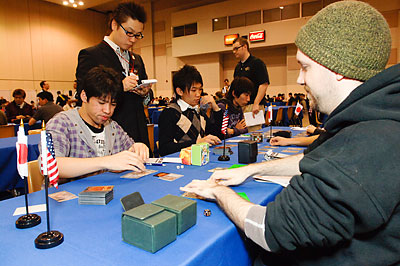 It would all come down to Watanabe and Jacob. On just four cards, Mike fell even further behind as Watanabe used his first-turn Thoughtseize to nail Jacob’s Bitterblossom. Mike struggled to fight back with a Spectral Procession and Glorious Anthem but the tokens had their work cut out for them. Yuuya was quick on the boards with a Scion of Oona and Mistbind Clique. The 4/4 quickly munched Mike’s team with a timely Agony Warp and Jacob’s life total dropped by 5-point chunks. At just 2, Mike played a Cloudgoat Ranger to stabilize. Yuuya nodded, then revealed two copies of Spellstutter Sprite. Mike checked that the extra flyers he couldn’t block would be lethal, and conceded.

The second game started a bit more fairly with neither player on a mulligan. Mike had an early Glorious Anthem and not one but two Marsh Flitters. Watanabe also built up his team using Spellstutter Sprite, Scion of Oona, and Sower of Temptation to keep things balanced. The 2/2 Sower stole a Flitter from his opponent, but with no Goblins to sacrifice, Yuuya was stuck using the pilfered critter as a 1/1 road block.

The Glorious Anthem allowed Mike to start out with the most momentum, but a second Sower and Spellstutter Sprite from his opponent allowed Watanabe to stabilize. Jacob used Windbrisk Heights to play a Terror for free, but his Japanese opponent had the counter and was able to profitably block as a result. The two started a back-and-forth affair in combat, with Mike banking on a double Thoughtseize and Tidehollow Sculler turn to wipe Watanabe’s hand clean. Still, neither had a clear lead and were both looking to the top of their decks for help.

Jacob found a Wispmare that forced him to bin his own Glorious Anthem, but gave him enough attackers to activate a second Windbrisk Heights. The hideaway land revealed a Marsh Flitter, and Yuuya lost two blockers in the form of Mutavault and Spellstutter Sprite while Mike was down a Goblin token and his Tidehollow Sculler. Yuuya’s counter attack with Mistbind Clique dropped Jacob to 2, and when he played a post-combat Faerie Conclave, the second to join his board in the game, teammate Paul Cheon offered a lighthearted “Aw, come on!” to the Fates. When Watanabe attacked with his Clique and both Conclaves the following turn, Jacob was powerless to deal with all the evasion and the Japanese team took the match.