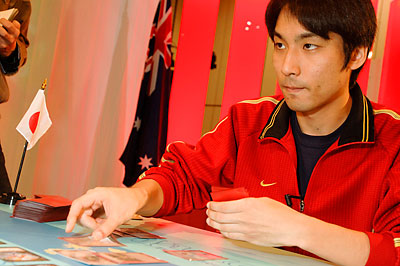 Akira Asahara of Japan, two-time Grand Prix winner. Finland’s Antti Malin isn’t one of the best-known pros, but his resume is solid. He appeared in the Top 8 at Pro Tour–London a couple years ago and has posted a few strong non-Sunday showings. After a dismal 2007, he was in danger of losing his Pro Club invitation coming into that year’s World Championships. In the last round he played Steve Sadin, and the two were going to draw on time. Sadin graciously conceded the match, giving Malin enough pro points to keep his Pro Club level. Fast forward a year and Malin is playing for Sunday glory.

His opponent is Japan’s master deck-builder, Akira Asahara. Asahara has been on the Pro Tour Sunday stage twice before, and has a pair of Grand Prix titles to his name. Surprisingly, Asahara hasn’t brought one of his off-the-radar homebrews to shock the world this weekend. The strength of Faeries was simply too great for him to ignore. In what amounts to netdecking for him, he re-tooled Faeries and swept the Standard portion of Worlds.

Malin is also with Faeries, but he too has a unique take on it. He plays no Scion of Oona, choosing a more pure control build than the traditional gear-shifting Faeries.

Malin shipped back his first hand for a fresh six, but these were no better. If Asahara felt any joy at this, he didn’t show it on his face. Malin was much more expressive, and when his five-card opener enabled back-to-back Bitterblossoms he grinned. Asahara’s concentration deepened.

He had spent his second turn on swinging with Mutavault, and did the same on his third, clearing the way with Peppersmoke on Malin’s token. Malin’s blossoms put him to 13. Malin had a Mutavault of his own and tried to trade on Asahara’s next attack, but Asahara had Peppersmoke to dominate the exchange. Still, Malin was accumulating Faerie Rogue tokens.

Now Asahara’s Mutavault had to stay home. Malin relaxed behind his growing army of Faeries. At the end of Malin’s turn Asahara dropped Spellstutter Sprite into play. He passed without playing and let Malin hit him with four tokens, falling to 12. He played an end-of-turn Scion of Oona, untapped and added Faerie Conclave. His Spellstutter got in for two, knocking Malin to 7, then 5 from the ‘Blossoms.

Asahara stopped him before drawing and played a second Scion, which also entered play without incident. Malin thought hard, counting out scenarios on the table. He eventually decided to send six tokens, losing two of them and putting Asahara to 8. Asahara had Peppersmoke for one of the blockers, clearing the path for lethal damage.

Malin’s last gasp was Cryptic Command on Asahara’s upkeep, but Ashara had a second Spellstutter Sprite in hand to take the game.

The two players went to their sideboards. Asahara took out one copy of Broken Ambitions and his two Sower of Temptation for three Thoughtseize. Malin swapped out three Agony Warp, one Remove Soul and two Vendillion Clique for a package of two Glen Elendra Archmage, two Jace Beleren, one Mind Shatter, and one Sower. 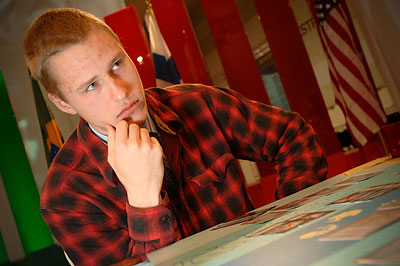 Finland’s Antti Malin, appearing in his second Pro Tour Top 8. Asahara brought his Secluded Glen into play untapped with the help of Mistbind Clique and Thoughtseized Malin. He stripped away one of two Spellstutter Sprites, leaving behind Cryptic Command, two Sunken Ruins, and a Mutavault. Malin untapped and ripped Thoughtseize off the top to return the favor. He saw Asahara had two Cryptic Command, Jace Beleren, Mistbind Clique, and two lands. Naturally, he took Jace.

They played out lands, and Malin added a lonely Spellstutter Sprite. When he hit four mana, he decided to go for Mistbind Clique on Asahara’s upkeep, but Asahara had Agony Warp to effectively kill both creatures. Malin untapped and Thoughtseized again, taking one of the Commands and seeing Terror and Mistbind Clique. He offered the Mutavault to be Terrored, and Asahara accepted.

They began to play draw-go, building piles of lands. Malin broke first with Jace Beleren, leaving four mana up. Asahara considered his options and played Broken Ambitions for 4. Malin happily paid and drew a card. Another Thoughtseize left Asahara with only Mutavault and Clique in hand.

Asahara ripped like the Pro he is, showing Bitterblossom. Malin drew again off Jace, leaving the planeswalker at one loyalty. He summoned Glen Elendra Archmage and turned it back over to Asahara, who passed his turn and dropped Mistbind Clique during Malin’s upkeep. Jace gave them each a card and Malin had an island to go with his Archmage.

Asahara swung at Jace with Mistbind Clique, and the Archmage got in the way. Asahara calmly tapped four and dropped a second Clique during his main phase. Things were looking bad for Malin, but he didn’t seem perturbed. He soon showed why. Jace went up to five loyalty, giving them each a card, then he tapped a ton of mana and obliterated Asahara’s hand with Mind Shatter. His last four mana gave him a Sower of Temptation to steal one of Asahara’s Mistbind Cliques, and suddenly the game was firmly in his favor.

But Asahara wasn’t done peeling winners. This time it was Agony Warp—catching Malin with no untapped mana for his Archmage—killing Sower of Temptation and getting back his Mistbind Clique.

The path was clear for the Clique to knock four counters off Jace. Malin untapped and gave them each a card. Asahara charged again with two Mistbind Cliques and a token, and Malin went for a Clique of his own. Asahara floated four and tapped his lands. The two Cliques crashed, and Ashara tried Clique number three, but Malin had Broken Ambitions to stop it. His deck flashed a Cryptic Command that he was happy to keep.

Jace continued to serve up the hits. This time it was Sower of Temptation, stealing away Asahara’s remaining Clique. By now Malin’s advantage was overwhelming, and Asahara scooped on the following turn. 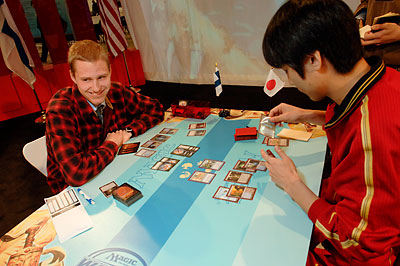 Faeries, Faeries everywhere, so let’s all stop and think. It might have been acting, but Malin indulged himself with a sigh and a frown before keeping his opening hand. He did have a turn-two Bitterblossom, but Ashara had Broken Ambitions. They clashed, and Asahara sent Faerie Conclave to the bottom of his deck. Malin looked at Jace, but sent him away as well, signaling a need for land.

Asahara untapped, played his third land, and hit with Mutavault. Malin failed to find a third land, but he did have a second Bitterblossom. Asahara Repulsed it with Cryptic Command on his turn and gave it back to Malin. Malin Pondered and served himself up a Secluded Glen to get Bitterblossom back into play.

Asahara grimaced, and decided his best plan of attack was Mistbind Clique taking over for Mutavault. Malin was ready with Sower of Temptation. Asahara was short on options. He played out Spellstutter Sprite and cycled Peppersmoke on a token. This got him Bitterblossom, but he was firmly on the back foot.

Malin crashed in for 6, and Mind Shatter took care of the rest of Asahara’s hand. Asahara drew Mutavault and put it into play. Malin locked him up with a second Mistbind Clique, and they were off to Game 4.

Asahara made another correction for Game 4, trading out Peppersmoke for Terror. Malin cut Glen Elendra Archmage and Agony Warp for another Infest and Remove Soul.

They shuffled up and began again. Malin led with Thoughtseize. He stole Bitterblossom from Asahara and left behind two Scion of Oona, Cryptic Command, Spellstutter Sprite, and Swamp. He followed up with Bitterblossom. Asahara’s hand dictated beatdown, and so he played an end-of-turn Spellstutter Sprite and powered it up with Scion of Oona. Malin, stuck on two lands, cut down the Scion with Agony Warp. Asahara played another and swung. Malin fell to 12 after getting his next Faerie Rogue token. 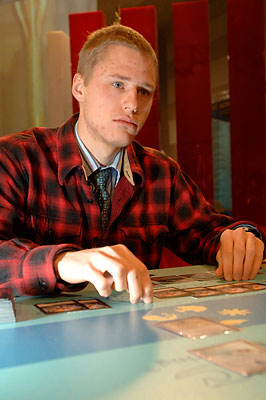 ‘No, Mr. Asahara. I expect you to die.’ His deck decided to cooperate and gave him Sunken Ruins. This let him have Jace and another draw. Asahara played another Mutavault and looked over his options. He was still a blue mana shy of Cryptic Command. He turned on his Mutavault and attacked with it and his Sprite, sending both at Jace. Malin made no blocks and put the planeswalker into his bin. His top card was not a land, and he sat behind his three tokens.

Asahara found an Underground sea and attacked with one Mutavault. Malin took it and fell to 8. He played Spellstutter Sprite at end of turn, untapped, and went to 7. Another Thoughtseize forced Asahara’s Cryptic Command, but Malin was ready with Spellstutter Sprite. Asahara showed he had only Faerie Conclave in hand.

With Malin down to just 5 life, Asahara untapped and sent two Mutavaults and the Sprite at him. Three brave tokens absorbed the hit. Asahara played his Conclave and showed that he’d drawn Thoughtseize.

He didn’t expect Malin to drop his hand so triumphantly: Three Sowers of Temptation. One in the bin meant there were still two too many. The first stole Scion of Oona, and now despite his dwindling life Malin was in a prime position. He hit for 2, then 6 on the following turn. Asahara revealed Mistbind Clique plucked off the top of his deck. It resolved and Malin floated five mana. Was it a bluff?

It wasn’t. Asahara’s Clique stood in front of a token, and they stacked damage. Malin showed a Clique of his own. Now his board advantage was overwhelming. Asahara drew Broken Ambitions and managed to stop the second Sower, but Malin had more than enough creatures to swing for lethal past Asahara’s blockers. Asahara checked the math five times before extending the hand in congratulations. 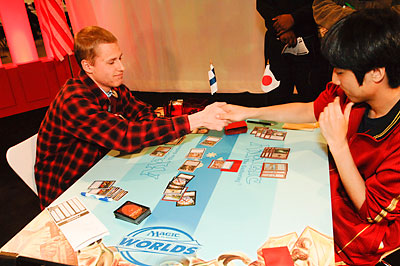 Antti Malin defeats Akira Asahara 3–1 and advances to the Semifinals!