Last year’s World Champ, Israel’s Uri Peleg, hasn’t been keeping a high profile this past season. His only Pro Tour this year was Berlin, and he confesses that he’s been giving Magic a lower priority in his life. He’s shown up this weekend with an exciting Standard take on Extended Elves. His opponent is Grand Prix–Kitakyuushu Champion and 2005 Japan Nationals Semifinalist Junya Iyanaga. A PT regular, Iyanaga has put his trust in Standard’s dominant deck: Faeries. 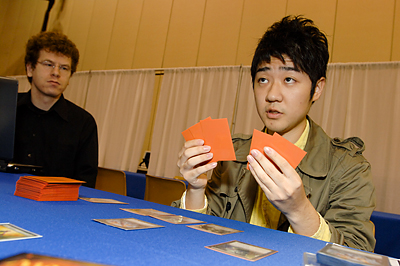 Junya Iyanaga shows off his sleeves.Peleg opened with Brushland and Llanowar Elves. Iyanaga showed Peppersmoke off Secluded Glen and wasted no time dispatching Peleg’s Elf. It was a sucker-punch for Peleg’s one-land hand. With no help waiting on top of his deck, he played Commune with Nature and found himself an Elvish Visionary.

Iyanaga continued his by-the-numbers Faerie game with a turn-two Bitterblossom. Peleg’s tardy second land showed up, enabling the Visionary, but he would need some cooperation from Iyanaga to get off the back foot. Iyanaga played his third land and waited for Peleg’s next move.

Peleg floated two green of Wooded Bastion and offered Heritage Druid. Iyanaga went into the tank and decided to spend his Spellstutter Sprite. Peleg put down a second Llanowar Elves and passed it back. Iyanaga had no fourth land, but Peleg’s progress was so hobbled that Iyanaga could safely play the aggressor. Scion of Oona buffed his airforce and he sent them in for four. Peleg still couldn’t find land and Communed himself more Llanowar Elves. Iyanaga untapped and supersized his team with a second Scion, sending Peleg to his sideboard.

Peleg sideboarded in a package of Gutteral Responses, Cloudthreshers, and Chameleon Colossus. Iyanaga was no less prepared with Flashfreeze, Deathmark, and Infest.

The second game saw Peleg’s deck find its legs. He led with Nettle Sentinel and Devoted Druid, then kicked off the third turn with Thoughtseize. He saw a hand of Flashfreeze, Peppersmoke, two Mistbind Cliques, Cryptic Command, Mutavault and Underground River. He snagged the Flashfreeze but had no immediate followup. 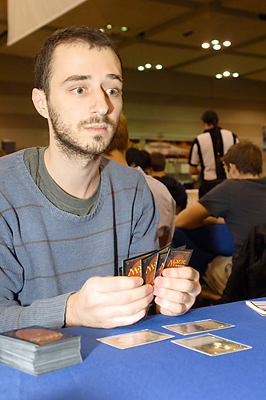 Uri Peleg doesn’t like what he sees. Iyanaga peeled Bitterblossom, turning his Cliques from blanks to live ammo. Peleg did his best to smile and answered with a Chameleon Colossus that really wished it could’ve arrived a turn earlier. Iyanaga surveyed his options. He was at 13 with four mana available, two of it blue. He passed it back to Peleg and dropped Mistbind Clique on Peleg’s upkeep, removing his Bitterblossom. Peleg floated mana and doubled his Colossus, crashing in for eight and leaving Iyanaga at 5.

Iyanaga’s deck coughed up another Underground Sea, putting Cryptic Command back into the equation. He swung in with a token and Mistbind Clique, putting Peleg to 8, then dropped another Clique on Peleg. Peleg thought hard but none of his options were appealing. He half-heartedly evoked Cloudthresher (forgetting to untap his Sentinel) and watched Iyanaga tuck Mutavault underneath it. Mistbind Clique traded with Colossus and left Iyanaga with lethal damage at the ready. Even if the Sentinel had been untapped, the Cryptic Command in Iyanaga’s hand would negate it.

After the match, Peleg admitted that the one deck he didn’t want to face this weekend was Faeries, and especially not one with Peppersmoke. He des-ideboarded and shuffled up his deck to show me how it goldfishes.

It was really something. It can go: third turn, Primal Command your land and tutor up Ranger of Eos. Fourth turn, Ranger for Nettle Sentinel and Heritage Druid. Fifth turn, go nuts. With the tutoring power of Commune with Nature, Primal Command and Ranger of Eos, it’s easy for the deck to draw the works.