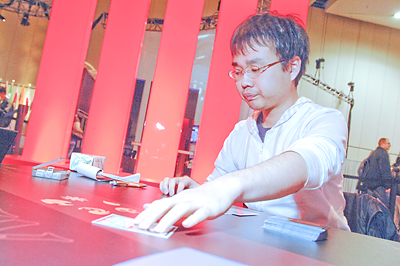 Shingo Kurihara of Japan sends it into the reddest of red zones. Shingou Kurihara is a well respected Japanese pro who had his work cut out for him heading into the tenth round of play, the first with his second draft deck of the weekend. He was staring down French Hall of Famer Raphael Levy, who is always a cutthroat competitor and is having a solid if unspectacular weekend so far.

Kurihara won the die roll after both players agreed to go with the lowest total on the dice, then dropped a first-turn Akrasan Squire. What looked to be a blazing start for the Japanese star quickly petered out, as he played nothing for the following two turns while Levy built up a multicolored mana base. When Shingou did finally make a second play, it was a doozy in the form of Tower Gargoyle. Raph’s first creature, a Death Baron, paled in comparison, and when Shingou’s 4/4 entered the red zone for the first time, Levy fell to just 9 life.

Soul’s Fire from Levy managed to deal with his opponent’s Akrasan Squire, saving him a point of damage each turn, but at 9 he was still in a precarious position. The next attack left him at 5, but Levy had a monstrous bomb to turn things around: Flameblast Dragon! Kurihara paused the game to think. Counting up his mana, he carefully tapped

Akrasan Squire came right out of the gates again for Kurihara in the second game, but Levy had a turn-one play of his own in Deathgreeter. The underwhelming 1/1 was a possible sideboard addition to Levy’s deck, and a smart one against Kurihara’s aggro-Esper build. Levy stayed in lock step with Kurihara, playing Elvish Visionary to match the Japanese player’s second-turn Deft Duelist.

Still, thanks to the bonus from exalted, Levy couldn’t find a profitable way to block and quickly fell behind in the race. When Kurihara played an Esper Battlemage, he threatened to wipe Levy’s board entirely. Raphael was prepared, using a Naturalize to blow up the 2/2 and gaining a life in the process thanks to his Deathgreeter. Still unable to block in a beneficial manner, Levy went on the offensive dealing 2 to his opponent with an attack from both Visionary and Deathgreeter.

Kurihara found a fourth mana, just in time for Tower Gargoyle. The 4/4 sent Raphael Levy into the tank; the last time he had faced the artifact monster the game hadn’t gone well. Either lacking an immediate solution or not willing to play it, Raph spent his turn using Blister Beetle to blow up Shingou’s Akrasan Squire. The Japanese player simply replaced his exalted 1/1 with a second in the form of Dawnray Archer, then bashed Raphael to 10. 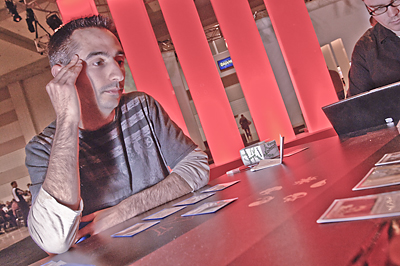 Raphael Levy of France finds his back to a wall. Behind but looking to stabilize, Levy played his Flameblast Dragon. That left him tapped out, however, and he was unable to block Kurihara’s return swing, putting the score at 17-5 in Kurihara’s favor. The Frenchman was able to attack with his 5/5, using its triggered ability to blow up Shingou’s Tower Gargoyle, but Shingou had a Resounding Silence to put an end to the Dragon. When Kurihara followed up with a Tidehollow Sculler, Raphael Levy shook his head, muttering under his breath. The little 2/2 nabbed a mighty Jungle Weaver, and Levy’s prospects looked a bit more meager than they had a moment before. Minus his fatty, the game was turning into a stalemate instead of a blowout in his favor.

Kurihara quickly made matters worse using a Sanctum Gargoyle to get back Tower Gargoyle, and playing a second Dawnray Archer. That meant his 2/3 Sanctum Gargoyle would actually be a 4/5 when attacking alone, and at 6 life Raphael didn’t have long to find a solution. When the top of his deck revealed an Obelisk, Levy found himself down and out of options.

After the match the two players revealed their thoughts on their decks.

“My deck is so-so,” said Kurihara. “My mana base is bad, but my cards are good.”

Levy seemed less enthused, despite having some bombs in his deck. “I’m playing 20 mana sources....” he complained.