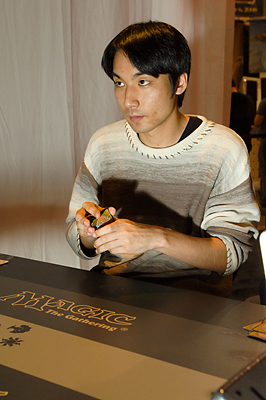 Akira Asahara’s skills are titanic .... Sitting at 9-1, both these competitors, Japan’s Akira Asahara and America’s Ervin Tormos, have good shots at Sunday play so far. Ervin was by far the more talkative of the two. Although he’s usually an amiable guy, it’s safe to say this was a bit of excitement. He told me his goal was to win the whole thing—no retreat, no surrender—and by the way he’d been playing, I could tell.

They both kept their opening seven then passed turn one. A Dragon Fodder from Tormos one turn two was met with nothing but a missed land drop and a discarded Incurable Ogre from Asahara. He then took 2 from the Goblin tokens and visibly winced at Tormos’s Hissing Iguanar. Another Asahara draw step, another nonland. This time a Yoked Plowbeast hit the bin. Five damage and a Fatestitcher from Tormos made the totals 20–13, while Asahara found his second land on his draw step and played a Druid of the Anima, eagerly ready to play mana catch-up.

But it wasn’t meant to be for Akira. A second Iguanar, then an Agony Warp on the Druid was enough. He was ready for Game 2.

Asahara kept his opening again (presumably having more than one land this time) and the two players just played lands for the opening turns. By turn three, Asahara had all three Naya colors and tapped out for a Keeper of Progenitus, answering Tormos’ newly cast Vithian Stinger. Tormos had to stop and read the Keeper, and he considered what Asahara was building towards. Playing Grixis colors, he got very little benefit from that Keeper, just his Mountains which were yet to materialize. Tormos played land four, dropped a Hissing Iguanar and passed. Asahara went into the think tank on his fifth turn, surveyed the Stinger and the Iguanar, then tapped three lands for a Cavern Thoctar, paused and passed it back to the eager Tormos.

That eagerness turned quickly to contemplation, a hand full of gas, and he played his first Mountain and tapped out for a Corpse Connoisseur, entombing Fatestitcher. When Akira signaled for Ervin to take 1, Ervin realized he’d forgotten about the Keeper, and burned for one when his fresh Mountain tapped for two.

Asahara, with all his extra mana, could still only pump the Thocatar four times, as his lands were two Mountains, two Plains, two Forests. He shuffled them among themselves while counting mana out loud. He eventually turned the Thoctar sideways and pumped it twice when Tormos declined to block. Postcombat saw a Drumhunter, netting an extra card for Asahara at end of turn.

Tormos slowly untapped and played Blightning (off only two lands), then unearthed his Fatestitcher to double his Stinger pings, planning to point the 2 damage at the Hunter of Drums. Sadly for Tormos, Asahara responded to the untap ability with a Resounding Thunder on the Stinger, and it went to the ‘yard, its purpose unfulfilled. But a Bone Splinters took out the Thoctar, and after attacks it was 12–7 in Tormos’s favor. With only Hunter and Keeper, Asahara’s board was all but empty. His face was expressionless, staring at the one card left in his hand, hoping to be able to top-deck a solution. Of course, the great player he is, that was all a ruse. He untapped, barely glanced at his new card, and played a Titanic Ultimatum, earning a concession from Tormos—who had seemed in a commanding lead, but had to watch the scores become even at one.

They were both silent now. Playing inside the Grixis match area—surrounded by black columns, playing on a black table, in the shadow of Skeletons and Zombies—has suddenly seemed to take effect on the competitors.

Ervin, playing first, pitched his seven, but kept his six. His early Dragon Fodder and Iguanar were answered by a Knight of the Skyward Eye and Obelisk of Jund. Impressive start for both players. But when Ervin’s second Iguanar was taken out by a Magma Spray, after attacks and blocks took out the first one and Akira’s Knight, only the lonely Goblins remained. Akira and Ervin quickly filled the emptiness with a Druid of the Anima and a Fire-Field Ogre, respectively. And a familiar Cavern Thoctar from Akira soon followed. 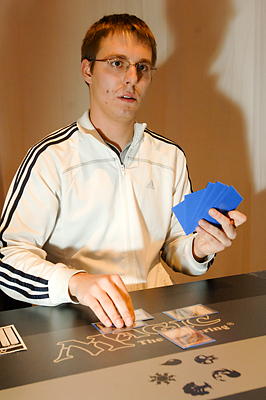 ... but Ervin Tormos is a predator on the prowl. Tormos, unfazed by the 5/5, sent his Fire-Field Ogre into seemingly certain death. Asahara declined blocks as the totals became 20-12. After combat Tormos tapped down for a Fatestitcher. Tormos’s board was clearly more developed, but between an Oblivion Ring on the Ogre, a Cavern Thoctar attack, and a postcombat Woolly Thoctar, the board looked very different when Tormos got back his turn. Sitting on only two Mountains, a wisely used Fatesticher allowed Tormos to cast a Predator Dragon and, knowing he couldn’t kill Asahara in one swing, he swallowed only one token and took Asahara to 6 with 6/6, flying, hasty awesome.

Asahara adjusted his land. They needed to be aligned just right. His hand rested on his chin, lips pursed in thought. Could he answer the Dragon? Did he have the last land and the Ultimatum? No he did not. After about a minute, he realized it was futile. He packed them in and offered Tormos his hand. That makes two matches for Ervin Tormos won by Predator Dragon so far, as he augments his record to 10-1.