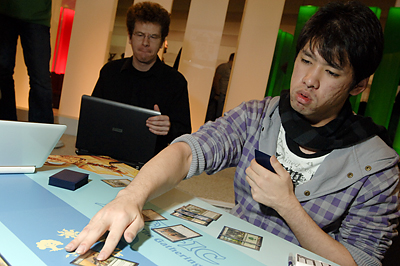 Tsumura started out with an Obelisk of Jund after Watanabe played Cylian Elf and Sighted-Caste Sorcerer for early beats. A fourth-turn Carrion Thrash caused Watanabe to pause and consider his own fourth turn. After reflection, he chose to send in his Elf. Tsumura blocked, drawing out Sigil Blessing and sending the Thrash to the bin. Watanabe played Druid of the Anima and passed it back.

Tsumura had another Thrash at the ready. Welkin Guide sent the Cylian Elf to the air, knocking Tsumura down to 12. He untapped and played a Blood Cultist. Watanabe added Court Archers to his squad, then hit in the air for 4. Tsumura cycled Viscera Dragger at end of turn.

Blightning from Tsumura caught Watanabe with Sigil Blessing and Kiss of the Amesha as his only two cards. He buffed his team in response. Tsumura held him up and thought for a minute. Emerging from the tank, he held off on using his Blood Cultist. He passed the turn back to the empty-handed Watanabe.

Watanabe drew a Plains and swung in the air again, leaving Tsumura at just 4 life. Blood Cultist took care of Druid of the Anima. Tsumura unearthed his Dragger, hit for three, and threw it at the flier with Bone Splinters. Watanabe drew Hindering Light, and now Tsumura was firmly in the driver’s seat. Blood Cultist took care of the Sorcerer, and Minion Reflector hit play.

Now Tsumura started to summon monsters and swing in with their duplicates. Knight of the Skyward Eye from Watanabe was nothing compared to a parade of Undead Leotau, Kathari Screecher, and Dreg Reaver. Soon they were on to Game 2.

Both players sideboarded for the next game. Tsumura brought in Incurable Ogre for Scavenger Drake, and Watanabe ditched Jungle Weaver for Relic of Progenitus. 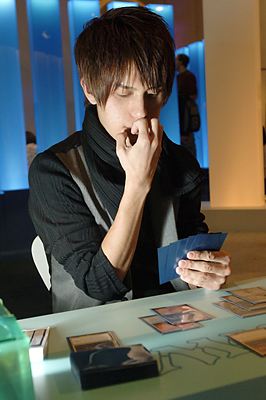 Kenji Tsumura considers his move.Watanabe again had the early beats thanks to Knight of the Skyward Eye and Sighted-Caste Sorcerer. Tsumura threatened the latter with Vithian Stinger. Watanabe drew, then sighed. He had no third land. Tsumura summoned Incurable Ogre and stung the Sorcerer during Watanabe’s upkeep. Watanabe protected it with his lone blue mana, and his deck pranked him by offering Deft Duelist.

Tsumura then tapped five and apologized as he dropped Volcanic Submersion on Watanabe’s lone Plains. Watanabe stuck out his lower lip and nodded. Lands were not forthcoming for Watanabe, and Tsumura only had to make a couple more monsters to wrap up the match.

With six Forests and a Panorama in his deck, Tsumura agreed that he had to keep it: “If he draws one within three turns, his hand is amazing.”