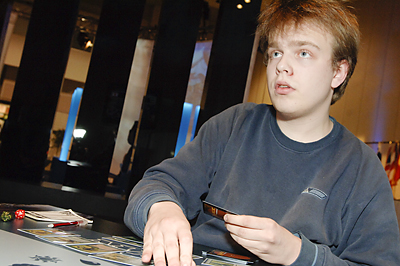 Things are heating up across the board. After two rounds of Team Competition this morning the leaders are bunched together. Japan and Denmark lead with 93 points, chased by the U.S. and South Korea with 90, Malaysia with 88, and South Africa with 87. Captain Hannes Kerem’s Estonian team is mired with a large group of teams in the neighborhood of 80 points. To break out from the pack he’s going to need to continue his already impressive individual run of 10-2.

Standing in his way is Japan’s Captain and Pro Tour icon Masashi Oiso. No stranger to Sunday contention, Oiso is looking to add a Worlds Top 8 to his already impressive resume, with his eyes to becoming the second National Champion (after Jon Finkel) to win that year’s Worlds.

The players shuffled up and checked their openers. Oiso mulliganed, then paged through his six a few times before deciding to keep. He led off with River of Tears and Mutavault, blocking Wirewood Hivemaster with Mana Leak after letting Llanowar Elves into play. He suspended Ancestral Vision and got a breather when Kerem spent his third turn cycling a Horizon Canopy.

The next move was Kerem’s: A Chord of Calling for one. Oiso showed him a second Mana Leak. His Vision wound down to two counters.

Kerem untapped and tried Glimpse of Nature. Oiso had nothing to stop it. He added a second Glimpse, still surprised that he was free to go off, and started churning through his deck. Heritage Druid, Birchlore Rangers, Llanowar Elves, Wirewood Symbiote, another Symbiote. He tried to use his Symbiote to untap the Birchlore, and Oiso spent a Stifle to stop it. He used the other Symbiote to pick up Heritage Druid and get a mana for Essence Warden. Without Nettle Sentinel, Kerem was limited to merely setting up his board and hand, not actually winning. He discarded five lands and gave it back to Oiso.

Oiso gamely put out Sower of Temptation, to steal one of the Symbiotes. Unfortunately for him, Kerem had a third Glimpse in hand, and after Nettle Sentinel and two Hivemasters, Oiso conceded.

Oiso sideboarded in some Threads of Disloyalty and Negates, taking out his near-useless Stifles and some of his more expensive spells. Kerem got rid of his Glimpses, two Pacts and a Dragon for some Viridian Shamans, Mycoloths, and Umezawa’s Jittes. 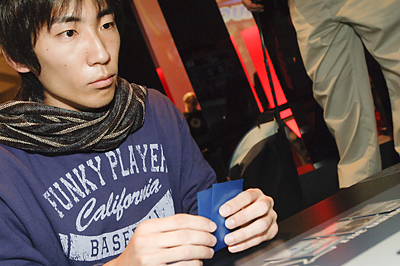 Masashi Oiso accepts the consequences.No mulligan for Oiso this time; his hand was quickly approved and he suspended Ancestral Vision. Kerem came out with Essence Warden and Wirewood Hivemaster. On his third turn, Oiso played and cracked a fetchland for an island, shuffled and presented his deck.

He was stopped by the table judge. He had shuffled his deck only once, and with the cards facing himself, before presenting his opponent with his deck. It was the definition of insufficient randomization. Oiso would be penalized. Oiso frowned and nodded.

The floor rules for such a prestigious event are very clear. Oiso shook his head slowly and scooped up his cards.

After the match Kerem offered heartfelt condolences. Oiso, known for his sensitive nature, nodded quietly before excusing himself.

Oiso managed to shake off the blues before the next round, and he was back in the feature match area, this time against Olivier Ruel.

Asked about his game loss, Oiso was refreshingly frank.

“Playing at the highest level, the rules must be enforced strongly, to keep the game free of cheating. I made a mistake and so must accept the appropriate punishment.”