“You know they call Ognjen “The Onion,” right? He makes his opponents cry.”

I wasn’t quite sure how to take that when I first heard it, but as soon as the die roll started I understood. Asahara managed a measly six while “The Onion” managed a crit with a natural 20. Let the waterworks begin. Asahara had another reason to cry, since his first two hands with his Elves deck provided him little in the way of keepability, and he had to settle for a greatly depleted five-card hand.

Both players leapt out to get their engines online. Asahara got on the board first with a Nettle Sentinel and followed it up with an Elvish Visionary. Cividini got a Magus of the Bazaar which went to work building up his graveyard. The usual suspects hit the bin, and he would have two dredge cards to return on the following turn, as well as a Bridge from Below for when he needed it. Asahara kept trying to dig his way back from the double mulligan, and used a Wirewood Symbiote to return his Elvish Visionary, which he replayed. He had now drawn the two cards he started down.

During his draw step, Cividini returned the first of his dredge cards, a Golgari Grave-Troll, to his hand. That set him up to return two more dredge cards with his Magus, as well as netting him two Narcomoebas. After getting his graveyard in order, he used a Dread Return to get a Mulldrifter back, returning two Grave-Trolls in the process. This got him a whopping six Zombie tokens from his Two Bridges. He now took stock of his massive graveyard, seeing what resources he had available and whether or not he could kill Asahara. He found the second Dread Return and used it to get back a Flame-Kin Zealot, then attacked with six 3/3 hasty Zombie tokens and the Zealot.

Asahara, probably glad to get a chance to actually interact with the game chose to block two Zombies with his Visionary and Nettle Sentinel, the latter of which got to escape to his hand after taking out a Zombie. He took 15 and dropped to 2. Asahara was now almost dead and only had a Symbiote in play. He needed a miracle to survive the next turn. He started with a Wirewood Hivemaster, which was accompanied by an Essence Warden. That made an Insect, which gained him 1 life. The Nettle Sentinel from before returned, and he gained another Insect and another 2 life. That left him with six creatures and 5 life. It looked like he might have enough to make it through the next turn.

Cividini went to his draw and chose to dredge back a Darkblast (surprise, surprise!). He thought for a few minutes before showing the “I guess this seems like a good idea” face and turning his men sideways. He stopped Asahara as he was moving to declare blockers, letting him know that had some plays. Those plays were two Darkblasts aimed straight at the Symbiote and Essence Warden. At this point, Cividini had more than enough creatures to force through the 5 damage, and Asahara packed it in. He had started the game with only five cards and was still able to put up a very good fight against an amazing start from Cividini. Never count the Elves out.

Asahara kept his opening hand, though not without a few moments of deliberation. When it was Cividini’s turn to decide, he let out a long exhale before resting his forehead on his palm. After staring into nothingness for a few seconds, he looked up and chose to keep. 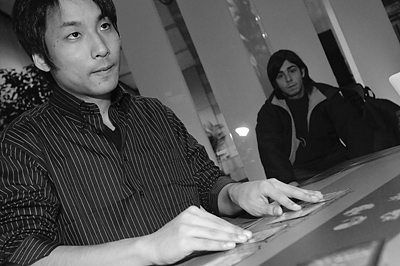 Asahara nettles his opponent.Asahara started with a Nettle Sentinel. Just about any one-drop in the Elves deck is a good start. Cividini had a quick start of his own, though he was playing a different game than Asahara. A Chrome Mox powered out a Glimpse the Unthinkable targeting himself. If I didn’t know he was playing Dredge, the sight of a player electing to mill himself would be a glimpse of the unthinkable. The top sixth of his deck provided him a Narcomoeba and Bridge from Below, as well as a Stinkweed Imp to return later.

Asahara kept his army growing, adding a second Sentinel and a Wirewood Symbiote to his board. Cividini’s second turn saw him return the Stinkweed Imp in his graveyard to his hand during his draw step and promptly put it into play. Asahara, without a third land, found a Wirewood Hivemaster to put into play, but couldn’t get sick with the Symbiote due to lack of a land.

Cividini untapped, dredged up a Golgari Thug (which got him a Narcomoeba), played it and passed the turn. Then Asahara went off. He started with an Essence Warden. Once the life-gainer was in place, he played a Heritage Druid off his last Forest. Now that he had access to mana and two Nettle Sentinels, he started to have some fun. He began by tapping his Nettle Sentinels and the Druid to make mana. He then played a Wirewood Symbiote. This untapped his two Sentinels, which allowed him to return and replay his Heritage Druid twice and replay it to gain some life and make some mans. By the time he passed the turn, he had a ton of Insects and Elves insulating his life total.

On his turn, Cividini dredged back a Golgari Grave-Troll and used a Dread Return to get a Blazing Archon for his team, sacrificing two Narcomoebas and a Thug. Thanks to his two Bridge from Beyonds, Cividini was gifted six Zombies. He also recruited an 8/8 Golgari Grave-Troll. Asahara took his turn to do the same thing he had been doing since the start of the game. He made some mana, played some creatures, got some Insects, and gained some life.

The second Grave-Troll in Cividini’s graveyard made its way to his hand during his next draw step, which got him another Narcomoeba, and Asahara another life point. He now sent his massive Zombie Army into Asahara’s massive Elf and Insect defense force. After a game of Dead Rising, all but one Zombie and Insect returned to the earth. The Elf engine remained completely intact. A second Grave-Troll hit the board, this one a 10/10 to go with his 8/8.

Asahara did some more ridiculous things on his turn, playing the most complicated game of twenty-card monte I’ve ever seen. Simply describing the exact details of his turn would probably take up the rest of the internet, so I’ll just simplify it by saying he made a million mana, played a million guys, gained a million life, and made a million Insects. [Editor’s note: coverage writer may be exaggerating.]

Cividini recruited a third Grave-Troll to his team, but he didn’t have a readily apparent way to even effectively slow Asahara’s growth, let alone get at his enormous life total. Asahara really put his life total out of reach on the next turn with a Mirror Entity. The changeling turned all of his creatures into Elves, including the Symbiotes. That let him return the Symbiotes with themselves to his hand. He could then tap his Nettle Sentinels and Heritage Druid for mana, untapping them when he replayed the Symbiote. With the mana in his pool, he could repeat the process as often as he liked. After he was done, he really did have a million life. In the face of an unwinnable game, and not willing to wait for Asahara to come up with a way to kill him, Cividini decided to try to win a quick Game 3.

Cividini started the last game with a Chrome Mox powered Ideas Unbound. All it put in his graveyard was a Darkblast, but it was a start. All the Dredge deck needs is a foothold. With a dredge card in his graveyard, he was able to Ideas Unbound back first the Darkblast, then a Stinkweed Imp and Golgari Grave-Troll. On the second turn, he had a twenty-card graveyard and a Narcomoeba in play. If he were playing against any deck but Elves, I might almost call shenanigans.

Asahara had made a Nettle Sentinel on the first turn and used it and a Birchlore Rangers to make a Wirewood Symbiote despite only having a Pendelhaven. Cividini still had his Darkblast in hand, and promptly exterminated the Insect. He dredged it back on his turn and used it to off the Birchlore Rangers, as well. He was out of things to do at the moment, and had no cards in hand, but Dredge decks don’t really care about their cards in hand once they get going. He just dredged back a Golgari Thug, which didn’t get him anything useful, played it, and attacked with his Narcomoeba.

Asahara had just been attacking with his Nettle Sentinel each turn. On his next, though, he went off in every sense of the word. He played Summoner’s Pact with only one land in play, for a Birchlore Rangers. That let him get another Nettle Sentinel and a Heritage Druid into play. He played Commune with Nature and started doing what his deck does—drawing cards, generating mana, making creatures, and gaining life. After playing a second Commune with Nature, things just got absurd. At one point, he had all four Nettle Sentinels, a Birchlore Rangers, two Wirewood Hivemasters, Wirewood Symbiote, Heritage Druid, Essence Warden, Llanowar Elves, Elvish Visionary, and seven Insect tokens. Then he played a Mirror Entity. Now, using the same loop as last game, he had access to unlimited life and mana and could draw his whole deck. He had started this turn with a Pendelhaven and a Nettle Sentinel. I was actually speechless. Unfortunately, his massive army had summoning sickness, so he was forced to sink the rest of his mana into the Mirror Entity, attack with his the Nettle Sentinel with which he’d started the turn (which got blocked by the Golgari Thug), and pass to Cividini for one final turn.

This game had been a series of ridiculous swings one way then the other, usually when staring death in the face. When his Golgari Thug went to the graveyard, Cividini got back his Mulldrifter, which he drew and evoked. That let him get dredge two Grave-Trolls, netting himself a Dread Return, two Narcomoebas, and a Bridge from Below to nab a Zombie when Mulldrifter went to the graveyard—everything he needed to get back a Blazing Archon. Now he couldn’t kill Asahara, but Asahara couldn’t kill him. Time had been called during Asahara’s absurd turn, and the players realized the game wasn’t going to end within time.

1 Magus of the Moon

3 Stinkweed Imp 4 Bridge from Below