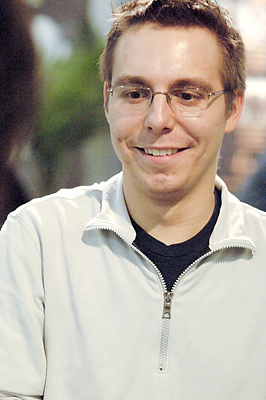 Ervin Tormos comes into this Faeries mirror at 0-2 in Extended. Halfway through Extended, former teammates Marijn Lybaert and Ervin Tormos squared off. They had worked together for Pro Tour–Valencia back in 2007, and when questioned about it, Tormos said, “Well, I said ‘four Tarmogoyfs’ and [Marijn] didn’t listen.” Tormos is usually a good person to listen to, but he was 0-2 in Extended so far; his lack of experience in the format had been an albatross. And now playing the highly technical Faeries mirror match against Belgian expert Marijn Lybaert would prove difficult. Even with so much at stake, the two remained jovial, talking through their long deck check and their shuffling. But they fell silent after a “Good luck” from Lybaert, and put on their game faces.

Lybaert led with a tapped Secluded Glen, while Tormos replied with a Chrome Mox (imprinting Dark Confidant), an Island, and a Bitterblossom. Lybaert answered back with a Confidant of his own, but admitted it was a bit worse than the ‘Blossom; enchantment advantage is key to this match-up. An Umezawa’s Jitte for Tormos pressed further. Lybaert happily traded his Dark Confidant for the first Faerie Rogue token, then used Chrome Mox to power an Engineered Explosives into play with two charge counters, promptly nuking the two-cost Umezawa’s Jitte and Bitterblossom. Moxes and land now played Mexican stand-off. Tormos cast Thrist for Knowledge into three fresh cards (discarding an Engineered Explosives), but was Cliqued (Vendilion style) on his draw step, and he had to share his hand with Lybaert. When two more Bitterblossoms were revealed (along with another Explosives, a Mistbind Clique, and a Smother), Lybaert sighed. The Belgian bottomed the Smother, and Tormos calmly laid his second Faerie-generating enchantment.

Marijn made his own Umezawa’s Jitte and gained two counters from his Vendilion Clique attack. A little math for you: Umezawa’s Jitte + Counters = Bad News, especially for 1/1s of any kind. Ervin answered the equipment the same way his was, with an Explosives set to two. He chose to keep mana up and explode it at his leisure (while conveniently representing a counter). But when Marijn attacked, he popped the artifact and chump-blocked the pumped Clique.

Tormos played a Bitterblossom (#3) and passed looking a little rattled, though he answered Lybaert’s Confidant (#2) with a Smother. The ‘Blossom took Tormos to 4, creating a token, while Lybaert had a comfortable 17. That Clique sure is a fast clock—a ticking and tocking clock. A tick-tock, Clique-clock, if you will.

Tormos upkeeped a Mistbind Clique and championed his Bitterblossom after Lybaert killed his lone token. Perhaps the 4/4 could stave off Lybaert’s active ‘Blossom and tokens. The game’s third Umezawa’s Jitte gave Tormos some much needed counters, while Lybaert traded up the Mistbind with some stray tokens. This play gave Tormos back his Bitterblossom, for better or worse, and Tormos used a precious Umezawa’s Jitte counter to pop an attacking token next turn.

The many faces of Marijn Lybaert.

The potent power in each card, and their wise maximization in using them, allowed the players to pose significant threats without risk to their card count. Both players still had two cards in hand. With the active Umezawa’s Jitte, it appeared Tormos would finally be able to stabilize. Tormos’s Faeries became nothing more than conduits for Umezawa’s Jitte counters, and it worked fine. He’d remove one counter a turn to gain 2 life, while netting two each time a Faerie was chumped. Lybaert played catch-up with a second Bitterblossom. At 11 life with Tormos at 2, Lybaert could afford to take the extra hits for a few turns if it meant stunting Tormos’s Umezawa’s Jitte advantage.

After a few turns of this, Marijn brought his until-now inactive Mutavault to the fray and Ervin promptly popped it with Umezawa’s Jitte. Neither player had attempted to resolve a spell for turns, just jockeying for position as they built their armies and lost life to ‘Blossoms. Lybaert’s Engineered Explosives for 2 broke the spell-casting meniscus layer, then it all went down. Explosives was answered by a Spell Snare that was answered by a Spellstutter Sprite that was answered by another Sprite, but trumped by another Snare. Lybaert’s Explosives and Sprite resolved, and Tormos dejectedly removed a Umezawa’s Jitte counter to gain enough life to survive another upkeep, after which Lybaert blew up the Explosives. Before the Umezawa’s Jitte was destroyed, Tormos removed the remaining five counters to wipe Lybaert’s board.

All that remained was a single Faerie token for Tormos. And when Tormos showed another Umezawa’s Jitte, Lybaert extended his hand.

The players also reflected their sideboards, swapping out Smothers and Confidants for mixed suites of Annuls, Krosan Grips, Negates and Darkblasts.

They shuffled quickly. “I guess a draw isn’t bad,” Lybaert said. They had 15 minutes left in the round, plus their 10-minute extension for the deck check; they needed to hurry. 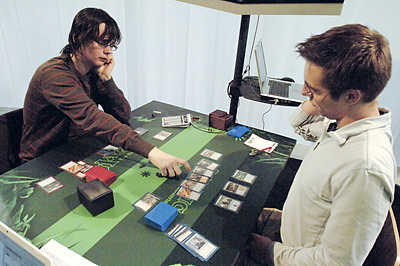 'Hmmm .... That one.' A hand of Engineered Explosives, Thirst for Knowledge, and five lands was good for Marijn. They were good lands. The first spell was an end-of-turn-three Thirst, promptly followed by Bitterblossom for Marijn. Tormos’s own ‘Blossom met Spell Snare, and afterward, he Chrome Moxed a Vendilion Clique to play Thirst for Knowledge. Two Mutavaults for Tormos and one for Lybaert, with Riptide Laboratories on both sides of the field, but only Lybaert had non-mana-producing permanents. After Lybaert Spellstuttered a Vendilion Clique from Tormos, he now had three 1/1 Fliers.

Tormos resolved a key Engineered Explosives that halted Bitterblossom advantage, while Lybaert tied the totals on his attack step, 15-15. Tormos sent his two Mutavaults ramming into one of Lybaert’s and when Lybaert returned his 2/2 land to his hand (via Riptide Lab), Tormos took the opportunity to kill the Spellstutter Sprite and Bitterblossom with his Explosives. After an end-of-turn Thirsting, the faux Factory came back down, and Lybaert attacked into Tormos’s empty board. Then Lybaert put Tormos on the ropes.

Though Ervin played another Explosives for 0, a Vendilion Clique took his Umezawa’s Jitteaway (leaving a Mox and a land). And when Ervin’s own Clique (drawn off the previous one) was Spellstuttered, he was out of gas. With the Sprite trigger on the stack, he tried to bluff by Exploding the tokens, but Marijn calmly activated the Mutavault to create enough Faeries to counter the spell and simply swung in on his next turn. Ervin had to resort to mainphasing Spellstutter Sprite for the chump. It didn’t dissuade Marijn’s team from swinging in and making the totals 12-6.

When Lybaert reused the Clique with the Laboratory, Tormos had seen enough.

Already 3 minutes into their 10-minute extension, the two decided that their best chance was to draw and hope for the best in the coming rounds.