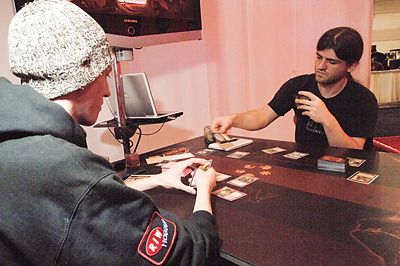 Manuel Bucher and Tyler Mantey keep things cool. Bucher was a little late wandering over to the feature match area. He didn’t realize that he had been called.

“I didn’t realize I could be featured,” he said, dropping his things onto the left side of the table. “What are you playing for?” he asked Mantey.

Mantey mulliganed his first hand and reluctantly kept his second six. “I had the perfect five cards in that first one. I just couldn’t find the lands to finish it out.”

His mulligan was fairly strong, though, and he used a Chrome Mox to get a Bitterblossom into play before Bucher even had any permanents. Bucher had a Mox of his own and used it to make a 1/2 Tarmogoyf.

Mantey set about making up for his lost card with a Thirst for Knowledge during his next turn, trading it and a Chrome Mox for three new cards. While Mantey was tapped out, Bucher went for the big guns, and Mantey could do nothing as Bucher resolved a Gifts Ungiven. The game-changing instant got him a Life from the Loam and a Worm Harvest and sent a Lonely Sandbar and Tranquil Thicket to the bin.

Inside Bucher’s draw step, Mantey used a Vendilion Clique to deny him a Life from the Loam from a hand that had Terror, Smother, Chrome Mox, Worm Harvest, and some land. Bucher wasted no time in Smothering the Clique and using Thoughtseize to strip an Umezawa’s Jitte from Mantey’s grip. Bucher’s Tarmogoyf kept attacking and kept eating tokens at the same rate the Bitterblossom spit them out.

Mantey just drew his card, played a Watery Grave, and passed the turn. Bucher chose to play his Worm Harvest for three tokens. Mantey was at 12 from his lands and Bitterblossom, and these tokens gave Bucher a way around the stream of Faerie tokens. Mantey had a plan for the Worms, but first chose to get some more beats on the table. A Spellstutter Sprite came down at the end of Bucher’s turn, allowing him to get in for the beats. 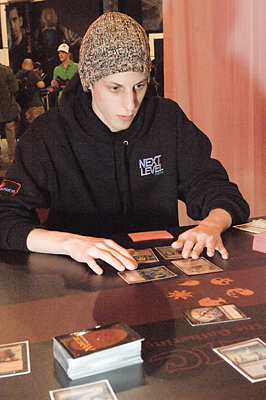 Bucher puts in a token effort. After drawing for his turn, he dropped the bombs—Engineered Explosives that is—into play for zero. With a solution to the Worms at his fingertips, he just attacked and passed the turn. When the Tarmogoyf came over, he blocked with a Faerie token before committing tokencide with his Explosives.

Bucher had something else in store for Mantey. He tapped out to play a Persecute, clearly intending to wipe Mantey’s hand of blue cards. In response to the Persecute, Mantey cleared a Spellstutter Sprite out of his hand. The only card left for it to hit was a Spell Snare, and now Mantey’s hand was empty.

Mantey was starting to whittle away at Bucher’s life total now, and his 2 power worth of fliers was beating the Bitterblossom to the finish line. Unfortunately, Bucher jumped close when he Smothered Mantey’s lone untapped token and attacked him down to 4 with his Tarmogoyf. Things got worse for Mantey, who was falling behind. He kept attacking with his team, but Bucher kept killing them somehow. A Threads of Disloyalty stole a Spellstutter Sprite, which eventually died to a token. With his token gone, he was forced to use a Vendilion Clique, targeting himself, to stave off the Tarmogoyf.

Eventually, Bucher got another Gifts Ungiven, this one getting four removal spells. Mantey gave him a Terror and Smother and stopped the first one with a Spell Snare. Unfortunately, he was just too far behind. He made Bucher actually play the rest of the game, eating one token at a time, until the Bitterblossom killed him.

Mantey mulliganned again for the second game, and his draw wasn’t nearly as explosive this time around. Fortunately for him, neither was Bucher’s. The first real play of the game was a Bitterblossom on turn four, but Bucher had the Spell Snare locked and loaded. Mantey tried another on the following turn, and this one made it through. He attacked with his Mutavault, and Bucher chose not to use his Ghost Quarter on it. Instead, he elected to use the mana to play a Gifts Ungiven while Mantey had only one land untapped. He got Worm Harvest and Barren Moor, and a Tranquil Thicket and Lonely Sandbar went to his graveyard, awaiting a Life from the Loam.

With a few lands in his graveyard now, Bucher untapped and used the Worm Harvest to get four tokens. Mantey untapped, drew his card, and played an Umezawa’s Jitte. Umezawa’s Jitte seems good against a legion of 1/1s. Mantey activated a Mutavault, equipped it, and sent it to die a wiggly death to a couple Worms. Bucher needed to get rid of that Umezawa’s Jitte, and, after using Persecute to clear Mantey’s hand of blue cards, he made an Engineered Explosives for 2.

Mantey wanted it to go down swinging and sent the Umezawa’s Jitte in on a Faerie that I’m pretty sure had hands too small to effectively wield it. Bucher untapped and decided to get rid of the Umezawa’s Jitte and Bitterblossom with his Explosives. Mantey removed the counters, gaining four life and clearing Bucher’s board. Bucher gained some life of his own on his turn, and the Kitchen Finks he played gave him an attacker as well. Mantey continued to trade life for resources, this time in the form of a Dark Confidant. Before he could dispense any secrets, though, he was recruited to Bucher’s side by the Threads of Disloyalty. 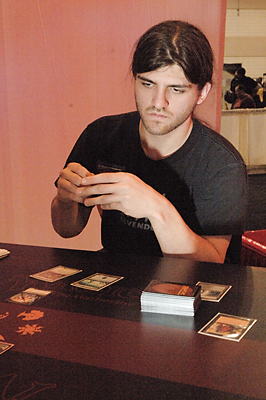 Things look grim for Tyler Mantey. Mantey kept swinging in the face of that insult, and his tokens dropped Bucher to 11. He played a Bitterblossom and passed the turn. Before starting his own, Bucher used his Academy Ruins to return an Engineered Explosives from his graveyard to his library. He drew it with his Dark Confidant and played it next turn for zero. He then attacked with his team, content to trade the Dark Confidant for a Mutavault. The Kitchen Finks got in to even the life totals up. Bucher then blew his Explosives to clear the tokens away before making five of his own with a retraced Worm Harvest.

Mantey was hurting in a bad way now, and he just drew his card and passed the turn. During Bucher’s upkeep, he played a Mistbind Clique, to which Bucher responded with a Gifts Ungiven. That got him a Terror and a Smother and sent Spell Burst and Thirst for Knowledge to the graveyard. Bucher tried to use his new Terror on the Mistbind Clique with the champion trigger on the stack, but Mantey knew what he was doing and countered it with a Spell Snare.

Bucher just drew his card and attacked with his five Worm tokens. One ran right into Mantey’s remaining token, and the Finks died for the first time to the Clique. Mantey again had no play on his turn, content to just let Bucher make the same attack on his next turn. The Clique took out the Finks for the last time, and the Worms dropped Mantey to 2. When Bucher played another Worm Harvest to restock his team, Mantey conceded.