Kenji Tsumura had been in this situation before—one round away from the Top 8 of a major tournament, and losing isn’t an option. Ice water runs in his veins. And yet, as you would expect from Tsumura, he still manages to really enjoy the game and flash a giant smile as he plays with all the pressure in the world on his shoulders.

His opponent this round, Hannes Kerem from Estonia, is just starting to get his fill of the high pressure Magic stage. He’s managed to fight his way to become his National Champion and even gotten himself into a position where he’s almost surely a lock for the Top 8 of his first Worlds. Did I mention he’s a rookie? And not just any rookie, he’s in control of his own destiny in the Rookie of the Year Race. He’s been battling Aaron Nicastri and Tyler Mantey throughout Worlds, but as the only one in the Top 8, he’s put himself in position to possibly come from behind to take the title. 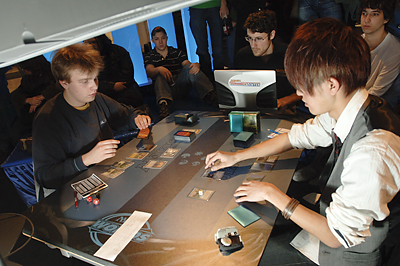 Hannes Kerem and Kenji Tsumura draw a crowd in the feature match area. Kerem led off with a Nettle Sentinel and had an Elvish VisionarySpell Snared before a second hit the table. Kerem’s Nettle Sentinel was getting in for two point chunks until a slight snag hit it. After playing the second Visionary, he failed to untap his Sentinel. Tsumura stopped him when he went to untap it during his untap step—Nettle Sentinels don’t do that. The judge ruled that Kerem had missed his opportunity to untap it, and Kerem could do nothing than sigh and return the Sentinel to the tapped position.

Clearly a little shaken by his misplay, Kerem tried a Glimpse of Nature after drawing his card. Things weren’t getting any better for him, though. Tsumura had a Spellstutter Sprite to put an end to any shenanigans that Kerem might have been trying to start. Without his mini-Recycle on, Kerem chose to pass the turn. Tsumura suspended an Ancestral Visions and passed the turn back to Kerem with a few lands still untapped.

During Kerem’s draw step, Tsumura hit him with a Vendilion Clique. The Clique left a hand that contained a Nettle Sentinel and two Essence Wardens. If Tsumura hadn’t stopped the Glimpse of Nature, things could have gotten out of hand quite quickly. As I’ve come to expect from Tsumura, he took almost no time in making his decision. He’s one of the fastest players I’ve watched, which both serves as a testament to his skill and is nearly impossible to keep right on top of. His pace is so fast that I actually had to switch to shorthand in the middle of his match to avoid falling a game behind.

Kerem just played the three creatures in his hand and just started turning Elves sideways. When in doubt, beat it out. He added a Heritage Druid to his team and let his team rage on. Tsumura activated his Mutavault and thought for a moment before ultimately sticking the Clique in front of a Sentinel and his Mutavault and Sprite in front of the Wardens. Kerem used his Pendelhaven to kill the Mutavault, but Tsumura returned it to his hand with his Riptide Laboratory. His board was almost depleted, and all he could do was replay his Mutavault and pass the turn. Kerem had Tsumura at 4 and just sent his team again to finish him off.

Kerem started off the second game in a hole, but seemed to be alright with his second six. His new hand provided him with a pair of Nettle Sentinels, and though the second got countered by Mana Leak, you can bet he remembered the trigger on the one already in play. 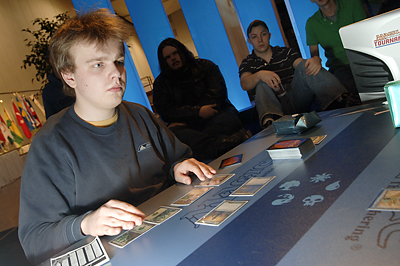 Hannes Kerem has a shot at both the Top 8 and the Rookie of the Year title. Kerem was still sitting on one land. He was forced to play it slow, simply playing one creature a turn. He started with a Heritage Druid, but a Sower of Temptation stole his Nettle Sentinel before he could get his Essence Warden into play. Elves aren’t much for flying, so the Sower had free reign to attack over Kerem’s troops, too.

Kerem found himself a second land, a Pendelhaven, and he used it to make another Essence Warden, which in turn fed the Heritage Druid to make an Elvish Visionary and a Wirewood Symbiote. Tsumura had a Spell Snare for the two-drop, though, and Kerem was left with his three Elves. The Sower kept coming, but the Essence Wardens were largely negating its damage. Tsumura made an investment in his future with an Ancestral Visions.

Kerem decided to send his team and force Tsumura to do some thinking. The stolen Sentinel lined up across from the Symbiote and forced Kerem to save it with a Pendelhaven, and Kerem followed that up with an Essence Warden. Tsumura untapped and made another Sower of Temptation, this time taking the Symbiote, coincidentally enough the only creature Kerem couldn’t return to his hand.

Kerem’s Druid started putting in some overtime now, generating the mana to afford a Wirewood Hivemaster (which got Spell Snared) and a Birchlore Rangers. He sent his Essence Warden and enhanced it with a Pendelhaven. Tsumura just drew and passed. Kerem passed right back and was rewarded with a Vendilion Clique at the end of his turn.

Tsumura was slowly starting to regain the lead. He played another Sower of Temptation, this time coercing an Essence Warden to join his team. He let the Clique and a Sower smash across the empty skies. Kerem decided he could no longer wait for a Glimpse of Nature and dropped his last two Llanowar Elves into play, the second of which drew a Spellstutter Sprite from Tsumura.

The diminutive Japanese player’s even smaller hand grew three sizes during his next upkeep, as an Ancestral Visions made its way to the graveyard. He sent the same squad as last turn but added his new Spellstutter Sprite. The life points were falling off in clumps. Kerem started digging with a Horizon Canopy, but didn’t find anything he really cared for.

At this point, Tsumura could do whatever he wanted. A Riptide Laboratory returned the Vendilion Clique to his hand, and he replayed it to cycle a card in his own hand. The fliers came thundering across to put Kerem in the danger zone. Tsumura backed his game plan up with a Glen Elendra Archmage. Kerem looked like he knew he was out of options. He untapped, drew, and sent his team in what looked like a last-ditch desperation attempt. Before Tsumura blocked, Kerem played Chord of Calling and fetched a juicy concession out of his deck—although since I didn’t see his hand, it’s possible he had actually topdecked it that turn.

Kerem was once again forced to six cards, and he rather quickly and disgustedly added his first hand to his deck. His next six led off with a Llanowar Elves and an Umezawa’s Jitte that could soon take over the game. Tsumura had nothing for his second turn, but after Kerem equipped his Elves and sent them in, Tsumura dropped a Spellstutter Sprite to trade with Kerem’s only creature. Kerem scooped up the Elves and added the counters to his Umezawa’s Jitte. Again, Tsumura just played a Mutavault and suspended an Ancestral Visions before sending the turn back to Kerem.

Kerem found another creature, this time a Birchlore Rangers, to pick the Umezawa’s Jitte up. He got one attack for 5 in with it before Tsumura destroyed it with an Engineered Explosives. He used the remaining charges to gain some life and let Tsumura take over again. And try to take over Tsumura did. He started by trying to take over Kerem’s only creature with a Sower of Temptation, but Kerem used a Chord of Calling to grab a Wirewood Symbiote in response, which he used to return the Rangers to his hand. Tsumura just smiled and suspended an Ancestral Visions. 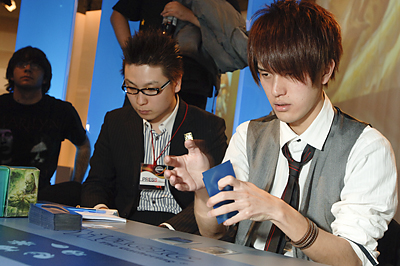 Kenji Tsumura heads to the Top 8. All Kerem had for his turn was Birchlore Rangers, making their encore appearance, and Gaddock Teeg, which seemed a little lackluster under the circumstances. Meanwhile, Tsumura was all pomp and flash. Sower of Temptation came down to break things up and steal away a Symbiote. Gaddock Teeg proved that his true purpose was to feed the hungry Mycoloth, along with Birchlore Rangers. Tsumura did nothing but give Kerem a bit of a sideways pout and a thumbs up.

He got a bit happier, I suppose, when he resolved his Ancestral Visions and then sent his Sowers across for some beatings. The Mycoloth did his thing and coughed out four tokens before beefing his way across the midline. Tsumura just stuck a Symbiote in front of it. Kerem finished his turn by trading his Horizon Canopy for a card and playing a Symbiote of his own. An attempt at a Nettle Sentinel drew a Mana Leak from Tsumura before Kerem said he was done.

Tsumura kept the Symbiotes on one side of the table with a Threads of Disloyalty. Those Symbiotes can never be counted on for too long. After getting four new tokens during his upkeep, Kerem tried to untie the Threads with a little Gleeful Sabotage, but Tsumura simply Negated the attempt. He sent his Mycoloth and his older tokens over to have a chat with his former Symbiote. The Symbiote came alongside the one who had Sown his Temptation as well as a Mutavault. They blocked across the board and, after Kerem used his Pendelhaven to make sure the evil Sower bit it, Tsumura returned his Mutavault to his hand.

During his upkeep, Tsumura got a fresh set of cards as his next Ancestral Visions came off suspend. Once he collected his cards, he returned his Sower of Temptation to his hand and used it to steal Kerem’s Mycoloth. Now devoid of his giant token generator, Kerem was in trouble in a serious way. He tried to dig his way out of the hole he was in with a Horizon Canopy, but he didn’t find anything other than a Heritage Druid. He played it and attacked with his tokens. Tsumura was ready to be separated from his Symbiote and blocked one of the tokens with it. Before damage, though, Kerem had a stake for Tsumura’s heart. A Chord of Calling fetched out an Orzhov Pontiff, pumping his team to kill Tsumura’s. In one swoop, Tsumura was dropped to 4.

Tsumura, not wanting to die, just made his tokens and passed the turn. Kerem tried one last attack with his entire massive team. Tsumura activated both of his Mutavaults and then stuck all of his creatures across from Kerem’s. Only one token was unaccounted for. Tsumura dropped to 3 and almost everything died. Thanks to the Riptide Laboratory, the Sower of Temptation lived to return and steal the Mycoloth once again.

At this point, Kerem had no gas left in the tank and not much left on the board. He knew that his stolen Mycoloth was going to win the game for his opponent in short order and conceded, putting Tsumura into the Top 8.