This match felt a little bit like a changing of the guard. Yuuya Watanabe was last year’s Rookie of the Year and is a member of the Japanese National team this year. He’s a fantastic young player who shows tremendous promise for one so early in his Magic career. By this point, I’m pretty sure every word that can be written about his opponent has been put down. Jelger Wiegersma is quite simply one of the, if not the, most consistent finishers in Magic over the last decade. If there was a tournament being held that didn’t feature Wiegersma in the Top 16, it’s because he wasn’t playing in it. The man is legen—wait for it—dary.

This event marked a special time for Wiegersma. His years of ridiculously great and consistent play haven’t gone unnoticed by his peers, and he was voted into the Magic Pro Tour Hall of Fame class of 2008. Coming fresh off his induction ceremony, Wiegersma was looking pretty fly in a nice pinstripe suit. Barney Stinson would be proud. 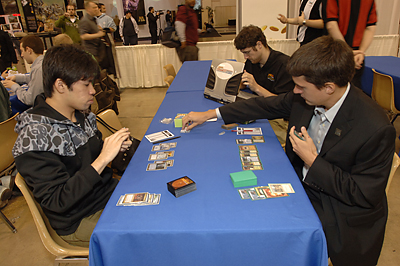 Yuuya Watanabe, last year’s Rookie of the Year, faces off against newly minted Hall of Famer Jelger Wiegersma.Apparently, the gods of Magic care little for extraordinary fashion sense, as Wiegersma lost the die roll and was forced to drop to six cards. Perhaps they just believed that he was so awesome that he should have to start at a disadvantage to give his opponent a chance. His initial hand contained only one land, but his deck provided him with two running off the top to keep him from falling too far behind. He was able to Remove Soul Watanabe’s third-turn Scion of Oona, as well as a Spellstutter Sprite that tried to sneak into play at the end of one of Wiegersma’s turns. Watanabe did manage to find a hole to slip a second Scion into play, though, and the beatdown began.

Wiegersma was just fine with the little Faerie starting to chip away at his life total, though, and just used Watanabe’s turn to draw some cards with Esper Charm. Wiegersma used a Pyroclasm to trade for the pesky flier and left Watanabe with nothing on the board. For a few turns, the players were playing a “fun” game of draw-discard, the newest variant of draw-go, before Wiegersma broke the stalemate with an Esper Charm, forcing Watanabe to discard two cards. Wiegersma’s hand was chock full of pinpoint removal, but nothing to start any offense of his own. Just when it seemed like both players would be creatureless forever, Wiegersma came out with a Mulldrifter. Watanabe had a Cryptic Command for it, and took advantage of the tapped mana on Wiegersma’s side to resolve a Bitterblossom. The enchantment was one of the only threats in Watanabe’s deck that the Remove Souls in Wiegersma’s hand couldn’t handle.

The token it produced swung in on the following turn. Wiegersma had made good use of his draw step, and tried to drop a Cloudthresher into play. Watanabe was ready with another Cryptic Command, though, and Wiegersma was relegated to taking his 1 damage. He tried a similar trick on Watanabe’s next upkeep, after the Bitterblossom had spit out a token. Watanabe was out of Cryptic Commands for the time being, but had a Broken Ambitions for four to try and stop it. Wiegersma had drawn Remove Soul’s counterpart, Negate, and forced the giant Elemental through.

A Thoughtseize from Watanabe stripped a Cruel Ultimatum out of a hand that contained Jund Charm, two Remove Souls, and a Condemn. It also dropped him to 14. A swing from the Thresher halved that total. During Wiegersma’s next turn, Watanabe tried to make a Mistbind Clique, but he knew that Wiegersma was going to Remove its Soul. He was forced to chump with his lone token. The Bitterblossom was reducing the damage he took each turn to 1, but he only had a few turns left before it ate his last point.

Watanabe tried to champion his token after blocking on the following turn, but his Mistbind Clique ate the last Remove Soul from Wiegersma’s hand. Wiegersma added a Kitchen Finks which could get around Watanabe’s one token a turn and get in at his life total. Another Mistbind Clique managed to finally resolve, and put the Bitterblossom in a safer place. Undeterred, Wiegersma knew that at some point, Watanabe would have to deal with his Thresher or block, so he sent the monster in. Watanabe activated his Mutavault and Faerie Conclave and stuck them both in front of the Thresher. One Agony Warp later, and the mess of cards went to their respective graveyards. With that threat dealt with, Watanabe was able to concentrate on Wiegersma’s life. He dropped himself to 2 with another Thoughtseize and stole an Esper Charm over a Cruel Ultimatum, Jund Charm, and Condemn.

Wiegersma kept trying to force through, and sent his Finks in at the Mistbind Clique. When Watanabe was forced to block, Wiegersma used Jund Charm to finish off the Clique, returning the Bitterblossom to play. It would be lethal in two turns, and Watanabe had no way to deal with it.

Watanabe failed to find any early pressure in the first game, which let Wiegersma draw out of a questionable six-card hand and find a way to win the game. Drawing all of his Remove Souls couldn’t have hurt too bad, either. 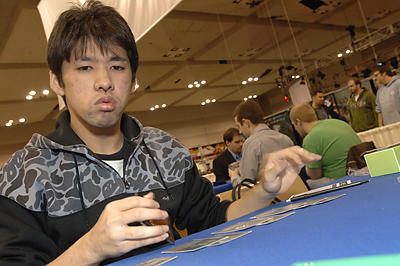 Watanabe started incredibly strongly with a turn-two Bitterblossom followed by Jace Beleren. Jace is really powerful against the control decks, which don’t often have a source of damage to force him off the table until the damage is done. A fourth-turn Mistbind Clique took out a token and provided Watanabe a flier that was going to require a creative solution from Wiegersma. That creative solution involved a few points of damage from combat and an evoked Cloudthresher that cleared the board and sent 2 damage in to finish Jace off. After trading tokens for the Kitchen Finks, the board was more or less at parity.

Watanabe was prepped to break that with a Puppeteer Clique, but card that was destined to have such an incredibly tangible effect on the game was bound to provoke quite the chain of events. Wiegersma tried to Remove its Soul, which Watanabe tried to stop with a Spellstutter Sprite. That was allowed to resolve, but before its ability could do the same, Wiegersma used a Jund Charm to clear the board of everything but the Bitterblossom. That stopped the Stuttering, and sent Puppeteer Clique to the bin.

Wiegersma took advantage of the window to fill his hand up with a Mulldrifter. The last little fight had left him a little depleted, and he needed to make sure he stayed prepared. Unfortunately, that little window was all Watanabe needed. He had a second Puppeteer Clique at the exact right time. The tiny dancers snagged a Cloudthresher, which wiped the board and allowed the Puppeteer Clique to return Wiegersma’s recent Mulldrifter to play, this time providing Watanabe with its services. One massive attack later, and the Five-Man Army (well, it was more of a two-man army) knocked Wiegersma down to 3. He tried to dig a little deeper with Esper Charm, but the Cloudthresher he found him did him less than no good. Watanabe got to experience what every Faeries player wants to at some point: watching the opponent die to the life loss from a Bitterblossom. Justice.

Watanabe’s start that game had been close to ideal. Getting Bitterblossom in play before Wiegersma has a Negate ready will go a long way towards getting a win. Getting a couple activations out of Jace isn’t a bad thing, either. 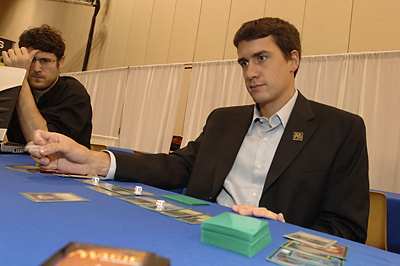 Dice on cards: the secret addiction of the Five-Color Control player.This start was just as good, as a Thoughtseize before Wiegersma got a second land into play stripped him of a Kitchen Finks from a hand that held a Jund Charm and a Remove Soul as other possibilities. Now that he knew the path was clear, Bitterblossom came down for a repeat performance. The tokens spewed forth, and began their mission. A couple turns after Watanabe’s hit, Wiegersma hit one of his own, though he was in a supremely disadvantageous position. Before Wiegersma could get any tokens, Watanabe was able to get an attack in that evened up the life totals. With Wiegersma’s Bitterblossom ticking first, even clearing the board with Jund Charm wouldn’t be enough. He let one more attack get through, dropping him to 8, but was forced to reset things with Jund Charm on the next attack. Watanabe tried to stop him with Cryptic Command, but Wiegersma was prepared with a Negate.

Wiegersma was now barely ahead on tokens, but way behind on life. Watanabe also had a Mutavault and Faerie Conclave that Wiegersma would have liked to get with the Jund Charm. The Mutavault dropped the Dutch Hall of Famer to four. Watanabe drew a Remove Soul and a couple of mana out with a Mistbind Clique on Wiegersma’s upkeep. He was forced to use his tokens to chump the lands on the next attack, which dropped him to 2. His next card wasn’t an answer, or even a Kitchen Finks to stave things off a turn more.