“Do you have dice?” Katsuhiro Mori asked his opponent as they sat down for their Round 3 feature match.

“Um, I have this....” Jon Finkel replied, pushing his iPhone towards the (other) former World Champ. Mori looked at the phone, clearly confused, until Jon pointed out he had an app that could simulate a die roll. Mori won the virtual roll, and the two players got underway. Former World Champion Jon Finkel goes to bat against ....Finkel, the Hall of Famer and Magic poster boy, started slowly with a pair of Vivid lands while Mori wasted no time in playing a second-turn Bitterblossom followed by a Thoughtseize. That revealed Jon to be holding Jund Charm, Cloudthresher, Wrath of God, Rhox War Monk, Mulldrifter, and two lands. It was a monster of a hand against Faeries, but Mori gave no inclination as to whether he was intimidated. Finkel simply said “Yeah” when his opponent forced him to discard the War Monk.

A second, then third Bitterblossom hit play for Mori, but he failed to find a fourth land. Looking to keep things from getting out of control, Finkel used an Esper Charm to kill one of the Bitterblossoms and played a second War Monk. The 3/4 could actually spell trouble for Katsuhiro, who was being shocked each turn as a result of his Blossoms. Finkel opted to hold back an attack, simply passing the turn.

When Mori moved all-in on his attack, Jon was happy to evoke a Cloudthresher. Katsuhiro had a Spellstutter Sprite waiting in the wings, and Jon fell to 13. With the turn back, however, he revealed the Thresher to have been a ruse, main-phasing a Jund Charm to wipe out his opponent’s board anyway. The totals were 15-9 when Jon finished the turn by attacking with Rhox War Monk.

The combination of Bitterblossom and Finkel’s Rhox War Monk were doing a number on Mori’s life total, but he found a stone to kill two birds at once when he used a Mistbind Clique to champion one of the tribal enchantments, then killed War Monk by blocking with his freshly played 4/4. Jon went for a Mulldrifter, but Mori had a Cryptic Command. Mori then revealed a Scion of Oona that allowed his team to get in for lethal out of nowhere. Finkel, who had been sitting on Condemn to nail Mori’s Mistbind Clique, could no longer execute on his plan to survive, and with the tables fatally turned, he conceded.

The two former World Champions shuffled in silence preparing for the second game. Finkel had his work cut out for him, as Five-Color Control is typically a dog to the Faerie hordes, but with rumors that his deck had been created by none other than Mark Herberholz and Gabriel Nassif, you couldn’t count the New Yorker out.

Mori missed having a second-turn Bitterblossom, instead using Broken Ambitions to counter his opponent’s third-turn Rhox War Monk. When the Japanese player followed up with Thoughtseize he saw Bitterblossom, Jund Charm, Cloudthresher, Negate, and Remove Soul staring back at him from Finkel’s hand. The Bitterblossom was certainly a surprise, and Mori opted to force Jon to discard it. Finkel was missing card draw and a fourth land, but he peeled a Fire-Lit Thicket from the top of his deck, then a Mystic Gate, and was right in it.

Mori tried to get an offense going with a single Scion of Oona, but Finkel put an end to those shenanigans with a Cloudthresher. He followed up with Bitterblossom—an embarrassing turn of events for Mori who had no action and was about to get beaten down by the very enchantment he intended to use to beat his opponent! In solid shape, Finkel set his hand down on the table and relaxed while Mori flicked his cards nervously, looking for a game plan. Ultimately he came up with playing a Liliana Vess, which he quickly set to three loyalty in order to tutor.

The crowd expected something big from Mori the following turn, but he simply shipped it back to Jon. Whatever he had Vessed for, he wasn’t going to be playing it on his own turn. Jon moved in to attack, and Mori showed what tricks he was up to, using a Terror to bin the American’s Cloudthresher. Finkel nodded, then played Jund Charm to give a 1/1 Faerie Rogue token, also attacking, +2/+2. Mori tried a Flashfreeze to counter, but Jon calmly revealed Guttural Response and looked to have the game all but locked up.

Maneuvering to stay alive, Katsuhiro Mori made an Agony Warp to fog a Finkel attack, then played a Puppeteer Clique to gain 3 life by stealing a Rhox War Monk from Jon’s graveyard and attacking. The totals stood 16-9 after combat, and Mori went back to his library to tutor with Liliana. Finkel kept on keeping on, attacking all out though sending his two Faeries at Mori’s planeswalker. Katsuhiro blocked the 3/4 War Monk with his Puppeteer Clique, returning Cloudthresher to play as the 3/2 died and persisted back onto the field. That wiped out all the Faeries, including his (now) 2/1 Clique, but the Bitterblossom remained and threatened to continue churning out attackers for Jon.

Mori finally found a Bitterblossom of his own, but used it to enable a Mistbind Clique. In addition, he had also managed to find two Mutavaults, and it looked like the plucky Japanese pro might be able to turn the game around. Finkel had drawn back-to-back blanks in the form of two lands, and Mori revealed a second copy of Mistbind Clique that entered play unimpeded. When Mori attacked with both, Jon was forced to chump with a Bitterblossom token and fell to just 2 life.

Finkel worked on getting things back on track with a second Rhox War Monk and some attacks with the first. The dual 3/4s kept him out of range of his own Bitterblossom, and simultaneously forced Mori to play defense to avoid dying to the Bant offense while also trying to go on the offensive to avoid dying to his own Bitterblossom. Unable to draw anything to punch through, Mori finally succumbed after a marathon second game. 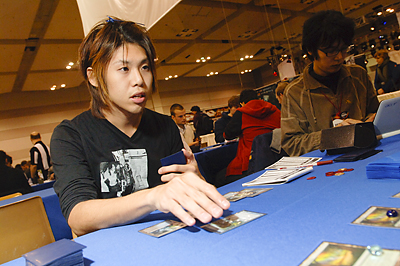 ... Former World Champion Katsuhiro Mori.The third game did not start well for Jon Finkel, who took not one but two mulligans. The players had just eight minutes and some change to finish the match, and played at a blistering pace in an effort to get the match over with. Mori found himself a second-turn Bitterblossom and quickly got on the offensive with Faerie Rogues. Jon meanwhile was stranded on two lands, a Reflecting Pool and Mystic Gate. Had the Gate been any land that could produce black, he would have been able to play a Bitterblossom of his own.

As if on cue, a Vivid Grove appeared from the top of his deck, but Mori had a Spellstutter Sprite to counter Finkel’s attempt at a copy of the tribal enchantment of his own. Jon followed up with an evoked Mulldrifter, finding him two lands, but Mori had a Mistbind Clique in response. The extra 4 points of power were enough to serve lethal damage, and Finkel extended his hand.

When asked after the match whether he felt the matchup was good or bad, Finkel had this to say: “I’m not really sure. I have no idea. I’ve been told it’s bad though.”