The feature match area is certainly impressive. Divided into the five shards of Alara by illuminated columns and stages, the area made an impression on both 3-0 competitors as they walked slowly into Bant. Ruel commented that the white-lighted Bant columns provide the best playing environment, and that he and Damo da Rosa clearly lucked out.

After a long match-up last round against Nassif’s Five-Color control, Damo da Rosa’s Faeries weren’t exactly excited to play against another Five-Color monstrosity. Perhaps he’d be in for another marathon of a round.

Ruel accidentally flashed part of his sideboard; “Oops,” he said. Coincidentally, the only card flipped over was Ranger of Eos, with Ruel’s smug mug in the artwork—I see what’s going on here. Ruel smirked quickly and got to shuffling.

They both commiserated about past matches against one another. Ruel still remembers the “Turn one Stone Rain, Turn two Charbelcher” from so many years ago. But with nary a Chrome Mox in sight, it seemed unlikely these games would end so quickly. 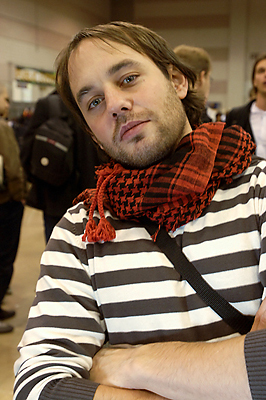 Antoine Ruel brings his Invitational card to the fight.Ruel won the roll and kept a sketchy two-lander (but with multiple Cryptic Commands and a Mulldrifter, it was hard to argue). And after Damo da Rosa announced that he was keeping, Ruel led with a Vivid Marsh. They played Draw-Land-Go, until Ruel ran out of lands on turn three. Then, missing drops four and five, Ruel could only shrug and discard a Liliana Vess on turn four. And on Ruel’s turn-five end step, Damo da Rosa bounced Ruel’s Marsh, making him discard two cards instead of one. Ruel chose two Drifters of the Mulling variety. Though Paulo still had no nonland permanents, just his five lands seemed daunting against Antoine’s one.

Antoine replayed the Vivid Marsh on his next turn, while Paulo end-stepped a Scion of Oona. And within a turn of laying his first creature, all Paulo had to do to earn a concession was attack for 1, and play a Mistbind Clique during Antoine’s upkeep. One look at his draw, and Antoine had seen enough.

Ruel remained jovial, even though he was a game down: “Well, at least you don’t know what I’m playing.”

And he was right. Damo da Rosa oscillated between sideboard choices for a labored two minutes, finally deciding to split his Stillmoon Cavaliers and his Spellstutter Sprites. Ruel took out his Broadmate Dragons and a Pyroclasm for some Cloudthreshers.

Hoping to be luckier this game, Ruel kept another two-land hand—and again with two Commands and a Mulldrifter. They were joined by a Terror and a Plumeveil. Damo da Rosa went to six and promptly trumped Ruel’s Vivid land with a Secluded Glen (revealing a Scion) into Thoughtseize. Damo da Rosa happily took the ‘drifter and passed.

No land for Antoine on turn two, but at least it was a Cloudthresher—a card that would prove valuable in the late-game ... if he could find the land to make such a “late game” possible. While Paulo simply laid a Faerie Conclave.

No land again for Ruel, but a Broken Ambitions for one was able to stop Damo da Rosa’s Stillmoon Cavalier. The clash revealed a Battlefield Forge for Ruel (yay!) and a Flashfreeze, eliciting an “Is that in the format?” from Ruel. 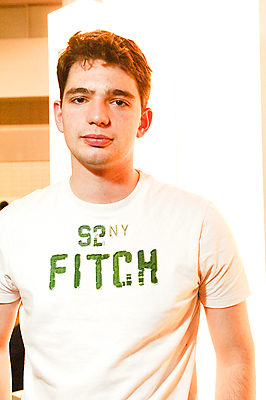 Ruel played the freshly drawn Forge and then shipped. Damo da Rosa’s end-step Scion was Terrored in short order. Just Faerie Conclave attacks from Paulo and another pass of the turn from Antoine. I should’ve started calling him FedEx, he’d been shipping so much. (Sorry folks, they can’t all be winners).

By turn seven, Antoine still hadn’t found land number four, and by then Paulo had resolved a Bitterblossom; this wasn’t looking good. Antoine’s hand was stacked, though, with those Commands still waiting for the mysterious land, destined to appear eventually. And with Paulo light on a clock, he was giving Antoine some much-needed time.

The threat level remained low for Damo da Rosa as Ruel Terrored his Conclave. And he finally found land number four the next turn to main-phase a Plumeveil, while Damo da Rosa had just three land up. But Spellstutter Sprite only costs two. And with one Faerie token and one Bitterblossom, three faeries was sufficient to counter the 4/4 blocking machine. After a Fae attack, Damo da Rosa resolved a Mistbind Clique on Ruel’s next upkeep. And though the life totals were 16-16, Ruel’s draw step, again, initiated a scoop sequence.

It looks like this matchup resembled “Stone Rain, Charbelcher” much more than I’d expected.