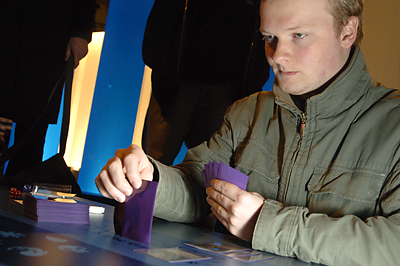 Human computer Frank Karsten calculates the perfect play.Shuhei Nakamura and Frank Karsten sat down to the final round of individual play on Thursday in solid but not spectacular position. Shuhei, looking dapper in a suit and tie in honor of the Hall of Fame and flag ceremonies held earlier in the day, is the leading contender for the Player of the Year title. He is facing some stiff challenges to the trophy, however, and will need to post a solid finish to guarantee the award.

Across the table his opponent Karsten shuffled up his Faeries deck. Frank—long known as a bit of a monster for detail as well as a road warrior who once played through a Pro Tour despite being physically ill—has outdone himself for the Standard portion of Worlds. Unhappy with his testing, he had taken the results from nearly a hundred Standard events to determine what deck was the most successful. When the survey said it was Faeries, he then took each individual list and aggregated them to determine what the correct proportions of each card should be in his build. That led to some interesting numbers, like one main-deck Ponder, but Frank is well respected within the professional community, and it will be interesting to see if his gamble pays off.

After losing the roll, Karsten was uncertain whether he should mulligan. “Even I keep, odd I mulligan,” he said, rolling a six-sided die. When it came up odd, he shipped his hand back. Content with six, the two got under with with Nakamura opening on a Mutavault and Island before playing Jace Beleren. The Japanese player was going to need a solid start if he wanted to beat Frank’s second-turn Bitterblossom (which made his mulligan look ingenious).

The Dutch player managed to deal with Shuhei’s planeswalker by way of the combat step, and Nakamura could only watch helplessly as his opponent had back-to-back counters for Shuhei’s Sowers of Temptation. Behind on the board and in the life count, the player from Japan needed to get something started while Frank’s gradually accumulating army allowed him to sit back and play control in an attempt to disrupt Shuhei’s efforts.

Frank didn’t sit back, however, playing a Jace of his own and using it to find a fifth land. He decided to keep his entire team home to protect the planeswalker and, sensing an opportunity, Nakamura happily sent two copies of Mutavault in to wipe Frank’s team, but left Jace undisturbed. The Bitterblossom Frank had played on the second turn continued churning out Faerie Rogues, and his army quickly re-filled the battlefield. Shuhei was still struggling to put up a fight, and when Karsten played a Vendilion Clique for which Shuhei had no answer, Nakamura opted to concede rather than show Frank what he had left in his hand.

Shuhei smiled at his opening hand before sending it back. It had contained all of his Cryptic Commands but none of his lands. Across the table Frank teasingly rolled another die, perhaps indicating he intended to mulligan or perhaps a good natured ruse.

For the second game in a row, Karsten had a second-turn Bitterblossom, but this time Shuhei was prepared. He used Broken Ambitions to counter the tribal enchantment, then made a third-turn Jace Beleren. Karsten’s second Bitterblossom, played on his third turn, resolved. Shuhei answered with a Sower of Temptation that had no legal targets to steal.

Karsten took 3 damage by tapping Underground River to Thoughtseize his opponent. The sorcery revealed Shuhei’s hand of two Spellstutter Sprites, a second Sower of Temptation, and a Thoughtseize of his own. Frank forced the Thoughtseize to the graveyard, then passed the turn without attacking.

Nakamura moved his Jace from one loyalty to three by having both players draw a card, but passed the turn without playing a spell or a land. When his Dutch opponent tried to play a Jace of his own, Nakamura opted for Cryptic Command, set to counter Jace Beleren and bounce Bitterblossom. The wily Karsten had a Spellstutter Sprite to counter back, sending both Jaces to the graveyard—but that let Shuhei resolve a surprise Mistbind Clique the following turn. With the score at 20-11 in Shuhei’s favor, Karsten needed to get a plan of action in place or his Biterblossom would serve as Shuhei’s win condition.

In that vein, Karsten decided to play a Fathom Trawl netting himself three action cards, but was still on the defensive and forced to chump Shuhei’s attack with Mistbind the following turn. To make matters worse, Nakamura had also played a Sower of Temptation to steal one of Karsten’s Faerie Rogues! When Shuhei tried to play a second copy of the larceny-prone 2/2, a counter war ensued, with Frank coming out on top and adding a Spellstutter Sprite to his army. 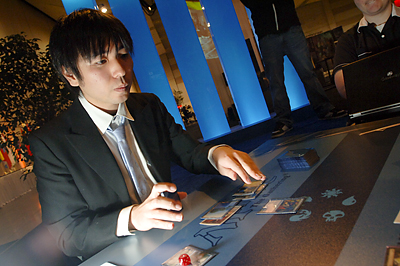 Shuhei Nakamura, seen here during his Blue Period.As the two players jostled for position, creature-lands started to look increasingly important. Shuhei had amassed a Faerie Conclave and two copies of Mutavault while Frank had a triple set of ‘Vaults himself. He had also managed to land a Scion of Oona, but continued to be forced into chump-blocking his opponent’s Mistbind Clique each turn. He couldn’t afford to allow the 4/4 to die as it had championed a Sower of Temptation upon entering play, and having the 2/2 return would mean losing his Scion of Oona, to his opponent’s gain.

Falling to just 4 life, Frank used Thoughtseize to clear his opponent’s hand of a Spellstutter Sprite, then played Vendilion Cliqued and targeted himself. Shuhei, who had resolved a Bitterblossom one turn prior, didn’t seem concerned and went about his own turn, putting a Faerie Rogue into play before trying a Jace Beleren (countered by Frank) and passing the turn. Frank decided to go for it. Using a Cryptic Command, he tapped Shuhei’s team down and bounced Faerie Conclave, leaving Nakamura with just a pair of Mutavaults to block. Turning his entire team sideways, including three active Mutavaults, Karsten looked to be swinging for lethal. Counting up the total power of the opposing army, Shuhei smiled and nodded.

“Wow, I actually thought you were going to lose that!” said a fan to Frank from the crowd.

“Did you catch that part about the die rolling?” Frank asked after finishing the match. “I got it from a book called The Dice Man by Luke Rhinehart. It’s about a guy who makes all his decisions in life by rolling a die. I found that inspiring, so now I’m trying to do it more.”