From a coverage perspective, one of the most intriguing things about Worlds is the situations that can arise due to the multi-format nature. In a single format tournament, you only get one chance to see a particular pair of players square off on the field of battle. It’s very much like the essence of a duel—ten paces, turn, shoot, no rematches. Here at Worlds, though, the multi-format nature allows for a pair of players to potentially square off multiple times over the course of play. “Sure, you beat me with pistols. Let’s try swords this time.”

In the first round of team play, with their respective teams one and two on the standings and undefeated themselves, Aaron Nicastri and Masashi Oiso brought their Extended decks to bear and fired. The end result was two bullets fired, but no casualties. The match ended in a draw. Today, they get to test their skills against each other in another format: Shards of Alara Booster Draft. As seems to be the theme for these two, their decks show a bit of similarity. They both have a solid red-green base, with Nicastri deciding to take the venture into Naya where Oiso, who also had the opportunity, had passed. 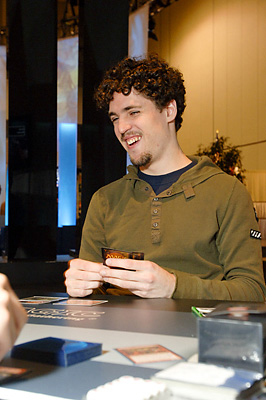 Aaron Nicastri serves with a smile. Nicastri won the die roll and elected to keep his hand. Oiso looked at his opening seven and grimaced before sending them back for six with a sigh. After a few seconds of quiet contemplation, during which he didn’t seem too impressed, he chose to stick with his second six. Neither player did anything for the first couple of turns other than play lands. Nicastri made up for lost time with a third-turn Wooly Thoctar off a Plains, Forest, and Mountain. Oiso had nothing to match it. On the next turn, Nicastri played a Hissing Iguanar before sending the Thoctar into the red zone.

“I’ve a little more,” Nicastri added after combat, as he played and tapped a Forest to make a 3/3 Wild Nacatl. The first bullet had hit Oiso, and Nicastri didn’t need another to score his first win.

Nicastri was a little zealous in his shuffling, and as he piled his cards in front of him, a Necrogenesis flew like a rocket across the table and landed face-up next to Oiso. He recoiled with a smile and used his free hand to shield his eyes from the card as I picked it up and returned it to Nicastri.

“And that was my tech, too,” Nicastri laughed as he dropped it on to one of his piles.

Oiso was the early aggressor in the second game, and his Elvish Visionary got in for 2 on the third turn—that is, until Oiso pointed at Nicastri’s life total and reminded him that the Visionary is only a 1/1.

“I didn’t think he was that good,” Nicastri conceded as he adjusted his life total.

Oiso added a Vithian Stinger to his team, but Nicastri had a Magma Spray for it.

“I don’t like that guy,” Nicastri joked through pursed lips.

Apparently, Oiso wasn’t a fan of Nicastri’s Jund Battlemage as well, and he used his own Magma Spray to remove it almost as soon as it left Nicastri’s hand. With the board sitting clear, Oiso was given a Gift of the Gargantuan, and the Rip-Clan Crasher and Forest he received fell into play in the tapped position. This was Oiso’s first salvo of any real value, and Nicastri dropped to 15.

Nicastri was able to reload with a Jund Battlemage that promised to provide a never-ending string of creatures to trade for Oiso’s. Oiso had no bullets for this one, and was relegated to simply playing a second Gift of the Gargantuan. He chuckled a bit as he revealed another Forest / Rip-Clan Crasher combination, getting a “Lols” from Nicastri, and dropped the pair into play just as he had on the previous turn. The attack dropped Nicastri to 10.

Contributing to Nicastri’s deficit was his inability to find a fourth land. He had (unfortunately) managed to reach a position where he had nothing better to play than the Obelisk of Jund in his hand. He now had a fourth source of mana, but couldn’t have been happy at having to waste an entire turn getting it. Oiso took advantage of the fact that Nicastri needed his Jund Battlemage to survive and sent his two Rip-Clan Crashers to, well, crash into Nicastri. Nicastri reluctantly took the damage and dropped to 6. After combat, Oiso upgraded his Elvish Visionary and one of his Crashers into a 6/6 Thorn-Thrash Viashino.

Nicastri made sure he had 6 power of creatures on his turn by using his Jund Battlemage to make a token at the end of Oiso’s turn and then recruiting a Hissing Iguanar to his team. When the Viashino came thundering across, Nicastri lined all six power of his creatures up in front of the scaly attacker. All it took was a Branching Bolt removing the Iguanar from the equation for Nicastri to concede. Despite drawing first blood, Nicastri now found himself in the unenviable position of eating the second bullet of the match. There was one left, and the chamber was spinning. 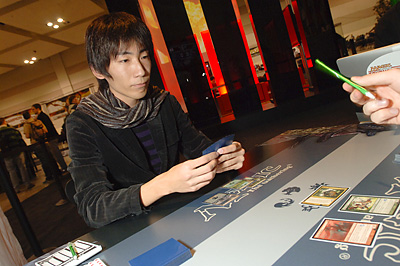 Masashi Oiso. “There must be better creatures in your deck if you’re playing double gifts,” Nicastri ventured. All he got from Oiso was a shrug and a grin. While this may have been true, all Oiso needed to win the last game was the pair of Rip-Clan Crashers he was gifted. After their performance, I can only guess that those 2/2s aren’t getting regifted by Oiso this Christmas season.

A Crumbling Necropolis from Nicastri fed a second-turn Rip-Clan Crashers, which ran into Oiso’s own Crashers after getting a single shot off. The next turns were a flurry of removal. Nicastri had double Jund Battlemage yet again, but this time, Oiso had a Branching Bolt and a Magma Spray to deal with them. Oiso was working with his own pair of threats, and over the next couple of turns built up a duo of Carrion Thrashes, which he showed no worry of attacking into Nicastri’s freshly played Jungle Weaver. Nicastri was wary of a trick and chose to take the 8 damage. Oiso simply marked the change and played an Elvish Visionary, which would no doubt serve as food for some larger creature in a turn to come.

Nicastri was down to 8, and hiding behind a lone Jungle Weaver before Oiso removed it with a Bone Splinters. The Visionary had served its purpose. He was leery of a cycled Resounding Silence, though, and passed the turn without attacking. Nicastri took advantage of the change in priority to cycle a Resounding Thunder at one of the Carrion Thrashes. Oiso paid his two and returned the already useful Visionary to his hand.

After cutting down some of Oiso’s offensive options, Nicastri added a Cylian Elf and the powerful Spearbreaker Behemoth to his team. He was pretty low, though, and it appeared that the Behemoth would be relegated to being an indestructible blocker. Over the next two turns, Nicastri made himself a Mosstodon, Jungle Weaver, and the Elvish Visionary. Nicastri had just played a land and said go. With his forces now assembled, Oiso was ready to send the team in. A Branching Bolt removed the Cylian Elf from play, which left Nicastri with a very lonely Spearbreaker Behemoth. Facing lethal damage, Nicastri simply laid his lone remaining card on the table, a Forest, and shook Oiso’s hand.

“Just too many lands,” Nicastri lamented as he slowly collected the cards that had failed him.

“I think my deck may be a little better than Oiso’s, at least a little more powerful.” Nicastri’s deck was chock full of powerful cards, with Flameblast Dragon, Skullmulcher, and Spearbreaker Behemoth just to name a few. Oiso’s deck, which was fairly powerful in its own right, relies more on powerful interactions than individual cards, as he tried to feed his many devour creatures and use cards like Carrion Thrash to force difficult decisions on the part of his opponent.

Complementing these synergies were a handful of good removal spells that kept him from getting too far behind while he got things set up, as well as a few early, aggressive creatures to attempt to get his opponent into a more defensive position early. They came together very well for him against Nicastri, as he was able to actively prevent Nicastri from getting anything to stick as he assembled his team. “If he hadn’t had removal for those two Battlemages, I would have been able to get something on the board, which would have let my Behemoth do something other than just block.”

”Carrion Thrash is just one of those cards that make things awkward. I was actually kind of surprised by the creature he got back with it. I was expecting him to get back the Crasher and go with the beatdown.” We then talked for a little bit about the Elvish Visionary‘s virtues. It’s a really good card that found a fantastic home amidst all the synergistic combinations in Oiso’s deck. It draws a card and can be used to feed a devour creature or even a Bone Splinters. “I wish I had a couple of them in my deck. It’s really good in this type of deck as well, since it would help me draw into my bombs and also buy me a little more time to get them into play.”

“I wish I had switched into Naya earlier. I was fortunate enough to get three Jund Battlemages and a Wooly Thoctar as my first four picks in the third pack, as well as another Wooly Thoctar later that pack.”

The Naya cards were definitely there late in the first pack, and he left himself a few outs early in the draft in case he decided to make the switch. An early second-pack Wild Nacatl and Ranger of Eos signaled that he might be willing to consider the shift. He did say that he wished he had been able to pick up a Naya Panorama or two. He was pushing his mana fairly hard with the addition of the second splash color, and he had to rely heavily on basic lands for his splash since he only had a Bant Panorama, Obelisk of Jund, and Crumbling Necropolis to help fix his splashes.

All in all, Nicastri’s deck seems very consistent and powerful, two qualities you want in a deck you are trying to run a pod with. He ran into a roadblock in Oiso, but his deck seems quite good and should be able to salvage a 2-1 from this pod. Oiso’s deck is also quite good, and, if it performs as it did against Nicastri, he should have no problem 3-0ing the pod.

1 Bone Splinters 2 Gift of the Gargantuan