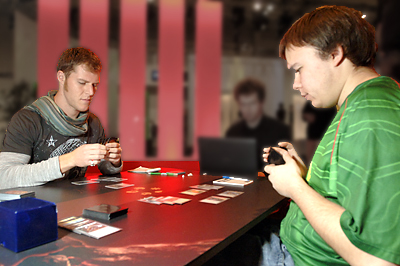 Hall of Famer Ben Rubin faces Gaudenis Vidugiris. Gaudenis Vidugiris may live in America, but this weekend he’s fighting on behalf of Lithuania. When his bid to make the U.S. National Team failed, he took advantage of his dual citizenship to fly to Lithuania and compete in their Nationals, earning himself a spot on their team.

Across from Vidugiris sat newly minted Hall of Famer Ben Rubin, wearing meticulously torn jeans and a mirror ball / wolf-themed T-shirt on top of long sleeves, accented with a very fashionable scarf (perhaps properly called a neck wrap). Vidugiris came into this round at 5-2, and Rubin was sporting one of his trademark draws at 4-2-1.

Rubin started the match with a mulligan, and then stumbled on his mana on turn three with a late Crumbling Necropolis. His Rockslide Elemental had to wait a turn to hit play. Luckily for him, Vidugiris was keeping things slow. His first play was an Obelisk of Esper on his fourth turn.

Rubin didn’t have a fourth land, but he did have Puppet Conjurer. Agony Warp took care of the Rockslide Elemental before it could start growing. Vidugiris untapped and dropped Tower Gargoyle. Rubin also had removal at the ready in Bone Splinters, sacrificing a poor, defenseless Homunculus. Fleshbag Marauder caught the now-unprotected Conjurer, and Vidugiris brought Metallurgeon into play.

Finally Rubin found land number four and summoned Vithian Stinger. Vidugiris’s deck seemed to have hit its stride. He spilled Esper Battlemage and Tidehollow Strix onto the field. Rubin had an Agony Warp of his own to bury the Battlemage before it could get up to any mischief. Between Vidugiris’s upkeep and his own turn he was able to kill the regenerated Strix, but he had nothing to add to the board.

Vidugiris still wasn’t out of gas. This time it was Windwright Mage, who started to siphon off Rubin’s life points. Rubin had nothing but an Obelisk of Grixis to contribute. Vidugiris refilled with Kish of the Amesha, his life total soaring to a comfortable 30. Rubin entombed another Stinger with Corpse Connoisseur, but despite a handful of cards, refused to play more. 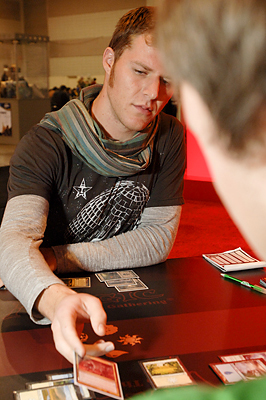 Ben Rubin and his scarf make a play. Vidugiris continued his slow assault with Windwright Mage, adding Deft Duelist to his team. He tried a Sanctum Gargoyle but only succeeded in drawing out Cancel. Finally Rubin was spurred to action. He hit for 3 with his Connoisseur and added Kederekt Creeper to his side of the board. Vidugiris had Rubin down to 10, but he frowned in concentration. Rubin, every move methodical, hit for another 3 and added another Creeper and a Blood Cultist.

Another Esper Battlemage hit play for Vidugiris as he knocked Rubin to 8. Rubin’s return volley was a backbreaker: Cruel Ultimatum. Vidugiris had three cards in hand and rather than waste it, spent Agony Warp on the Blood Cultist, taking the power off Corpse Connoisseur. He lost Bone Splinters and Fleshbag Marauder from hand and sacrificed Deft Duelist. Rubin got back his Cultist and drew three. It was as disgusting as advertised. His Kederekt Creepers swung in for 4.

Vidugiris fought on gamely, killing the Stinger with his Battlemage and continuing the aerial attack. The life totals were 18 to 13 in his favor. Rubin hit with his team. The Metallurgeon absorbed a hit from the Corpse, but now Rubin was clear to unearth both his Stingers to kill off the Windwright Mage. Worse, he had Cancel for Vidugiris’s Sanctum Gargoyle. Two more attacks sealed the deal.

Things looked bad for Vidugiris when he stopped playing cards after a Plains and Swamp. Rubin had all his colors and opened with Tidehollow Strix and Executioner’s Capsule. Vidugiris’s second Swamp showed up only a turn late, and Fleshbag Marauder ate the Strix. Rubin played Vithian Stinger and passed it back.

Vidugiris knocked the top of his deck hard, and it smartened up in a big way. It served up island, putting Tower Gargoyle onto the field. Rubin returned fire with the Rockslide Elemental, Puppet Conjurer combo. Vidugiris swung overhead for 4 and made a Deft Duelist, and after Rubin showed Fire-Field Ogre, again derailed the combo with Agony Warp on the Elemental.

Tower Gargoyle continued to hit. Rubin’s Ogre traded with the Duelist, but his second Stinger didn’t have an appreciable effect on the board. Another hit, and Rubin was down to 8. Another Duelist hit play. Finally Rubin showed Agony Warp to put down the Gargoyle with a Stinger’s help. Vidugiris had a crippling rejoinder: Sharuum the Hegemon, resurrecting Tower Gargoyle.

“That guy’s black, huh? Oh well,” said Rubin as he scooped up his cards. 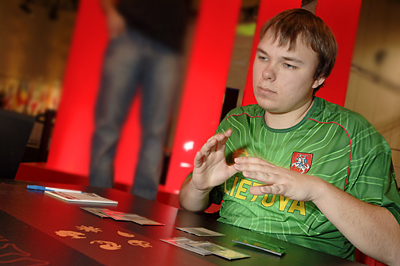 Gaudenis Vidugiris, United States resident and member of Team Lithuania.Rubin went to his board before Game 3, getting out another Cancel. He stymied Vidugiris’s second-turn Duelist with a Kederekt Creeper, then held back on four land after Vidugiris got himself an Obelisk of Esper. Looking at his four mana, Vidugiris cast Courier’s Capsule, but Rubin was ready with Cancel. He frowned on his turn, with no fourth land, and played Dregscape Zombie.

Rubin continued to build with Obelisk of Grixis and Vithian Stinger. Vidugiris got back his Capsule with Sanctum Gargoyle. Rubin made Tidehollow Strix and sent Dregscape Zombie to the bin. Vidugiris hit for two in the air and played out his Capsule and a Windwright Mage. Rubin was having none of that, and offed it with Magma Spray, sending his two creatures and putting Vidugiris to 16.

Vidugiris returned fire for 4 and played Kathari Screecher. Rubin untapped, pinged it with his Stinger, then used it to Bone Splinters away the Gargoyle. The Stinger unearthed for another round to deal the second point to the Screecher, and Vidugiris’s air force lay in ruins. On his turn he could only add Metallurgeon.

Rubin smashed in for 6 and Canceled an attempted Battlemage. Another attack forced Metallurgeon and Deft Duelist to team up to take down a Creeper, but Vidugiris was knocked too low. In another strike the match was over.

After the match, fellow fashionisto Katsuhiro Mori pointed out that Rubin had missed a point with his Vithian Stinger one end of turn.