Australia national team member Justin Cheung sat down to Round 9 across from former U.S. National team member Ben Lundquist. Cheung has had quite a run so far this weekend, entering this second draft round undefeated, but opened his first Limited feature match with a mulligan. From the peanut gallery, Tim Aten needled his friend Lundquist: “You were in pod 2?”

As Cheung sent his six-card hand back for five, Lundquist turned to Aten and responded with a smile, “Every time you watch my games, my opponents keep mulliganing.” Aten left the match to see what was happening in Patrick Chapin’s games behind the competitors, and Cheung kept his five-card hand, relieved of the Aten mulligan curse. 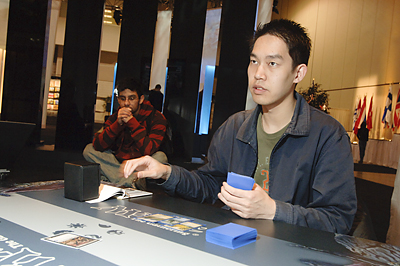 Australia’s Justin Cheung is undefeated coming into this round. The Aussie immediately set about undoing his two-card deficit with a Courier’s Capsule while Ben Lundquist drew a card of sorts by sacrificing Grixis Panorama to find a Swamp. Justin Cheung missed his fourth land drop, however, and hadn’t played a spell since the Capsule sitting on just three Islands for mana. Trying to capitalize his opponent played a Viscera Dragger and went on the offensive.

Sprouting Thrinax hit for Lundquist and when Cheung made his first threat in the form of Outrider of Jhess, Ben came right back with Scourge Devil. That dropped the elbow on Team Australia, and Justin promptly conceded after drawing no help the following turn.

The second game kicked off in “fair” fashion, with neither player opening on a mulligan. Cheung led with a Plains, the first non-Island the crowd had seen from him in the match, and Lundquist came right out of the gates with a Dregscape Zombie followed by Executioner’s Capsule. Unfazed, Justin came right back at his American foe, playing a Sanctum Gargoyle returning nothing.

Lundquist was happy to use his Capsule to kill the 2/3 and keep his beat on with the Dregscape Zombie. The attack left the score at 20-16 in Ben’s favor, but Justin stabilized with a Cloudheath Drake and a second Sanctum Gargoyle returning his first. Across the table Lundquist was in need of a red mana, simply passing his fifth turn with no play despite having not missed a land drop with a steady stream of Forests and Swamps. When he cracked a Grixis Panorama for a Mountain, it looked like things might get interesting.

Interesting was exactly what things got, though Ben Lundquist might have chosen to use a different adjective to describe it. Cheung found a Rhox Charger to join his team alongside an Oblivion Ring to deal with Ben’s Dregscape Zombie. A Kathari Screecher also hit for the Australian, and Ben’s only answer was to use Skeletonize to kill Cloudheath Drake, giving him a Skeleton to stem some of the bleeding from Rhox Charger. A Carrion Thrash for Lundquist helped stabilize the ground, but Cheung’s air force was a relevant threat, and with the score at 16-11 in Justin’s favor, Ben didn’t have a lot of time to find an answer.

Trying to capitalize on the momentum that was swinging in his favor, Justin Cheung decided to go all-in. He played his second copy of Sanctum Gargoyle to return his Cloudheath Drake, ending his ability to loop Gargoyles as chump-blockers but providing him with up to four flyers on the board (the two Gargoyles, Kathari Screecher, and Cloudheath Drake). Lundquist fell to 1 on the next attack and needed a miracle to steal the game. Not finding it, he cycled Viscera Dragger on his main phase for a second crack. When that draw also yielded no help, the players were on to the rubber game.

Tim Aten re-joined the crowd watching Lundquist’s match, and Cheung immediately started his game with a mulligan. “Are you going to start being superstitious?” Aten asked Lundquist, rolling his eyes.

Cheung opened the final game of the match on perfect Bant domain: Forest, Island, and Plains. Lundquist, meanwhile, missed his third land drop and was forced to play a Dregscape Zombie on his fourth turn. The 2/1 was met with an Outrider of Jhess from Cheung, but the Australian didn’t take the opportunity to trade when Lundquist attacked with his Zombie anyway. 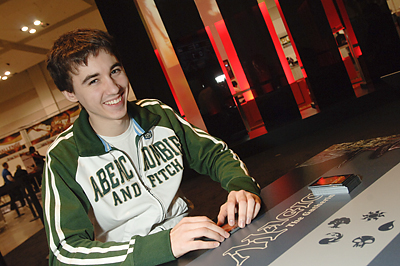 Ben Lundquist is completely comfortable having his picture taken. Really. The players seemed to be running theme decks. Lundquist played a second Zombie in the form of Viscera Dragger while Cheung went for an exalted scheme, adding Waveskimmer Aven to his board. He quickly lost the 2/4, however, after using it to block Viscera Dragger then having the final point of toughness from the flyer removed by Ben’s post-combat Blister Beetle.

Courier’s Capsule and Knight of the Skyward Eye hopped into play for Justin Cheung, but his opponent stayed on the offensive, playing a Scourge Devil that allowed him to threaten a huge chunk of Cheung’s life total with an all-in attack. Cheung considered his courses of action carefully before opting not to block and falling to 9. That left the totals 13-9 in Ben’s favor, and indicated Justin had something up his sleeve if he was unafraid of taking such a wallop.

Rhox War Monk appeared to be what Cheung was up to, but the plan was quickly made null as Lundquist answered with Executioner’s Capsule before sending his team back in to work over the last 9 points of Cheung’s life. The national team member double-blocked his opponent’s Viscera Dragger with Outrider of Jhess and Knight of the Skyward Eye and fell to 4 life. Lundquist made a heads-up play in the blocking by assigning all the damage to kill Justin’s Outrider of Jhess. The default choice would appear to be Knight of the Skyward Eye as it could pump to become a much larger blocker, but Justin was very far behind in the game. In order to get back into things, he couldn’t afford to spend mana pumping his 2/2. What he might be able to utilize, however, was an extra +1/+1 each turn from Outrider for a single lifelink attacker, something like the War Monk he had just played. Even though the Outrider may be considered the weaker card in a vacuum, Lundquist read the situation perfectly. A turn later the victory was his, as Cheung was unable to overcome the creature advantage.