2008 Worlds Round Round 5: Knight Terrors 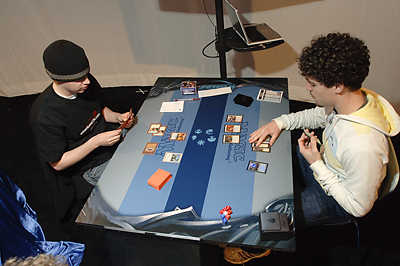 Gerry Thompson is a Constructed specialist; Australian National Champion Aaron Nicastri is looking forward to Limited.Australian National Champ Aaron Nicastri has been riding high with a phenomenal season that’s put him at the top of the Rookie of the Year list. A strong finish this weekend will seal the deal, and his 4-0 start had him well on his way. Sitting across from him was Gerry Thompson, best known for his incisive articles on Constructed. Thompson stuck to his guns about the twilight of Five-Color Control, and showed up today with the new vogue: Black-White Tokens. Nicastri bucked convention and chose the red-white control deck dubbed “Boat Brew.”

They shuffled up. Thompson’s first hand was unacceptable.

Nicastri: “That deck seems to mulligan so much.”

Nicastri led with Burrenton Forge-Tender and Mind Stone. Thompson put out a pair of Plains and shrugged away his third turn. Nicastri was likewise short, but made two more Mind Stones, so mana was not a problem. Thompson’s deck was merciful and gave him a Reflecting Pool to drop Stillmoon Cavalier. Nicastri surged ahead with Ranger of Eos for Figure of Destiny and Mogg Fanatic, but chose to get his Figure online first. Thompson had Glorious Anthem to put his Stillmoon Cavalier out of Fanatic range.

With Cavalier guarding the other side of the battlefield, Nicastri increased his forces with Spectral Procession, and then a ready-to-use Windbrisk Heights. Thompson drew Arcane Sanctum, finally getting him black mana from Reflecting Pool, and played Bitterblossom. Nicastri charged in with his Forge-Tender and fliers, one of which fell to the jumping Cavalier. He flipped up his Hideaway card: Another Ranger for another Fanatic/Figure combo. He didn’t want to miss another chance and spent both his Fanatics to axe the Cavalier.

Thompson untapped and Thoughtseized. Nicastri had no shortage of gas in hand: Ajani Vengeant, Siege-Gang Commander, Figure of Destiny, and Murderous Redcap. Thompson took the Siege-Gang and upped his air force with Spectral Procession. Nicastri sent in his Rangers and the Figure. Four tokens took them all down, and Nicastri replaced the Figure.

Thompson Thoughtseized Ajani Vengeant and dropped a second Anthem, but was way behind on board. His 3/3 Faerie had to chump the Figure and the rest of Nicastri’s team put him to 6. He checked his top card and scooped.

Thompson got to play with a full seven this game and started things off with Windbrisk Heights and a Knight of Meadowgrain. Nicastri answered with Figure of Destiny and a Heights of his own. Thompson dropped Glorious Anthem and drained Nicastri for 3 with his Knight. Vithian Stinger did not seem to be up to the task. Thompson poured on the pressure with another Knight of Meadowgrain.

Murderous Redcap showed up for Nicastri, and helped the Stinger take care of one Knight. Thompson replaced it with 6 power worth of Spectral Procession. Nicastri sent in the Figure alone, and after it went unblocked, tapped four for Wrath of God. He played another Windbrisk Heights.

Thompson had a second Heights as well, and then delivered a big elbow, Mind Shattering Nicastri’s hand away. 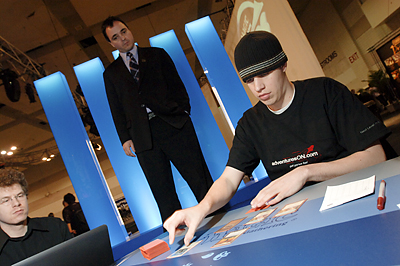 What lies beneath Gerry Thompson’s omnipresent beanie? No one knows.Still Thompson’s deck was refusing to give him a presence on the board. Gravepact and a second Anthem hit play while the diminished Redcap needled him. Nicastri broke first when his deck served up Ranger of Eos, fetching two Figures of Destiny, who hit play as well. All Thompson got was a second Gravepact. That meant that, in addition to smashing face, Nicastri was free to cash in both his hideaways: A Ranger for two Fanatics under one and Ajani Goldmane under the other. It was more than enough.

After the match, Nicastri explained that he’d decided on the deck just the night before, impressed with its showing at recent high-profile Standard tournaments. He called out Vithian Stinger as a sideboard card that people were underusing, and said his only change would be to ditch the Voices of All in the sideboard and replace them with Wispmares.

With most of the day done, he was looking ahead to tomorrow’s Limited play.

“I don’t think it’s possible for me to have tested Limited more. I’ve played every Limited GP. Shards is just such a great format, my favorite ever. It does happen in Sealed that your pool goes haywire, but most of the time in Draft the quality of your deck depends entirely on how well you draft.”