2008 Worlds Semifinals: The Monks of War

Considering how popular Faeries was during the tournament, and the population of them in the Top 8, I was very refreshed to get a chance to cover a match that featured zero Faeries that didn’t come from a Bitterblossom. Both players had to defeat a Faeries player in the previous round to make it here, though Parke had a much more difficult time fighting his way fast the pesky flyers than did Ikeda. 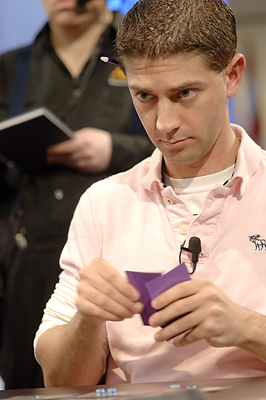 Jamie Parke responded to the Cruel Ultimatum / Tidings debate by saying, ‘Why not both?’ Both players had an uneventful first turn, simply playing lands and saying go. Ikeda did have a Figure of Destiny that he played on the second turn. He would have had it on the first, but his first land drop was an Auntie’s Hovel that had to come into play tapped. Parke had a Rhox War Monk to sit across from the Figure, but Ikeda cleared the path with a Flame Javelin and sent his Figure in.

Parke had nothing to do on his turn and simply played a land and passed to Ikeda. Ikeda was a little light on options himself and chose not to over extend. He simply attacked with his Figure and pumped it twice. In response to the second pump, Parke got rid of it with a Condemn, banishing it to the bottom of the deck and gaining Ikeda 2 life. Again, Parke just drew a card, played a land, and said go.

After untapping, Ikeda tapped out and tried to make the one-card army: Siege-Gang Commander. Parke wasn’t having any of that, though, and used a Cryptic Command to counter the Goblin and draw a card. At this point, considering he was still fairly high in life, Parke seemed to be in total control. Ikeda attacked into Parke’s open board with a Ghitu Encampment, trying desperately to make something happen. Parke was content to sit behind his untapped lands and take the 2. At the end of Ikeda’s turn, he sprung into action, unleashing a Cloudthresher that now dominated to board. The resulting swing back dropped Ikeda to 13. Ikeda drew his card and immediately conceded. He was behind in every aspect, from creatures to cards in hand to life totals. 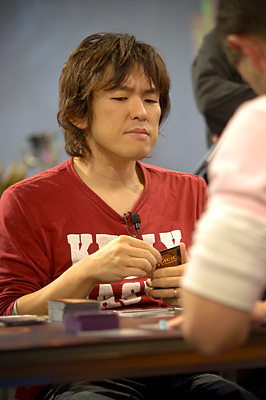 Tsuyoshi Ikeda and his Blightning Beatdown deck try to Ikeda managed a much stronger start to the second game. His second-turn Bitterblossom was something Parke would have to deal with, and fast. When Ikeda attacked with a Boggart Ram-Gang on the next turn, Parke used Condemn to get rid of it, which gave Ikeda even more resources to trade for Faeries. Parke did manage to find himself a Rhox War Monk on his turn, but it met an early death at the beak of an evoked Shriekmaw.

Parke had four cards in play and four lands as he finished his turn and passed it back to Ikeda. Ikeda, who was sitting on three cards, was content to simply sit back on his Bitterblossom and ride the Faerie tokens to victory. He simply attacked with his Faeries and passed the turn. At the end of his turn, Parke used a Jund Charm to wipe away the Faerie tokens and make Ikeda start again.

Parke used a Mulldrifter to get a couple more cards in his hand and provide a flying blocker, but an Incinerate from Ikeda sent “Big Daddy Drifts” to the graveyard before it could take any Faeries with it. After untapping, Ikeda played the incredibly powerful Spiteful Visions. Now every draw hurt, and the clocks on both players got just that much faster. Ikeda was in the lead with a couple of Faerie tokens and a 17–15 edge in life, but things could still change.

During his turn, Ikeda dropped to 14 from Spiteful Visions and Bitterblossom. He sent his token into attack, but it never saw Parke’s life total. Before it could get there, it was ambushed by a flashy Cloudthresher, which cleared away the tokens, reduced the clock even further, and gave Parke a massive attacker. After the ‘Thresher was done wreaking his havoc, Ikeda thought for a moment before aiming some Blightning at Parke. That knocked a Pithing Needle and a Vivid Meadow out of his hand and dropped the life totals to 12–10 in favor of Ikeda.

During his upkeep, Parke played an Esper Charm to kill the Spiteful Visions. After drawing his card for the turn, Parke had to stop for a second as Ikeda called a judge over. There was a little confusion about the card’s trigger and how many cards Parke could have and should have drawn. After a bit of deliberation, that number ended up being only one, but had he destroyed it during the draw step with the trigger on the stack, he could have gotten an extra.

Jamie just sent his monster over, and it was promptly blocked by Ikeda’s Faerie Rogue token. With nothing else to do, Parke just passed the turn back. For his turn, Ikeda simply replaced the Spiteful Visions he’d lost the turn before and passed the turn. During his next upkeep, Parke snagged Spiteful Visions to give it a read. “I gotta make sure I do this right,” he said. He thought for a minute and drew the first card, taking a point of damage. After a good thirty seconds or so, he finally relented and decided to just draw the other card and take the other point of damage. That put him down to 8. After edicting Ikeda with his Thresher, he passed the turn. 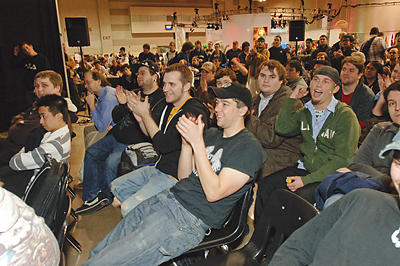 Ikeda drew his cards and made his next token, dropping him to 4. When he said go, Parke used a Cryptic Command to bounce the last defender, clearing a path for his Cloudthresher to finish Ikeda off. As Ikeda scooped up his cards, a cheer erupted from the assembled American masses in the viewing room.

“Your friends?” Ikeda asked with a grin.

Both players got a good chuckle as Jamie said, “Yeah, I guess you could say that.”

Things looked incredibly bad for Ikeda’s chances of extending the match. On the play, he was forced to double mulligan before finding a five card hand he liked. He actually told Parke he was going to keep after seeing just two cards of his five card hand. Parke gave a little laugh as he tossed his hand back as well.

“Thank you,” Ikeda responded with a gracious smile.

Ikeda got started with a pair of Ghitu Encampments on the opening turns of the game, then found his way to a hasty turn-three Boggart Ram-Gang. The Ram-Gang would once again fail to reach Parke, as a Condemn sent them packing just like the last time. Even stronger, though, was the Condemn the following turn that got to send an Encampment to the bottom of Ikeda’s deck. 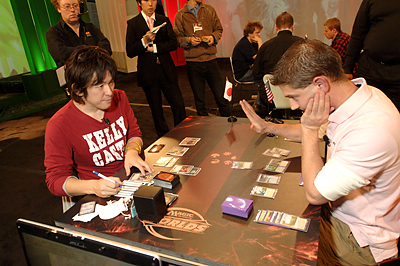 Parke puts Ikeda’s plans on hold. With Ikeda now sitting on only one Encampment among his three lands, Parke decided to play a Rhox War Monk. All Ikeda could do on his turn was play a land and a Bitterblossom, leaving him with two cards. Parke got to attack with his War Monk, which pushed him up to 23. Ikeda was also riding high on life, thanks to the pair of Condemns, and, after the hit from the Monk and a shot from his Bitterblossom, he was finally reduced back down to his original 20. He passed the turn to Parke, but had a surprise waiting for him. During Parke’s upkeep, Ikeda aimed a Flame Javelin at the Monk with a bit of a flourish. It was the right time to do it, since Parke would have to almost tap out to stop it. Parke did have a Cryptic Command for it, and Dismissed the Javelin, tapping out in the process. He attacked with his War Monk and ended the turn up by a decent margin, 17–26.

With Parke tapped out, Ikeda took the opportunity to empty his hand of a land and Spiteful Visions into play. He was down to 16 and would be dropping by 3 every turn, but he needed the extra draws to find some help. After Rhox War Monk Monk ate Ikeda’s token, Parke added a second Monk to the battle. The lifelink from the Monks was more than offsetting the loss of life from Spiteful Visions, and it seemed like it gave him a huge advantage in the long run, but Ikeda could only focus on not dying in the immediate future, so the long term wasn’t even a consideration.

Ikeda drew his card, made a token, and played a Ghitu Encampment. Parke untapped and sent his Monks at Ikeda. Before Ikeda could block, a Cloudthresher cleared the board. It cleared his hand, too! Because of the impossible situation he was facing, and the fact that his only cards in hand were lands, he knew he was dead. He dropped his hand face-up on the table and shook Parke’s hand in defeat.

Jamie Parke advances to the Finals by defeating Tsuyoshi Ikeda 3-0.