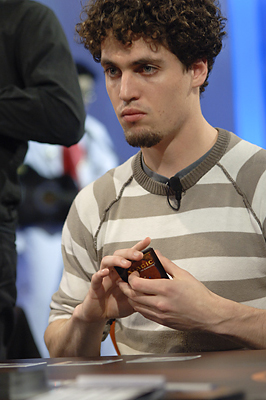 Australia team captain Aaron Nicastri wants this win. Can you tell? Aaron Nicastri’s Blue-Black Tron deck was similar to the one Sam Black had just dismantled in the Semifinals. But Black admitted it was luck. The large-scale Tron deck is specifically designed to take apart the little green mana hounds, and it’s hard to believe a deck suited to beat Elves can still fall short. That’s just the power of the Elf.

Though Black had luck, Nicastri had something else: enthusiasm. After the results of the individual Semifinals, he had clinched the Rookie of the Year crown. Nicastri was clearly elated. And though he’d just picked up one title, he was eagerly awaiting number two.

Black won the roll and Nicastri threw back his first hand (the luck continues). Even though Nicastri had all three Urza lands and a Sundering Titan in his opening hand, a turn-three 7/10 meant very little against the every-flowing river of Elves. After keeping his six, Nicastri led with a tapped Watery Grave, following Black’s Birchlore Ranger.
Elvish Visionary and an attack was next for the American after Urza’s Tower entered the game.

At this point, Sam had a brimming hand. “Turn three!” he said to his team.

Aaron sat silently flipping cards back and forth as the Elves slowly bubbled from the library into play. More and more spewed forth and before long, Sam splayed his hand on the table and said, “Do we have to do this?”

Aaron inspected Black’s hand closely, and then extended his own. And just like clockwork, Elves did was it does best.

As they shuffled for Game 2, Black was talkative with his teammates; Nicastri, however, was lost in thought. This was the big show, the culminating event for Australia, and Nicastri clearly wanted to make it happen. 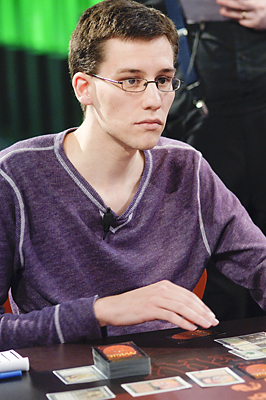 Sam Black is poised and ready. The Australian captain thought long and hard about his decent seven-card hand. He asked Brandon Lau, who confirmed its decency: “It’s OK.” But against Elves “OK” doesn’t cut the mustard, and Nicastri agreed with the condiment analogy; he confidently and deliberately went down to six. Black did the same.

“That’s pretty rancid,” teammate Michael Jacobs chimed in. Black agreed, throwing it back for six fresh ones. With disgust, he pitched the second back as well. “That draw featured all four Birchlore Rangers.”

Now, traditionally, the mulligan process is shorthanded in reporting, but with a deck like Elves, being so draw-dependant, each mulligan decision has severe consequences on the match. Nicastri was going first and had clearly sided in some bombs, namely Night of Souls’ Betrayal, that could single-handedly win the game for him. If Black’s hand was good, though, Nicastri’s tech wouldn’t be good enough.

Black’s five-card hand had Glimpse of Nature, a land and Elves—it’s good.

Tolaria West and a Swamp faced off against a Forest and a Llanowar Elves. One swamp meant Nicastri was halfway to his required two black mana for the Legendary, game-breaking enchantment. Colored mana is hard to come by in a deck featuring twelve Urza lands, and artifact mana could rarely be depended on. Viridian Shaman and the sideboarded Nulmage Shepard could give artifacts fits.

The giddy Black (the person, not the color) had calmed a bit as he laid his third land. He stared at his hand, conferred with Jacobs, and even though the two both decided Nicastri had a Condescend, he tried for a Glimpse of Nature. Nicastri did indeed Condescend for one—Black paid—and Nicastri bottomed both his scryed draws. The card-drawing Sorcery resolved, as did a Birchlore Rangers and a Llanowar Elves; Black drew two cards and passed the turn. Just land number three for Nicastri—Urza’s Tower—and it was back to more Elves shenanigans. A Wirewood Hivemaster from Black was followed by a Heritage Druid. Three Elves tapped, but only to attack, and it was 16–20 in Sam Black’s favor. What did Nicastri have? Could he stop the assault?

Those questions were answered when his end-of-turn Thrist for Knowledge revealed exactly what he had (and also what he didn’t). One of the two cards he discarded to the Thrist was the powerful Night of Souls’ Betrayal. Clearly he wouldn’t discard such a beating for nothing, so he must have had the second one in hand. After he drew for the turn, Nicastri tapped for a Signet, and soon passed with two mana up. Sam brought his sideboarded beats as well—the reusable Nullmage Shepard. It fought though a Condescend (again bottoming two)—”You should blow up the Signet,” Jacobs chided—and then immediately blew up the Signet, just as Jacobs suggested. Three more damage came in, and it was 13–20. 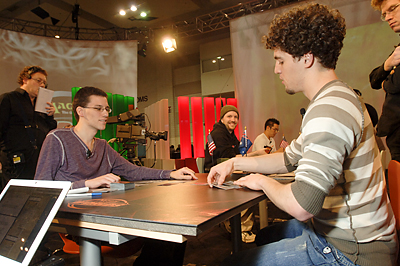 Teammate Michael Jacobs glances over as Black and Nicastri race toward the finish of the Extended match. ”Get there?” Black asked Nicastri. The discarded Night of Souls’ Betrayal was a big tell as far as the Americans were concerned. Nicastri had bottom four scryed cards, and he’d dug through three cards with Thirst for Knowledge. The Australian needed black mana.

“I guess not,” said Black as Nicastri shipped the turn. After a Wirewood Symbiote, Black swung in for 9, taking Nicastri to 4. Before passing, Black returned a Birchlore Rangers to his hand and then played it back morphed. A 2/2 does much better against a resolved Night of Souls’ Betrayal than a 1/1.

The Australian dug with another Thrist for Knowledge. He tried to mask his desperation as something other than what it was, but the strain was showing through. The as-yet uncrowned Rookie of the Year was on the back foot. On the draw step, however, he found what he was looking for. He put a Watery Grave into play untapped, sunk to 2 life, then left one mana open, after all but nuking Black’s board with the Night of Souls’ Betrayal. A painful land wasn’t the optimal draw, as Black still had 2 power of creatures on the board (the Nullmage Shepard and the face-down Birchlore Rangers), but it was better than nothing at all.

Black attacked with both of them, and Nicastri killed one with a Slaughter Pact. The Aussie was at 1, and there was a 1/1 left standing. Nicastri slowly untapped, paid the Pact upkeep cost, drew his card, and then, as deliberately as everything else he’d done in the match, he scooped up his cards. He showed his hand: Gifts Ungiven, Chrome Mox, Sunken Ruins, and Smother. He had dug through at least ten extra cards for the black mana, but it came one turn too late. 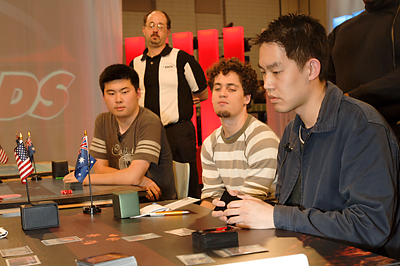 With the U.S. now up 1 match to 0, attention shifted to the other two matches in progress ....