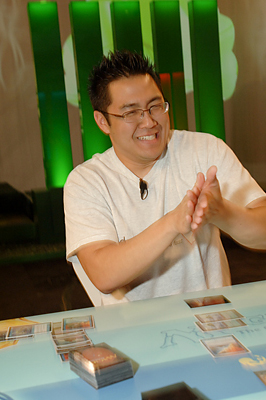 Paul Cheon of the United States is excited to get down to business. Cheung won the flip and played a turn-two Sinkhole on Cheon’s Island. Cheon countered it with Force of Will, pitching Trinket Mage, and then played an end of turn Brainstorm. On his second turn, Cheon played Standstill, which Cheung countered with Daze. Cheung had another Sinkhole, which was able to resolve this time, taking out an Island. Cheon had another land and tapped them both to play Counterbalance.

Cheung removed all of the cards in his graveyard to delve out a Tombstalker, which Cheon attempted to counter with Force of Will. Cheung had a Daze for the Force of Will and a Stifle to counter the Counterbalance trigger.

Cheung played a Ponder, which was countered by Cheon’s “blind” Counterbalance that revealed a Brainstorm. After his Ponder got countered, Cheung attacked and knocked Cheon down to 11. At this point, the only card in Cheung’s hand was an Underground Sea that he had returned with Daze, and the only card in Cheon’s hand was a Spell Snare that Cheung did not know about.

Cheung drew and cast a Brainstorm, which was countered by Cheon’s Counterbalance which revealed a Spell Snare.

Cheung attacked Cheon down to 6, but Cheon’s counterattack with Phyrexian Dreadnaught and Mishra’s Factory knocked the Australian down to 2. Cheung needed to draw something special to get him out of this spot, but the only thing his deck could muster was a Tarmogoyf which Cheon countered with the previously seen Spell Snare. 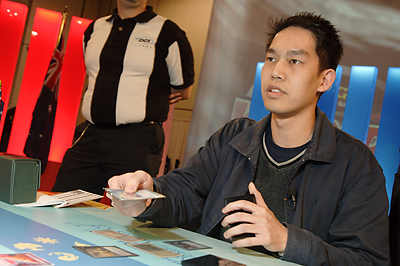 Justin Cheung of Australia makes things happen. Cheung mulliganed down to six. His turn-two Tarmogoyf resolved without a fight, but Cheon came back with a Counterbalance. Cheung had a Krosan Grip for the Counterbalance, which prompted Cheon to yell, “Come on Trinket Mage!” Cheon’s deck wasn’t as kind to him as it had been the previous game, as he revealed a Brainstorm.

“I think I kept a bad draw, guys.” Cheon said to his teammates.

Cheon played another Trinket Mage on the following turn, this time fetching Phyrexian Dreadnaught, but he was clearly backpedalling.

When Cheung attacked with his Tombstalker and Tarmogoyf, Cheon had to chump block the Tarmogoyf with a Trinket Mage and still fell to 7.

Cheon drew for his turn, played Brainstorm, and conceded knowing that he had no answer for, and no way to race, the gigantic Tombstalker.

Cheon kept his opening seven, but Cheung went down to six for the second game in a row. Cheon played a second turn Counterbalance, which Cheung responded to with Brainstorm and a Force of Will removing Stifle. Cheon had a brief conference with his teammates before allowing his Counterbalance to be countered.

Cheung again had no play on his turn, and Cheon was able to attack for 4 with his Trinket Mage and Mishra’s Factory, putting Cheung down to 9.

Cheung drew a Wasteland for the Mishra’s Factory, but he was still under considerable pressure from the Trinket Mage.

Cheon attacked Cheung down to 5 with the Trinket Mage and passed the turn only to see Cheung destroy his 2/2 with a Snuff Out.

Cheon untapped, Brainstormed and, knowing that he had no good plays for at least the next two turns, cast a Standstill. 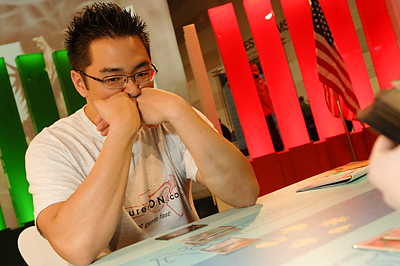 Cheon is much less excited when both he and Cheung stop making things happen. The previously action-packed match then grinded to an immediate halt. Cheung was handless when Cheon played the Standstill, but both players had discarded many times before either player made their next play.

“Breathtaking,” chimed in teammate Michael Jacob after about twelve turns of inactivity. The Extended match was long since finished, and the Standard match had been paused pending the outcome of the Legacy match. All eyes were on Cheon and Cheung.

After this went on for a little bit longer, the players counted each other’s libraries, and it was revealed that Cheon had 18 cards left while Cheung had 16.

Many, many turns of discarding later, Cheon played an end-of-turn Brainstorm popping his Standstill and forcing his opponent to draw three cards, leaving him with a mere three cards left in his library.

On his next turn, Cheon played a Mishra’s Factory and passed. Cheung played a Tombstalker which Cheon attempted to counter with Force of Will. Cheung Force of Willed back, but Cheon had a Red Elemental Blast. After his attempts to make a flyer were unsuccessful, Cheung tried to play a Tarmogoyf, only to see it Spell Snared. 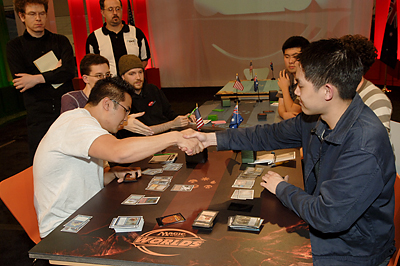 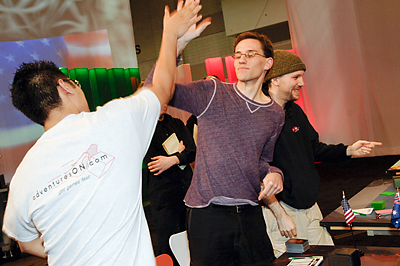