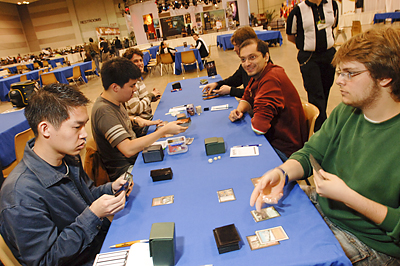 On the left, the Australians. On the right, the Brazilians. To the victor, the Finals. Willy Edel and Aaron Nicastri are both players whose early success helped to propel their countries into the Magic spotlight, and they met this weekend on the team Semifinals stage.

Between Paulo Vitor Damo da Rosa’s Top 8 on the individual side of Worlds and Brazil’s spot in the team Semifinals, it’s clear that Brazil is just as much a force on the Magic scene as it has been for the last few years. A win in the teams portion at Worlds for Willy Edel, Luiz Guilherme De Michielli, and Vagner Casatti would certainly cement that.

Nicastri is the first Australian to make this big a mark on the professional Magic scene since Ben Seck. Can Nicastri lead his country into the Magic spotlight in the same way that Edel and da Rosa were able to do for Brazil? Leading his country to the Semifinals of the teams portion of Worlds is certainly a good start, but he still has the chance to win the Rookie of the Year title for himself and the team trophy along with Justin Cheung and Brandon Lau.

Cheung got the Legacy match off to a fast start with a Thoughtseize taking a Tarmogoyf and seeing that De Michielli only had two lands in his hand. Cheung followed his turn one play with a Wasteland on De Michielli’s land. This could have been an absolutely crippling play, but De Michielli drew additional lands that would allow him to play his spells. Cheung countered De Michielli’s first few spells with Daze and Force of Will, cards which he was able to put to use once again when he removed them from the game to reduce the cost on his Tombstalker. De Michielli was finally able to resolve a Countryside Crusher, but that wasn’t enough to race Cheung’s Tombstalker.

Over in the Standard match between Brandon Lau’s Red-White Reveillark deck and Willy Edel’s planeswalker-heavy Five-Color Cruel Control deck, things seemed to be going pretty even, as Edel had Condemned Lau’s first Figure of Destiny and then Jund Charmed away Lau’s Ranger of Eos and Figure of Destiny.

When Lau played a second Ranger of Eos, a Reveillark and an Ajani Vengeant, Edel couldn’t muster much more than a Kitchen Finks, and the Australians were up a game in two of their matches. 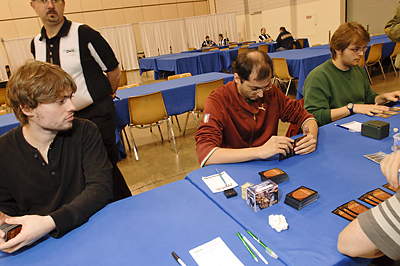 From left to right, Brazilians Vagner Casatti, Willy Edel, and Luiz Guilherme De Michielli. In the Extended matchup, Casatti opened on a Raven’s Crime, which is normally his best Game 1 tool against Nicastri’s Blue-Black Urzatron deck. Unfortunately for the Brazilians, Nicastri drew and played his singleton Crucible of Worlds on turn three. Not only is Crucible of Worlds an excellent card against Casatti’s Death Cloud deck, it’s also a nearly perfect answer to Raven’s Crime.

Casatti still had a trick up his sleeve. On Casatti’s third turn he retraced his Raven’s Crime and played a Life From the Loam to get back three lands. Nicastri simply played a land and passed.

Casatti retraced Raven’s Crime, then retraced it again, knocking Nicastri down to one card. Casatti retraced Raven’s Crime again and was about to knock out Nicastri’s final card when Nicastri tapped his Urza’s Power Plant, Urza’s Tower, Island and Watery Grave to play Gifts Ungiven for Urza’s Mine, Academy Ruins, Triskelion and Mindslaver. Because of the Crucible of Worlds, Casatti was forced to give Nicastri the lands.

Soon after, Nicastri was recurring Mindslaver with Academy Ruins, and the Australians were up a game in all three matches.

Back in the Standard match, Edel mulliganed and Lau opened on a first-turn Figure of Destiny. Edel had a third turn Kitchen Finks, which Lau matched with a Stillmoon Cavalier. Edel played a land and passed his fourth turn without casting any spells, clearly representing Cryptic Command. Lau respected this and simply attacked with his two creatures, transforming his Figure of Destiny into a 4/4 Kithkin Spirit Warrior so it would survive its combat with Kitchen Finks.

Edel passed his next turn without any action, giving Lau another good attack that knocked Edel down to 13. After combat, Lau played a Ranger of Eos and protected it against Edel’s Cryptic Command with a Guttural Response. As if this wasn’t enough, Lau had a Reveillark on his next turn to Edel’s ... nothing ... and suddenly the Australians were up a match and up a game in the other two matches. In order for the Brazillians to advance to the Finals, they were going to have to mount a serious comeback. 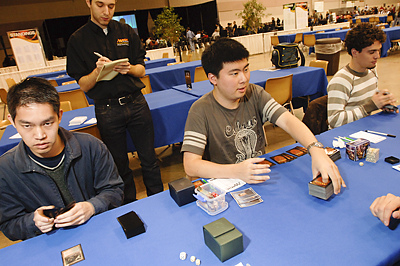 From left to right, Australians Justin Cheung, Brandon Lau, and Aaron Nicastri. In Extended, Casatti had a fairly quick, disruptive draw with a Kitchen Finks, a Ravenous Baloth and a Choke. Nicastri wasn’t able to get anything going fast enough, and when he tried a last-ditch, main phase, Gifts Ungiven he gave Casatti the opportunity to resolve a lethal Death Cloud, sending them into Game 3.

In Legacy, Cheung deliberated for a while before he decided to keep a hand with Tarmogoyf, Tombstalker, and five lands. De Michielli used a Mox Diamond to power out a turn-one Dark Confidant that Cheung had no answer for. A few turns later, each player had added two Tarmogoyfs to the board. This staredown didn’t last for long, as De Michielli was able to Burning Wish for a Chainer’s Edict.

Cheung tried to put up a fight, but the mountain of extra cards that De Michielli drew off of his Dark Confidant were just too much for him to handle.

The commanding lead that the Australians had had just moments before had turned into the smallest lead possible.

Back in Extended, Nicastri drew his opening hand in Game 3, which consisted of Urza’s Power Plant, Urza’s Mine, Crucible of Worlds, Damnation, Chrome Mox, and 2 Dimir Signets. He asked his teammate Brandon Lau what he thought about the hand, and Brandon said that it was “iffy.” Nicastri chose to keep, and a turn-one Thoughtseize let Casatti see the cause of Nicastri’s deliberation. Casatti took Crucible of Worlds, which had caused him so much harm in the first game.

Meanwhile, in the Legacy match, Cheung played a Tarmogoyf on turn two. De Michielli played a Wasteland on Cheung’s Bayou that left Cheung with a Wasteland as his only land, before playing Engineered Explosives for 2, which Cheung Force of Willed.

Cheung attacked with Tarmogoyf and passed the turn without playing a land. De Michielli played a Countryside Crusher that was looking awfully threatening against Cheung’s board of Wasteland and Tarmogoyf. 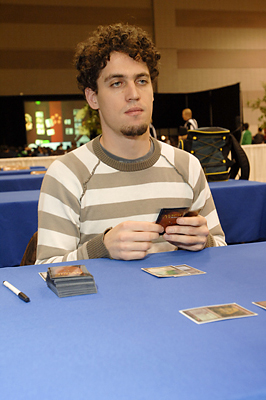 Australia team captain Aaron Nicastri aims for the top—and for the Rookie of the Year title.For a moment, things were looking somewhat grim for the Australians, but their luck turned when Cheung drew an Underground Sea that turned on his hand full of Snuff Outs and Diabolic Edicts.

A few turns and a few attacks from Tarmogoyf later and the Australians were on their way to face the United States in the team Finals.

Even though their match was no longer relevant, Nicastri completed the sweep on the back of a Makeshift Mannequined Sundering Titan.

Australia defeats Brazil 3 matches to 0 and advances to the team Finals!

With Australia’s win in the Semifinals, Hannes Kerem would have to win the World Championships in order to beat Nicastri for the Rookie of the Year title.