2010 Magic: The Gathering World Championships - Chatting with the Winner of Judge Article of the Year

Justin Hovdenes is a level 2 judge from Rapid City, South Dakota. The 27 year old small business owner is also the 2010 Judge Article of the Year winner. His article, which explains how the layers in Magic work, earned him the top prize which was full sponsorship to the 2010 World Championships in Chiba, Japan. The reward marked the realization of a longstanding goal of Justin's, which was to visit Japan as a member of the judge program. 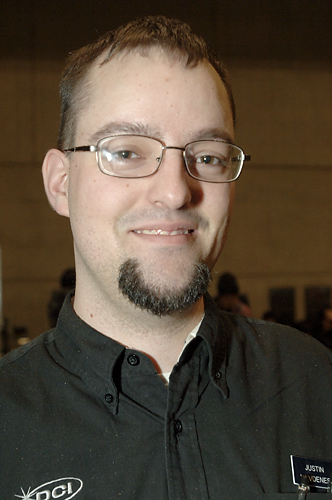 2010 Judge Article of the Year winner Justin Hovdenes finally made it to Japan.

I sat down to chat with Justin about his win, the impact of the judge program on his life, and what his trip to Japan has been like.

Justin Hovdenes: Right around Fourth Edition. I lived out in the middle of nowhere, and the nearest kid my age was five years older but he played. We'd hang out together and play Magic. I remember my first deck was Dwarven Warriors and Murk Dwellers, basically all the free cards he was be willing to give me!

Bill: When did you first get into judging?

Justin: The Lorwyn Prerelease was the first time I judged. I was able to pass the test on the first try. At that event I talked to some of the other judges and I felt judging was fun. Then they started talking to going to events outside the United States. Within three months I decided my priority was to get full sponsorship to Japan. That was a month or two after Lorwyn, and I finally completed that journey this weekend.

Bill: Talk to us a bit about the contest. What was it and how did you win?

Justin: When they were describing Judge Article of the Year, they said they would break juding down into four categories. They would then judge the best article from each of those categories and vote on which was best overall. [Worlds 2010 head judge] Riccardo Tessitori won, but it was decided if any level 4 or 5 judge won they would pass the prizes down. They didn't tell us when they announced the competition what the prize was going to be, they just said there would be a cool prize at the end. Carlos Ho sent me the email congratulating me after I won and then told me the prize before they announced it on the list. That was pretty cool and my mind was made up pretty immediately for Japan.

Bill: What was your reaction to finding out you won?

Justin: Swearing? [laughs] I asked my wife not to divorce me because she's always wanted to go to Japan, but she understood it was my goal to get to Japan and she told me if I ever made it to Japan and didn't bring her with .... But when I got the Article of the Year, she said she would forgive me for going alone this one time. I promised to get her lots of presents to make up for it!

Bill: Tell us a little bit about your article. What was it about?

Justin: The article was covering layers. It's one of the more complex parts of the rules, but that has gotten easier because of the Magic 2010 changes. I originally wrote the article for a seminar in Worlds Memphis, which Carlos Ho helped me with. John Carter, a week or two after that event, asked if I could turn it into an article. He thought it would be really good, so I revamped the whole thing and remade it, keeping the visual element. When I sent it in, Wizards said, "We got your article, but we're not going to post it. We'll tell you why in nine months."

Eight months later the Magic 2010 changes came, which kind of made the article null and void. So I went back through and redid it for the changes and resubmitted it. I've been working on it .... It was two years in the making to get that article where it was.

Bill: How has being involved with the judge community impacted you? Can you describe what being a part of the program means to you personally?

Justin: It's given me a reason to leave home. I constantly travel. I never fly to Grand Prix, I always drive to them, but I give myself a fifteen-hour drive range. I've been to Chicago, Kansas City, Minneapolis, Denver, I once traveled seven hours to judge a PTQ. It's a break from regular life and allows me to be a geek for a weekend.

Bill: Do you feel a level of camaraderie with your peers in the judge program?

Justin: Anybody who sticks with the judge program for any amount of time feels camaraderie. My first big event, Worlds Memphis, is where I met Eric Levine and now I always love hanging out with him. We'll play Commander and Momir Vig. There are definitely a lot of judges I just love seeing all the time. Ingrid Lind-Jahn and Peter Jahn, Scott Marshall.

Bill: So how has the trip to Japan been so far? Have you visited any places you thought were cool?

Justin: It's been amazing. I got to spend a day in Akihabara, which is my favorite part of the trip so far. It's kind of an anime/manga electronics district with a TON of stores. You can get all sorts of computer and electronics stuff as well. Most of my wife's presents come from there!

Bill: Have you experienced any big surprises while in Japan?

Justin: The locals. As long as they can understand you, they don't have any problem helping you find where you're trying to go. Stopping random people on the street, they're almost HAPPY to help you. Definitely the biggest surprise for me is how rare it is to find a trash can, but yet there's no trash, no garbage anywhere.

Bill: What has judging the World Championships in Japan been like?

Justin: I did Public Events day one, and then the main event yesterday, and I've been spending my time about half and half between the two today. Judging the main event is very similar to judging other events I've done before. This is my fourth Pro Tour for judging, but on public events the language barrier is a challenge. Pantomime is huge, being able to gesture by pointing at cards that you're talking about. In the worst-case scenario, you find a judge who can speak both Japanese and English. Luckily we have a ton of local Japanese judges who speak English very well.

Bill: Have you worked with Japanese judges before?

Justin: This is the third event I've worked with Makinosan. Usually I like to spend time talking with him. The first couple of events he was at with me he was kind of introverted, so I felt like I didn't want him to feel alone or segregated. Now he's been helping me with my Japanese, which I've been trying to learn. I spent a good six months learning the language and got up to about 500-600 words, but when I started up my business, it basically ended my studying of Japanese. I'm hoping to get it restarted here once I get back home. Being in Japan has refueled the desire to learn Japanese. It would be immensely useful if I had that skill to translate back and forth on the Pro Tour, and it would be nice to have an AMERICAN learn a foreign language for once instead of always the other way around.

Bill: Share with us your closing thoughts for judges looking to become more involved with the program...

Justin: When I wrote the article, it wasn't with the intent to win something because there wasn't a contest yet; I kind of dumb lucked my way into it. I followed what Andy Heckt told me when I was level 1. I asked him what I needed to do to get to an international event. He said helping with judge testing, getting to events, and being willing to pay for your travel, particularly early on. The last thing he mentioned was writing articles, so I moved in to that after volunteering to do a seminar. The more you volunteer yourself and spread yourself around the judge program, the more likely you are to be recognized for your work. It's not about doing something for yourself, but doing something to make everything better. I'm a believer: judge Magic, see the world.

If you want to read Justin's article, you can check it out in the archives here.