Life in 3-D – A Masterclass with Mr. Okubo

Mr. Okubo and his team are a unique and wonderful fixture on the Japanese Magic scene. They produce incredible 3-D cards, by taking six or so cards and painstakingly cutting them out, and layering them up. The final products of this work are beautiful and consistently draw crowds at every Japanese event. Not for sale, Mr. Okubo and his team will occasionally trade for more cards with their finished pieces, ensuring that they always have new projects to work on.

At Worlds in Chiba, Mr. Okubo kindly offered something rather special: an insight into how a 3-D card is made, in a special class, going through every step of the process.

In some respects, the physical cutting of the card is only one small step in the process. With any card, when working out a 3-D version, it is important to work from back to front, with each layer containing fewer elements than those underneath. With any new card, mapping out what you are going to cut comes before any reaching for sharp knives.

For the class I was taking with Mr. Okubo, there would be no scalpels. It wasn't that he didn't trust me with a knife, but that the time and precision that goes into cutting each layer is significant enough that it isn't something one can learn in a couple of hours. Mr. Okubo's suggestion for anyone looking to get started is to take a fairly simple 3-D scene, like on a basic Mountain, and, working from there, cutting out gradually more and more background for each layer closer to the top.

For my class, I was presented with all the pre-cut elements for Prodigal Sorcerer. Little did Okubo-san know that Tim, my namesake, is the card I would have chosen even if offered every Magic card going. 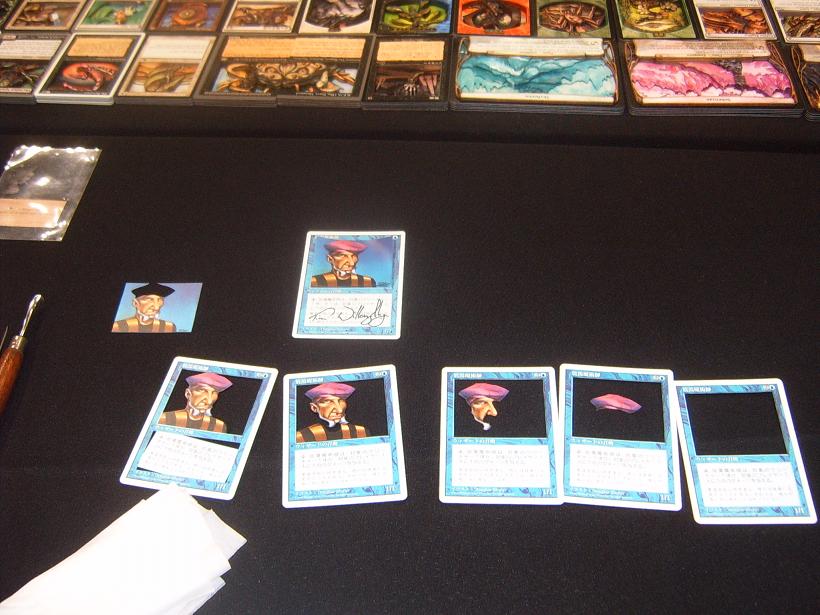 One fun fact about 3-D cards that is not widely known is that all of them made by Okubo-san and his team are signed on the text box of the base layer. The very first thing that I did with my Prodigal Sorcerer was to do just that.

In terms of equipment for making a 3-D card, there was nothing that could not be bought in most craft stores with a little searching. A cutting mat and a good scalpel are the starting point for the cutting part, but as I soon found out, there is plenty more to do than just cutting. You'll need some tissues, toothpicks, silicon-based glue, a tool for creating indentations in card, and probably a pair of tweezers. Over and above all these things, a steady hand and some patience are critical. 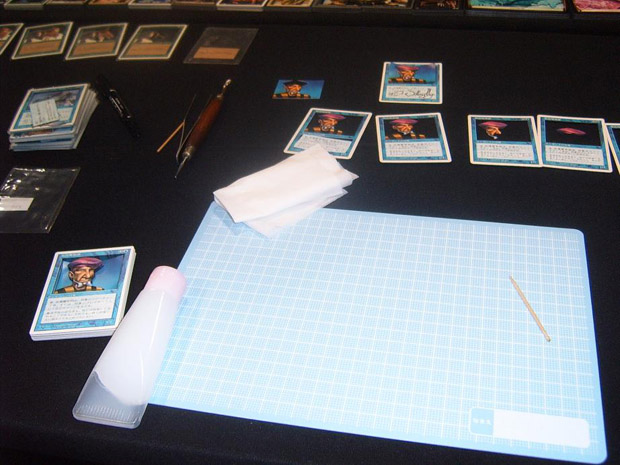 When building a 3-D card, the thing that gives it that real third dimension is a bit of space between each layer of card. This is achieved by adding in blobs of silicon glue that act almost as little pillar on which the card stands. It is important that these blobs of glue are of uniform thickness, and are in the same place on each layer. This makes the card more stable, and the overall effect at the end neater. 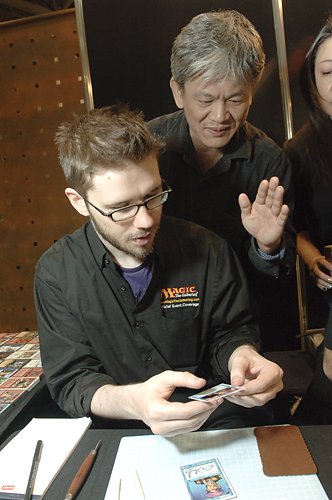 I had thought going in that the gluing stage was simply going to be about positioning and gluing the layers together. There is more to it than that, though.

Each layer features small amounts of bending and shaping, to create a fuller 3-D effect. On my Prodigal Sorcerer, for example, a small amount of work to have the throat bending, to have a curve on the body layer at the shoulder, an indentation around the eye to set it back all go toward making a full 3-D effect.

Even more amazing, where there is hair, Mr. Okubo likes to take a scalpel and gradually peel back layers of cardboard from the back of the card, so that the hair does not look so thick, and can be more realistic. For example, on Prodigal Sorcerer's beard. 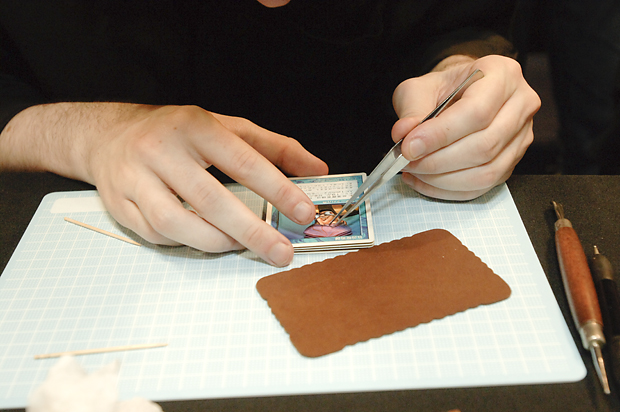 Once you get to the last few layers of card, there are smaller and smaller parts to glue. Here is where the tweezers come in, and increasingly delicate gluing. The good thing about silicon glue is that if you mess up, and are fast, you can take a layer off and have another go.

I didn't take too many goes, honest. 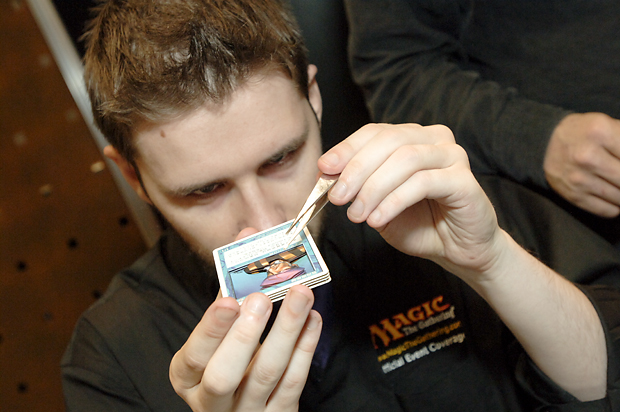 The finished product is something that by Mr. Okubo's standards is not super impressive, but that I am very proud of. Look at him, he's got ... depth. 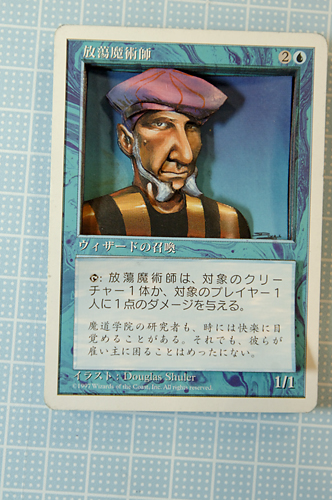 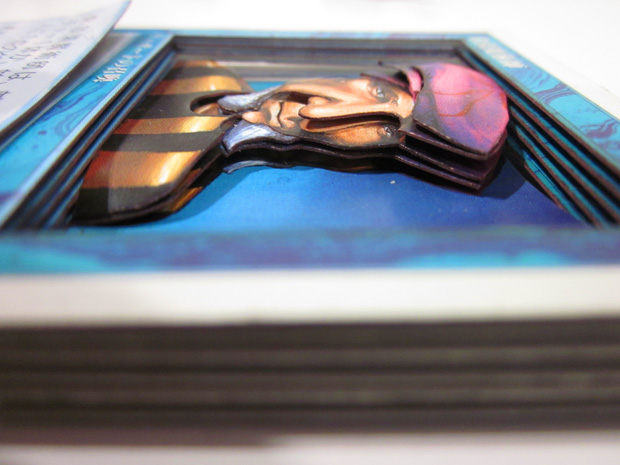 If you ever have the good fortune to visit a Japanese Magic event, be sure to visit Mr. Okubo and his team to see how the best do this amazing art. If you want to try it for yourself, I hope that this short introduction helps. 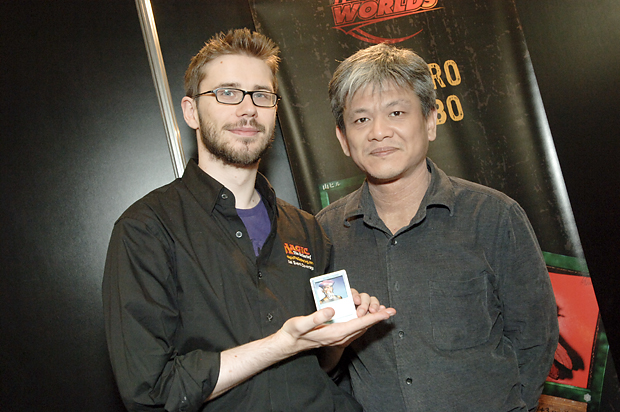