As they neared the finish line in the Magic Online World Champs, it was time for the December Dozen to break out their Standard decks. Not surprisingly, what they chose to play was informed heavily by what was played in the Individual World Championships two days ago. Three players opted to battle with the White-Blue Control deck Caw-Go, two with Blue-Black Control, and one with Green-Blue-Black Control. Everyone else ran Valakut Ramp.

Round 1 saw Brad Nelson close the gap between himself and Akira Asahara, when Asahara stumbled against Jakguy Subcharoen, and Nelson beat Oliver Oks. Not far behind Nelson were Bing Luke and Carlos Romão, both also picking up wins.

Asahara reassured his lead in Round 2 with a win over Shintaro Ishimura, while Meng Fan Xuan crippled Luke's chances at a finals appearance, playing spoiler from last place. Logan Nettles moved up to fourth place with a victory over Mongkol Techarattanaprasert, and Romão beat Nelson to but himself into second place and push the American down to third.

Romão continued to gain momentum in Round 3, beating Luke in two to solidify his place in second. Nelson fell from Finals contention when his Caw-Go deck succumbed to O'Bryant's Valakut in Game 3, an Inferno Titan finishing what a Gaea's Revenge had started. Not surprisingly, Asahara was the first player to lock up his place in the Finals, his Celestial Colonnade only just managing to outrace Oks's Valakut and its Mountainous chums.

At this point, it became apparent that Reid Duke had been sneaking up the inside. After going 2-2 in Extended and a mere 1-2 in Draft, Duke had rattled off three straight wins to end round 3 in the three-way tie for third place with Nelson and Nettles. Now an aside on the unique point structure for this event.

Instead of the usual 3 points for a win and nothing for a loss, the players are rewarded more for showing aptitude in any one format than they are for being consistent across all three. The first win in a format nets them 4 points, the second gets them 6, the third 7, and the fourth 8. Because Nelson won only one of the first three rounds, the maximum he can gain from a win in the last round is 6 points. Duke however, was 3-0 at this point, and a last round win would give him the full 8 points. With Romão (also 3-0) on 37 points, a win for Duke and a loss for Romão would mean Duke would be facing Asahara in the Finals.

But let's not get ahead of ourselves just yet.

Sure enough, Romão and Duke were paired in the final round, making them the match to watch. It just so happened they were seated with their backs to each other, so a small crowd gathered (with a great view of both players' 32" screens) to watch the excitement unfold.

Romão took Game 1 with his Blue-Black Control deck, his Jace, the Mind Sculptor overpowering Duke's mana-light draw. A timely Mana Leak from Duke in Game 2 took care of Jace, giving him a window to resolve a Grave Titan. Romão took the Titan with a Volition Reins, but Duke summoned a Jace of his own to get it back and ride it to a third game.

An Inquisition of Kozilek from Romão denied Duke an early Lotus Cobra, so both players settled into nice ol' game of draw-go. Romão was the first to make a move with a Jace, the Mind Sculptor, and Duke had to spend a pair of Mana Leaks to stop it. Grave Titans came and went on both sides of the table, but Romão was getting more damage through thanks to his Creeping Tar-Pits. Duke summoned another Titan, and when Romão took it with a Volition Reins, Duke had the Jace, the Mind Sculptor to bounce it back to his hand. Faced with an impending wall of Zombies, Romão put his head down and his Tar-Pits out in front of him. 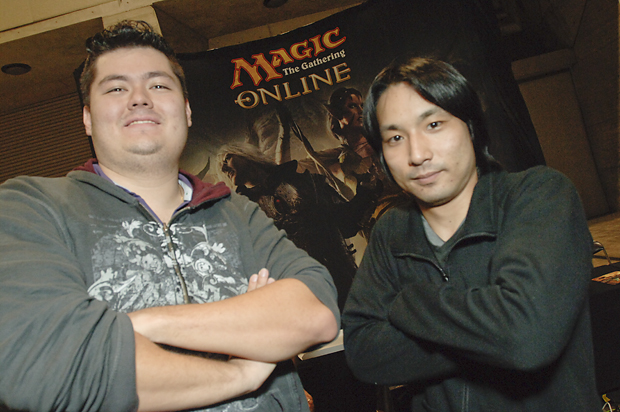 2 Avenger of Zendikar 1 All Is Dust 2 Gaea's Revenge