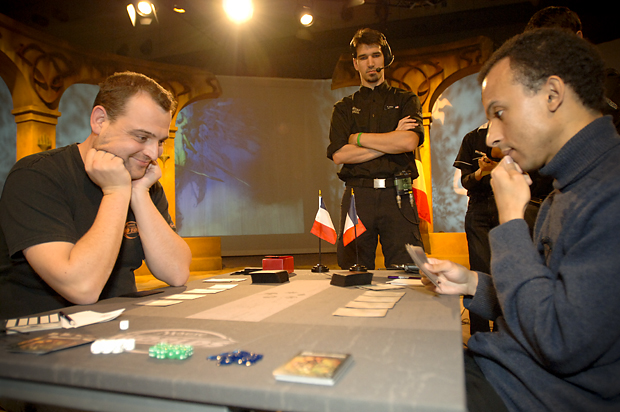 For Guillaume Matignon and former Pro Tour champion Guillaume Wafo-Tapa, this ultimate mirror match meant that for the first time ever the Magic World Champion would hail from France. Long one of the game's most successful nations, the two friends settled in for a good-natured battle, the pride of their nation no longer on the line as a French victory was assured.

Inquisition of Kozilek was the first spell cast in the last match of the 2010 World Championships, Wafo-Tapa using it to see his opponent's hand. With no legal targets for which to force his opponent to discard, however, the spell was a bit of an under performer. Matignon fired back with a Duress, seeing a hand from his opponent that had two copies of Preordain as its only non-land spells; he forced one to the graveyard.

A Sea Gate Oracle for Wafo-Tapa allowed him to put a tiny amount of pressure onto the board, but when he tapped low his opponent was able to resolve a Jace, the Mind Sculptor. That was bad news for the former Pro Tour champion but he promptly countered by casting his own copy of the mythic upon getting the turn back. The two traded Spreading Seas back and forth, Wafo-Tapa trying to keep his opponent from black mana while Matignon managed to sneak one on to a Tectonic Edge his opponent had been forced to tap.

Guillaume Matignon cast a Sea Gate Oracle, ending his opponent's attacks with his own copy of the 1/3. Trying a Grave Titan, Matignon seemed a bit surprised to see it resolve with no fight from his opponent. In addition to not countering the 6/6, Wafo-Tapa passed his very next turn without casting any spells leaving open the possibility he was short on action and that his opponent was going to begin running away with the game. 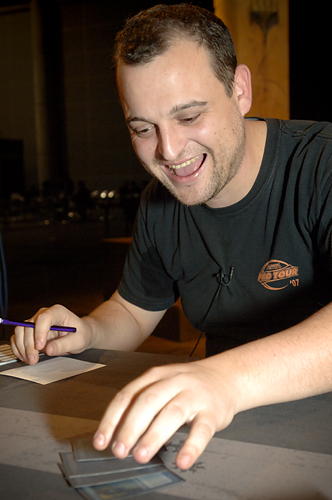 A friendly match ... with the Worlds title on the line.

The Titan and a team of Zombies went to the red zone, but a Consume the Meek from Wafo-Tapa killed the tokens and cleared the battlefield of Sea Gate Oracles. Post-combat Matignon cast a second Grave Titan and a single draw step after was all it took for Wafo-Tapa to concede the first game.

"You can put in the coverage," Guillaume Matignon pointed out as they shuffled for the second game, "that he is pondering whether to go first. I have more wins on the draw in the mirror match!"

Wafo-Tapa smiled at the comment but still opted to play first.

Matignon started on a mulligan but had the first spell of the game anyway, casting Inquisition of Kozilek on his first turn. The discard spell nabbed a Jace Beleren from his opponent, and both players spent a turn trading Preordains before settling into a rhythm of draw, go. Matignon tried to break serve by casting a flurry of discard spells, but they were stopped by his opponent via a flurry of counterspells. Unfortunately for Matignon, the sequence left him tapped too low to cast counterMagic and provided his opponent the opportunity to cast Inquisition of Kozilek himself. That paved the way for Wafo-Tapa to resolve Memoricide, permanently knocking Jace, the Mind Sculptor out of his opponent's deck. 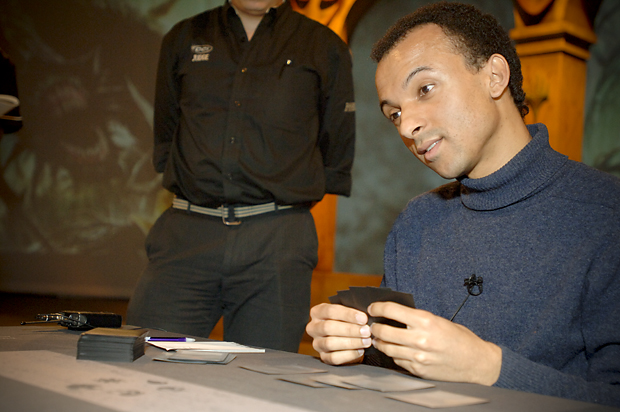 The real headline-grabber of the tournament: Guillaume Wafo-Tapa Cracks a Smile!

The turn of events was very bad for Guillaume Matignon, but a topdeck of Grave Titan would allow him to shrug it off. Shockingly, that was exactly the card he drew after the Memoricide! Matignon couldn't contain his glee, giggling while offering up an, "Oops!" to his opponent, who had played the turns better. The 6/6 began attacking with a team of Zombies a turn later and was joined by a Creeping Tar Pit and, shockingly, Wafo-Tapa found himself in an 0-2 hole after a lucky draw from his opponent!

Unable to afford any more losses, Guillaume Wafo-Tapa drew his opening seven for Game 3. He kept, keeping his stoic poker face clear of any emotion, while across the table Matignon mulliganed for the second game in a row. Inquisition of Kozilek for Wafo-Tapa nabbed a Preordain from his opponent's hand, but he simply cast a second to make up for the loss.

A Jace, the Mind Sculptor hit for Wafo-Tapa, but after fatesealing his opponent with its +2 ability he had it killed as Matignon cast his own copy of the planeswalker. Wafo-Tapa just fired back with a Jace Beleren and used a Tectonic Edge to lock his opponent out of access to black mana. That didn't stop Matignon from casting and resolving Sea Gate Oracle, but again he found himself tapped out on his opponent's turn. Yet again, Wafo-Tapa took advantage, casting a Grave Titan before passing.

It was finally Guillaume Matignon's turn to feel he was on the back foot in the match, but he attempted to catch back up by casting a Grave Titan of his own after digging in to some black mana. His opponent's Jace, however, had been the fount of too many extra cards and that allowed Wafo-Tapa to hold a lead over his opponent's creatures. He wound his Jace Beleren down to zero loyalty, casting Jace, the Mind Sculptor after doing so. That allowed him to bounce his opponent's Titan in order to begin attacking with his own. 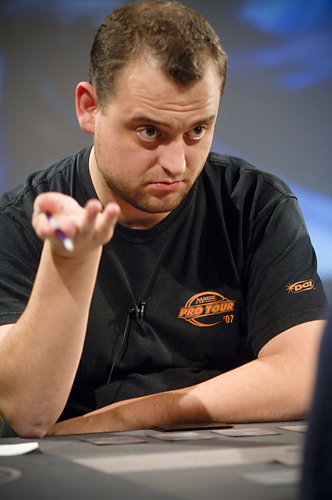 The match has its serious moments too.

Matignon recast his Titan, but had it bounced yet again on his opponent's turn, this time with a Memoricide to remove it for good. When he saw his opponent's copy of the sorcery, Matignon conceded to the superior board position, locked out of his marquee threat.

Feeling the tide of momentum in the match slowly turning in favor of his opponent, Guillaume Matignon kicked the fourth game off by trying to shift it back in his favor. He cast an Inquisition of Kozilek to force his opponent to discard Stoic Rebuttal; the only other non-land card in Wafo-Tapa's hand was Preordain. When Wafo-Tapa attempted to cast the cantrip, his opponent used Mana Leak to counter.

Matignon took a risk, casting Jace, the Mind Sculptor despite the fact his opponent had counter mana up. It paid off, however, as the planeswalker successfully resolved. Considering the right play for a moment, Matignon then decided to use the Jace to fateseal himself. Wafo-Tapa fired back with a copy of Jace himself, and his opponent clearly wasn't happy to lose his so quickly. He knew Wafo-Tapa had not had very many turns in which to draw the powerful spell thanks to the early Inquisition of Kozilek.

Wafo-Tapa looks for a way out.

A Jace Beleren for Wafo-Tapa was countered by Deprive from his opponent, who tried to fire back with a Memoricide on getting the turn back. The sorcery resolved, with Matignon naming "Grave Titan" and revealing that Wafo-Tapa was holding nothing but lands. Matignon wiggled in his seat, clearly happy at the turn of events, the taste of the title strong in his mouth.

Creeping Tar Pit for Matignon began going through the motions of putting an end to his countryman's run at the championship title. Wafo-Tapa fired back attacking with his own copy of the card, but Matignon then cast Duress to clear his opponent's hand of counters. When he found none there, Matignon cast Grave Titan, and his friend and countryman graciously extended his hand in defeat. 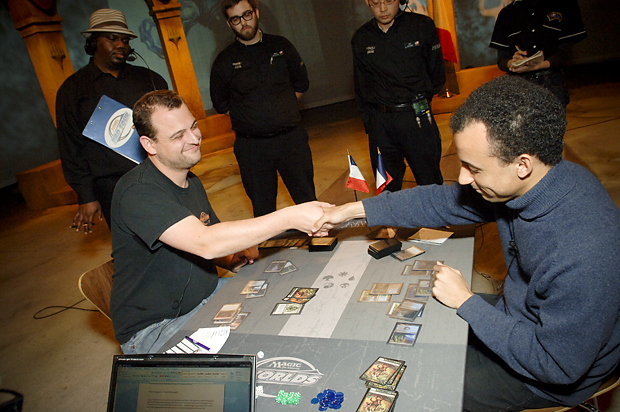 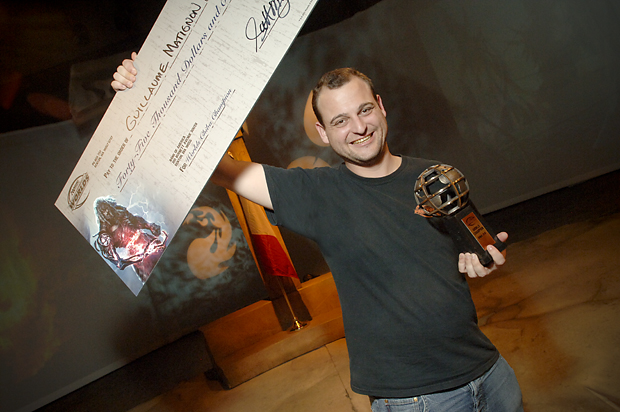