The Australian national team features Jeremy Neeman, Ian Wood, and Adam Witton. The trio is captained by Neeman, the top player in Australia at the moment after his Top 8 performance earlier this season at Pro Tour-San Juan. The 21-year-old student is the youngest of the team, but his success on the Pro Tour has given him the credibility of a veteran player and has helped steer the team to the Team Finals finish.

It is not Australia’s first brush with the Team Finals. The team led by Aaron Nicastri narrowly lost to the Americans in Memphis back in 2008. While this year’s team has stated they feel honored to represent their country, they do not feel extra pressure to make up from the previous team’s falter and are just happy to get to play on Sunday. Their opponents are a strong Slovak Republic team, and their lack of testing for the team formats may come back to haunt them. They consider their Extended matchup their strongest, and confess they have done almost zero Legacy testing.

Of course, strong support from their fellow Australians back home has helped make up for the lack of testing. They have received a significant outpouring of support from their countrymen, and got a boost from Danual Unwin in Melbourne, who built their decks for them. The cheers and messages will no doubt play a big role in helping them feel prepared to take on a tough cadre of opponents on Sunday. As for the prospect of winning? Headed by 32-year-old professional Magic player Robert Jurkovic, the Slovak Republic national team faces an upstart Australia team. Like their opponents, the Slovaks nearly tasted the Sunday stage as a team a half decade ago, also when the World Championships were in Japan. That team consisted of both Jurkovic and 25-year-old student Ivan Floch, who faltered late in the competition and missed their chance to add a trophy to their nation’s mantle. The third member of the team, the young Patrik Surab, is hoping to help propel his countrymen to victory where they once failed.

The three players have a secret weapon: Matej Zatlkaj. The Pro Tour—Berlin Top 8 alumni has been called their fourth member after spending the weekend working tirelessly to keep the team’s spirits up. He also spent his time between rounds scouting in an effort to make sure they entered each match fully prepared for their opponents. They won’t have Matej’s skills on Sunday, but his efforts as well as the other Slovak players in attendance have helped allow the team to succeed by making sure they never needed food, water, or moral support.

As for the matchups? The players feel their Legacy lineup is unwinnable, but feel confident they can win the Standard and Extended matchups. All three confess they did more testing for Scars of Mirrodin Limited than they did for the team portion, putting in hardly any time with their decks. That means they’ll need some help to pull off the win Sunday, but so far their lack of preparation hasn’t cost them much on the weekend! 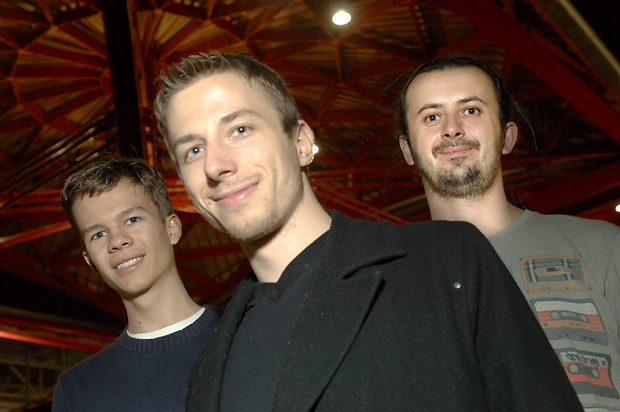