Love Janse and Christopher Wolf were the one match in the Top 8 devoid of any (as yet) big name players, so they were free to get their match under way without interference from the cameras.

Janse led with a Joraga Treespeaker, leveling it and summoning another. Wolf cranked up blew a Ratchet Bomb, severely stunting Janse's mana development before it could get out of hand. He continued to keep Janse at bay, using Jace, the Mind Sculptor to bounce a third Treespeaker. A Duress denied Janse a Summoning Trap, leaving a Primeval Titan, Avenger of Zendikar and Emrakul, the Aeons Torn, and giving Wolf the all-clear to summon a Grave Titan. Wolf's army quickly rumbled in for 10, and Jace sealed Janse's fate.

"You're really not nervous?" Wolf asked with a smile, as Janse mulliganed. The Swede could only shrug a little, impassively declining to answer. 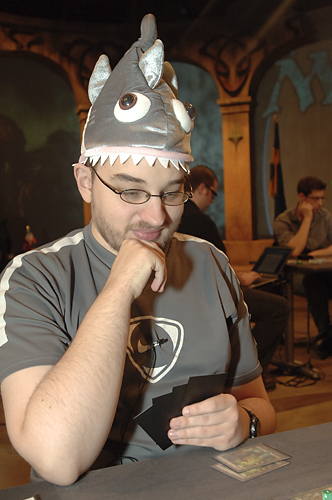 Love Janse isn't nervous. After all, he's got the Shark Hat of Victory.

While Wolf had managed to keep Janse confined in Game 1, the opposite was true in Game 2. Multiple Treespeakers helped Janse not only summon a Primeval Titan, but also pay for Wolf's Mana Leak, which was rapidly dropping in value as Janse's mana piled up. A Preordain found a Doom Blade to deal with the Titan, but the damage was already done, having fetched a Tectonic Edge and an Eye of Ugin. Wolf used an Edge of his own on the Eye, and then lost his Creeping Tar-Pit to Janse's.

Janse untapped, and leaned his head into his hands in thought. He then summoned a Terastodon, destroying three of his own lands. Wolf tried to dig up an answer with Jace Beleren, and passed the turn back. Janse surveyed the table, his elbows planted and his whiskered chin resting on his knuckles. With some prompting from the judge, Janse finally sent in his team. They all connected, dropping Wolf to 1 life. When Wolf's next card was not a haymaker, they were off to Game 3.

With a Doom Blade and a Mana Leak tying down Janse's mana, Wolf was free to summon a -four Jace, the Mind Sculptor and start sealing his opponent's fate with the +2 ability. Some more counter and removal spells later, Janse was spending the majority of his turns doing nothing while Jace's loyalty count continued to climb. Janse was finally able to keep an Oracle of Mul Daya on the table, revealing a Primeval Titan on top of his deck. Jace reached 12 loyalty to send the Titan packing, and it was replaced with an underwhelming Overgrown Battlement. Janse drew for the turn, the Oracle revealing Ulamog, the Infinite Gyre. 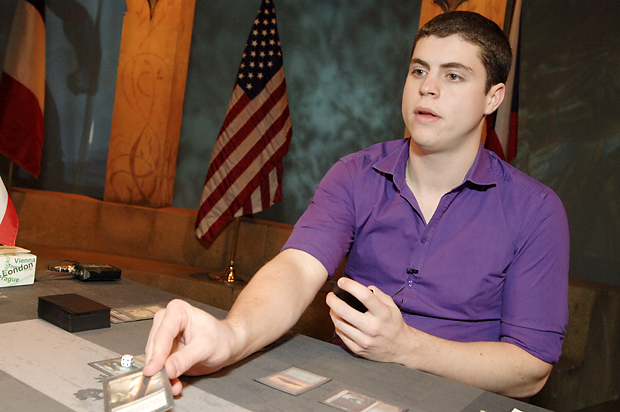 Wolf packs on the hurt with a well-timed Doom Blade.

"I'll ultimate you next turn," Wolf pointed out, gestured to his Creeping Tar-Pit as his blocker for the Oracle. Janse scooped up his cards with a shrug.

Janse Explored a Tectonic Edge on turn two. His third turn Oracle of Mul Daya met a Mana Leak, allowing him to cast a Summoning Trap for either a Primeval Titan or an Avenger of Zendikar. Janse chose the Titan, fetching a pair of Eldrazi Temples.

"That was a good one," Wolf admitted, drawing his card for the turn before sweeping them up.

Just in time for Game 5, the cameras rolled in to surround their match, revealing Janse with his traditional chin-on-knuckles state, while Wolf diligently shuffled.

Both players kept and Wolf led with a Preordain, following it up with a Doom Blade on Janse's Overgrown Battlement. Janse's third turn of "land, go" showed just how effective early mana denial can be against the Ramp deck. Janse continued to play lands, spending a Tectonic Edge on a Creeping Tar-Pit, then playing around Mana Leak with an Overflowing Chalice for one, and a turn later, a Joraga Treespeaker. 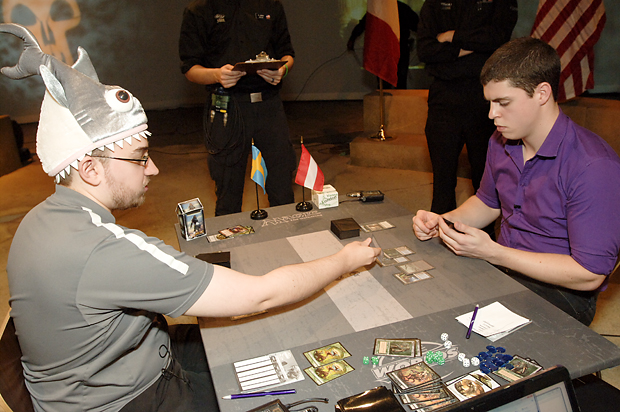 As you might guess, European fashion is a little different; in the U.S., nobody wears purple shirts.

Wolf had not been able to get above four lands, while Janse now had double that in play. The Swede played Eye of Ugin, and passed the turn back. Wolf opened his turn with a Duress, causing Janse to respond with a Summoning Trap. Mana Leak countered the Trap, and the Duress revealed two Primeval Titans and a Terastodon. Wolf spent his last mana on a Disfigure on the Treespeaker and shipped the turn back. Janse finally let himself smile as he summoned one of the Primeval Titans. As he picked up his deck to search, Wolf just shook his head with a smile, and offered the handshake.

Love Janse defeats Christopher Wolf 3-2 and advances to the Semifinals!