In the history of the Pro Tour, there has never been a French world champion. That's a surprising fact considering the reality that France has long been one of the most dominant nations on the tour, the home of Hall of Fame players like the Ruels and Raphael Levy. Guillaume Wafo-Tapa sat down to his Quarterfinals match at the 2010 World Championships in Chiba, Japan hoping to change that. Already a Pro Tour champion, Wafo-Tapa and his Blue-Black Control deck hoped to finally bring home a title for his native land. Standing in the way of that hope was his opponent, the Czech Republic's Lukas Jaklovsky. Playing the same deck, Lukas entered the match with the confidence of a player from a country that already owned one world title, awarded to Jakub Slemr in 1997.

Ratchet Bomb was the first spell of the match, resolving on the second turn for Jaklovsky as both players prepared to settle in for a long, drawn out match. Guillaume fired back with a Sea Gate Oracle while his opponent worked on charging up the Bomb. Echoing his French adversary, Lukas also cast a Sea Gate Oracle, the 1/3s staring each other down awkwardly from across the battlefield. 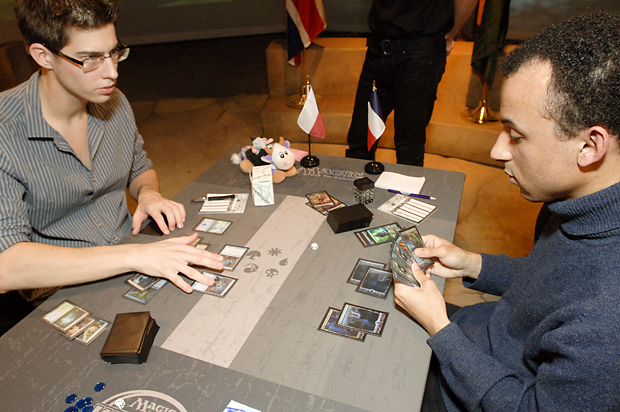 Lukas Jaklovsky of the Czech Republic has come a long way to be here, but he's still got to get through renowned French control player Guillaume Wafo-Tapa.

With both players tapping out each turn to cast spells, Wafo-Tapa found an opening in which to resolve a Jace, the Mind Sculptor, Jaklovsky unable to counter the powerful planeswalker. He used it to fateseal his opponent, but lost it as Lukas killed it directly by casting a Jace Beleren on his own turn. When the Czech player tried for his own copy of the blue card, however, he had his attempt stymied by Mana Leak. That was bad news for Lukas, as he was stuck on four lands and beginning to fall behind. How far behind? His opponent resolved a Grave Titan and began accruing an army of 2/2 Zombie tokens.

A second Jace, the Mind Sculptor hit for Lukas, successfully resolving and immediately returning Guillaume's Grave Titan to his hand. When Guillaume recast it, however, Lukas knew he had to dig furiously to find some type of answer. His Jace turned into a Brainstorm machine, but he didn't have a solution to the gigantic behemoth heading his way each turn and a surprisingly short first game ended in favor of France's Guillaume Wafo-Tapa.

The opening salvo in the second game featured Duress for Guillaume Wafo-Tapa which cleared the way for the Frenchman to cast a third-turn Jace Beleren. His opponent cast an Inquisition of Kozilek seeing a hand that featured three more copies of Jace in some form from the player who already had one on the battlefield. Jaklovsky's discard spell allowed him to freely resolve a Sea Gate Oracle and both players worked to ensure they hit their land drop each turn.

After losing his first Jace, of the Beleren variety, to a Sea Gate Oracle attack, Guillaume Wafo-Tapa cast a second. This time it was of the Mind Sculptor flavor, and he used it to begin fatesealing his opponent. Lukas worked on grinding down the planeswalker with his Oracle and managed to resolve a Memoricide. That permanently exiled his opponent's Grave Titans and after a Duress Guillaume found himself with only Jaces in his hand, spells he couldn't cast because of the copy he already had on the battlefield. That meant his opponent was in firm control of the game, but with active Jace the French player wasn't out of things entirely. 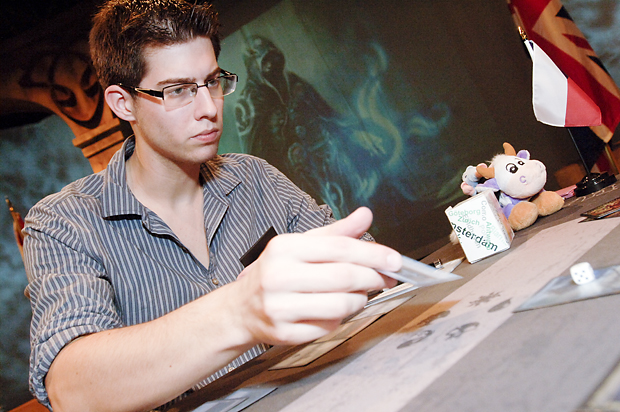 Jace began picking off Zombies while Tectonic Edge took care of the Tar Pit and when Guillaume felt his life total was safe, he switched modes to start locking up his opponent's draw step each turn with his planeswalker. By dictating which card Lukas got to draw, Wafo-Tapa prevented his opponent from casting anything relevant. That meant the loyalty count on the Frenchman's Jace began approaching lethal status; at 12 he would be able to go ultimate. To prevent that, Jaklovsky hoped for two action spells on the top of his library so that when his opponent moved one to the bottom of the deck he would be able to draw the other. When that didn't happen, the two headed to the third game with Guillaume one win away from advancing to the Semifinals.

In contrast to the pace of the first two games, the third started with little more than the occasional cantrip from the two competitors. The first "real" spell of the game came from Lukas Jaklovsky, who attempted a Jace Beleren with nearly a half dozen lands on the battlefield. Surprisingly his opponent allowed it to resolve, and Lukas used it to begin drawing extra cards. Wafo-Tapa attempted to take the planeswalker out with an attack from a Creeping Tar Pit but found his creature land destroyed by Tectonic Edge from his opponent.

Attempting to blow up his opponent's Jace by casting one of his own, Guillaume tapped three mana for Jace Beleren. His opponent was ready with Mana Leak and continued drawing an additional card each turn, and that gave him plenty of counters to use when Wafo-Tapa attempted a Memoricide. With the war over resolving the spell leaving the French player tapped out, Jaklovsky took advantage by casting Grave Titan. Guillaume cast an Inquisition of Kozilek in answer upon getting the turn back but after looking at his opponent's hand, he conceded to the 6/6 Giant and army of Zombies breathing down his neck.

With his back pressed tightly against the wall, Lukas Jaklovsky had managed to keep his hopes alive winning the third game of the match. He still had a struggle left, however, as they started the fourth and it didn't begin well for the Czech player: his opponent quickly resolved, and began using, Jace Beleren. A fourth-turn Memoricide for his opponent resolved unmolested and Guillaume Wafo-Tapa quickly named "Memoricide" as the target, removing all copies of the offending sorcery from his opponent's deck. 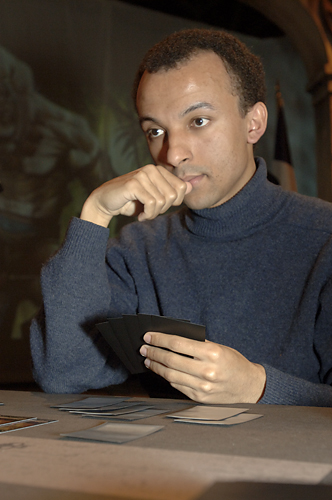 Little-known fact: The phrase 'cool as a cucumber' was originally invented to describe Wafo-Tapa's play style.

A Sea Gate Oracle for the French player allowed him to begin attacking, albeit meekly, and he used a Memoricide to force a Stoic Rebuttal out of his opponent's hand. A third copy of Memoricide for Wafo-Tapa was forced through with the help of Inquisition of Kozilek and when he named "Grave Titan" with it, Lukas conceded.