Guillaume Matignon entered the Top 8 of the 2010 World Championship with a chance to be Magic: The Gathering Player of the Year. If he won the whole thing, then the 25 Pro Points he'd receive, along with the 3 for his French National Team's sixth-place finish, would put him into a tie with the United States's Brad Nelson. That would result in a playoff at Pro Tour–Paris, but Matignon first had to fight through a power-packed Top 8. 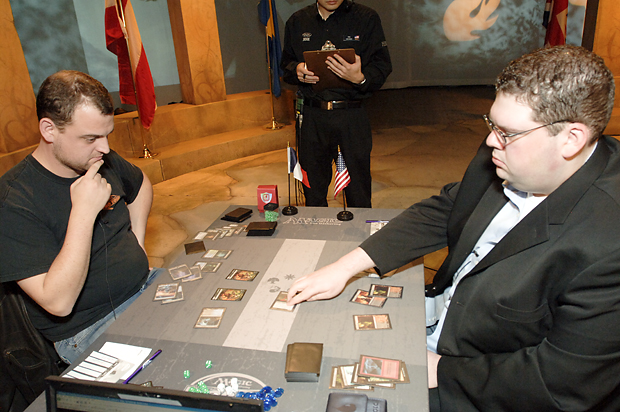 Eric Froehlich has been on the Pro Tour seemingly forever, and has an array of previous Grand Prix and Pro Tour Top 8s to his name. More relevantly for this matchup, he went 6-0 in the Standard portion of this year's Worlds, while Matignon managed just a 3-3 record. Matignon went undefeated in Scars of Mirrodin Draft (6-0) and Extended (4-0-2), but those are not the format for the Top 8.

On paper, Froehlich's Vampire deck is much faster than Matignon's Blue-Black Control, and it looks like the American's cheap creatures ought to roar out of the gate fast and furious. But Matignon started quickly with an opportune Inquisition of Kozilek, hitting a Vampire Lacerator. Then he used Spreading Seas to turn Froehlich's Swamp into an Island and Mana Leaked a Dark Tutelage, and it appeared that he had successfully stopped any chance of an early rush of Vampires. The first board-changing event was Matignon's Jace, the Mind Sculptor, which Froehlich answered with a second Dark Tutelage (this one resolved). 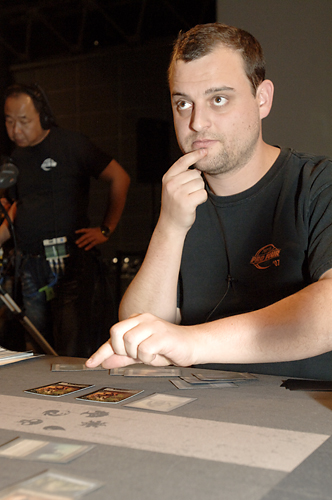 Matignon puts on his game face, or possibly his supervillain face.

The battle for card advantage (and card quality advantage) was on. Matignon cast a Sea Gate Oracle and Brainstormed with Jace before locking down a Blackcleave Cliffs with a second Spreading Seas. Froehlich's Dark Tutelage dinged him for 3 life as he drew another copy of Dark Tutelage itself. Undeterred, he cast it, still stuck on three lands (two of which had been turned into Islands), but at least drawing a lot of cards each turn.

Matignon was having no mana problems and cast a Grave Titan. Froehlich's Dark Tutelages pushed him down to 14, and he thought about his situation.

Froehlich conceded, and they moved on to the second game.

In the between-game chat, Froehlich described his experience coming back to Magic after a time away from the game. "Before I came back, everyone told me 'They're all bad, don't worry about it." How could they be bad? There's been MODO for ten years!" (That's an old-timey word for Magic Online.)

Froehlich started much better this time, with two Blackcleave Cliffs giving him an unobstructed path to a Bloodghast and Gatekeeper of Malakir. The Gatekeeper got Disfigured, but the Bloodghast was still a viable attacker. 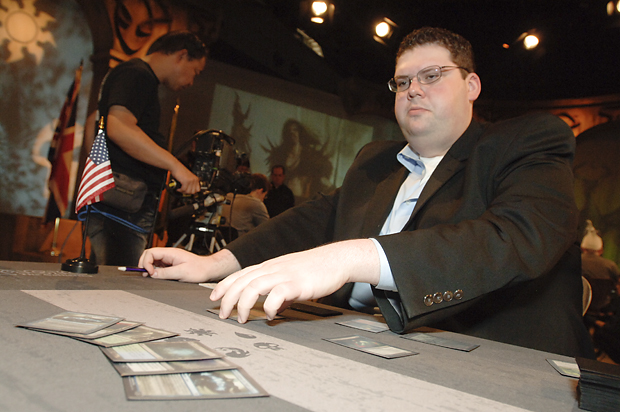 Point of interest: 'Froehlich' means 'cheerful' in German. Is Froehlich froehlich? You be the judge.

Because his lands this game were heavy on the Creeping Tar Pits (which enter the battlefield tapped), Matignon's Inquisition of Kozilek was delayed until turn three, and he used it to deal with Froehlich's Kalastria Highborn. Froehlich drew and cast another one when Matignon was at 14. The Spreading Seas Matignon used to turn off a Lavaclaw Reaches proved to be less impressive when his opponent had three other lands to deal with.

Matignon cast a Grave Titan, which fell victim to a Feast of Blood. Froehlich's Duress dealth with the threat of a Jace, the Mind Sculptor, and Matignon answered with a Duress of his own to get rid of a Lightning Bolt. But he wasn't pleased to see the Burst Lightning in Froehlich's hand, and had to trade a Zombie token to stop the Bloodghast from killing him. The presence of the Kalastria Highborn meant that the Bloodghast's death still stole 2 of Matignon's life, bringing him to 6. When his last card (a Mana Leak) was Duressed away, Matignon conceded the game.

Matignon took a mulligan and started with a Creeping Tar Pit. Froehlich answered witha Marsh Flats, which he's playing strictly for its Swamp-acquiring ability. Matignon started in improving his draws with Preordain on turn two.

Froehlich's Gatekeeper of Malakir got Disfigured, and his Blackcleave Cliffs got Spreading Seas-ed. He was still able to cast Dark Tutelage. Matignon went with Jace, the Mind Sculptor. The Dark Tutelage revealed another Dark Tutelage, and both players were clearly going to be drawing like Pros.

Froehlich Duressed away a Spreading Seas, leaving a Mana Leak in Matignon's hand. Vampire Nighthawk made the scene and Matignon put his head in his hands as he considered his situation. He used Jace, the Mind Sculptor to send the Vampire Nighthawk back to Froehlich's hand, and did not appear thrilled when Froehlich's Dark Tutelage revealed a Lightning Bolt. 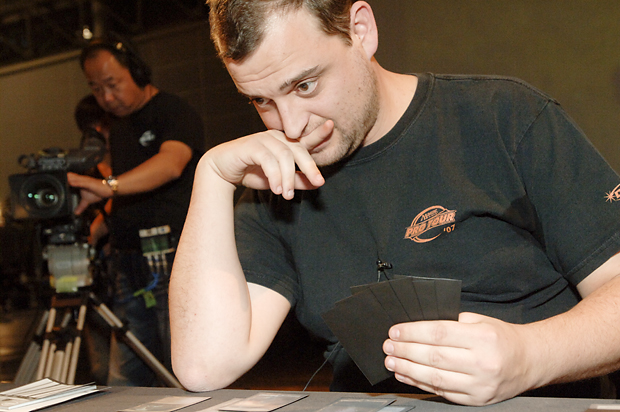 In Canada, allegedly, you put your finger under nose (and a hand on your head) to say 'Not it.' (It's disguising yourself, see?) But Matignon's French, so your guess is as good as ours.

Froehlich deliberately cast the Vampire Nighthawk into the Mana Leak that he knew about, and got the expected result, which was that both the Nighthawk and the Leak were gone. Matignon Jace-Brainstormed and cast a Grave Titan for some breathing room. Froehlich was at 15, thanks to the Marsh Flats and his own Dark Tutelage. He cast Burst Lightning on one of the Zombie tokens and untapped.

Froehlich went first and started strong with a Pulse Tracker. Matignon Preordained and went down to 18 life on the attack. Froehlich added a second Pulse Tracker to the mix (but not a land on his second turn), and Matignon cast a Ratchet Bomb to threaten the one-mana army.

Froehlich attacked Matignon down to 16 and cast Bloodghast to replace the doomed Pulse Trackers. They did indeed die, but Matignon was soon down to 12 life. Froehlich Duressed away a Consume the Meek, and Matignon Jace, the Mind Sculptored the Bloodghast back to Froehlich's hand.

Froehlich, still stuck on two land, replayed the Bloodghast. Matignon, at four land, used Jace to Brainstorm up some answers. After putting cards back on the top of his library, he used Sea Gate Oracle to move them to the bottom, and played a fifth land. 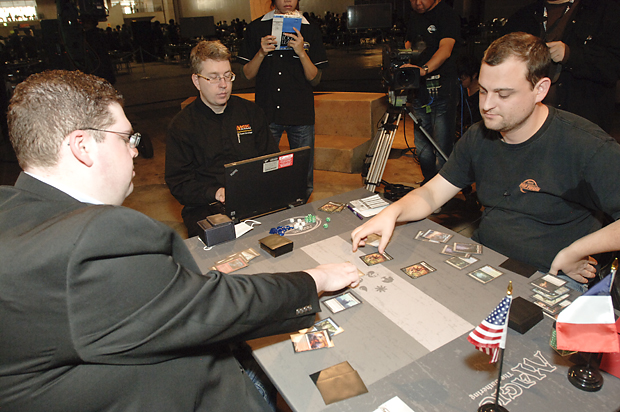 Froehlich got a third land and introduced Gatekeeper of Malakir, kicked to destroy the Sea Gate Oracle. But Matignon had a Mana Leak, and Froehlich slumped in his chair.

Matignon cruelly bounced the Bloodghast and cast Grave Titan. His Sea Gate Oracle, seeing no opposition, attacked for one, putting Froehlich at 19.

Froehlich's Vampire Nighthawk got bounced by Jace, removing the last loyalty counter at last. An all-out attack followed by a second Grave Titan made Froehlich extend a hand in congratulations.

Guillaume Matignon defeats Eric Froehlich 3-1 and advances to the Semifinals!