2010 Magic: The Gathering World Championships - Rookie of the Year

Rookie of the Year – Andrea Giarola

The Rookie of the Year contest was an unusually hot one in 2010. After his Top 4 at Pro Tour–San Juan, Italian Andrea Giarola had a solid lead headed into the 2010 World Championships in Chiba, Japan. What Andrea, and the rest of the world, hadn't counted on, however, was the plucky Swede Love Janse. The shark-hat-adorned Janse ripped off an impressive win streak to find himself in his first Pro Tour Top 8 at his very first Pro Tour!

Love made it past the Quarterfinals on his way to potentially locking up the title by making the Finals. Unfortunately for the young Swedish player, a Guillaume Wafo-Tapa–sized wall stood in his way. The French star put an end to Janse's run and ensured Andrea would hold onto his lead to become the 2010 Rookie of the Year.

Andrea Giarola is an 18-year-old student who hails from Milan, Italy. Citing his Top 4 performance in San Juan and a Top 8 at the 2010 Italian National Championships, Andrea was clearly happy to have locked up the title. Giarola, who began playing back in Darksteel, had a lot of people to thank for getting him to the top spot.

"I'd like to thank all of the players in Italy!" he said as he hoisted his trophy for the first time on the Sunday stage. 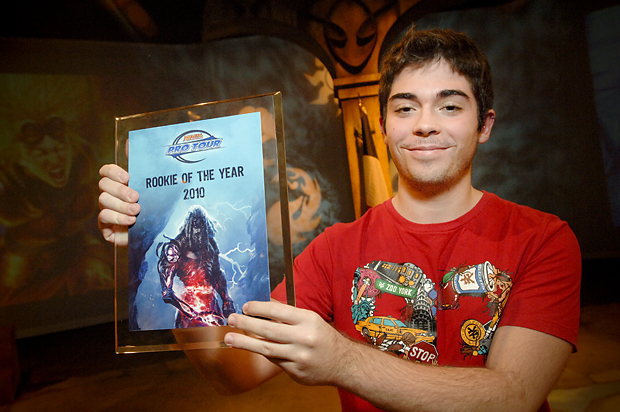 Andrea Giarola of Italy is the 2010 Rookie of the Year!