2010 Magic: The Gathering World Championships Round 1: Consulting the Oracle

With the 2010 World Championships in his backyard, it was no surprise to anyone to see Shuhei Nakamura sitting down to battle for the first round in Chiba, Japan. The former Player of the Year is one of the nation's (and game's) all-time greats. Of course, his opponent for the round wasn't exactly a slouch: France's Guillaume Wafo-Tapa. A member of multiple Pro Tour Top 8s, Guillaume's presence at the match ensured the first feature match of the 2010 World Championships would be a doozy. 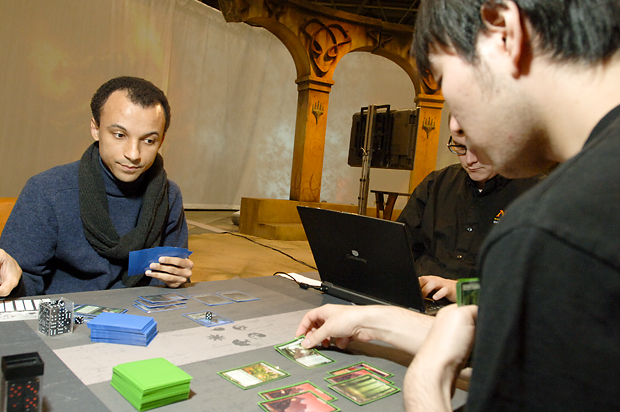 Wafo-Tapa opened on Preordain, followed by Duress. It was a good start for his blue-black control deck, particularly powerful against his opponent's red-green Valakut Ramp build. Shuhei lost Cultivate to his opponent's discard spell and found his early game stunted as he could only muster an Overgrown Battlement for acceleration. Meanwhile his opponent was busy using a Jace Beleren to put himself up in the card count, another chapter in the well-attested love of control decks and card advantage that has defined Guillaume's career on the Pro Tour.

A second Overgrown Battlement hit the battlefield for Shuhei but drew a Doom Blade from his opponent, killing it. The loss of his mana accelerant wasn't enough to prevent Shuhei from landing an Avenger of Zendikar the following turn, however, and Guillaume found himself staring down a 5/5 and a field of Plant tokens. Consume the Meek dealt with the 0/1s, but the Frenchman still had to take 5-point hits from his opponent's Avenger. To make matters worse, a Valakut, the Molten Pinnacle that Shuhei had played in the early game had been joined by five Mountains, meaning the land was about to begin Lightning Bolting Guillaume each time the Japanese player drew and played a Mountain.

Wafo-Tapa solved the Valakut, the Molten Pinnacle riddle by using Tectonic Edge on the land, but still hadn't come up with a solution for Avenger of Zendikar. He cast Spreading Seas and a Preordain to help dig, and the cantrips paid off as Grave Titan made its way to the battlefield for the blue-black Control player. The 2/2 Zombies provided a strong force for blocking the Avenger, and because his Titan was 6/6, Guillaume had no fear of attacking with it.

Shuhei fired back with a second copy of Avenger of Zendikar, using a fetch land to make his Plant tokens into 2/3s thanks to double landfall triggers from having two copies of the 5/5 on the battlefield. Grave Titan crashed into three of the tokens, yielding Guillaume more Zombies and dying, but he reloaded with a second copy of the 6/6 following combat. Nakamura found more land drops, turning his 2/3 Plants into 4/5 Plants, and continued to keep his opponent under the gun.

The double Avenger proved too much for Guillaume. He tried to dig deeper into his deck to find a solution with Sea Gate Oracle, but none was forthcoming, and the players moved to the second game with Shuhei in the lead.

Duress led the way for Guillaume Wafo-Tapa again in the second, binning a Koth of the Hammer from his opponent's hand. The discard spell had revealed two copies of Summoning Trap in Shuhei's grip, so a fourth-turn Memoricide from Guillaume not only removed the troublesome instant from his opponent's library, but also served as a Mind Rot nabbing the two copies Shuhei had been holding. A second copy of the sorcery a few turns later removed Shuhei's library of four Primeval Titan and the pace of the second game was firmly in favor of Guillaume's deck. 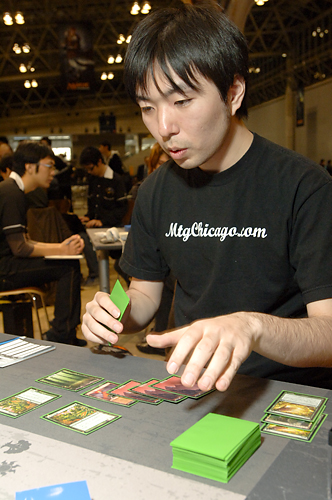 Using Jace Beleren to put himself ahead in the card count, Guillaume found himself the counterspells he needed to stop his opponent's most powerful spells. When Shuhei attempted an Avenger of Zendikar? Flashfreeze was ready to stop the 5/5. Guillaume cast Grave Titan to give himself a win condition, and when he found himself without a hard counter for an Artisan of Kozilek out of Nakamura, he had Doom Blade ready for Avenger of Zendikar being returned to the battlefield by the Eldrazi. A second copy of Doom Blade took out the 10/9, and Shuhei had only a clutter of 0/1 Plant tokens with which to block his opponent's Titan.

Valakut, the Molten Pinnacle hit for Nakamura, who had been sandbagging two copies of Khalni Heart Expedition with three counters on them. He immediately used one to deal 6 to the Titan by sacrificing it to find two Mountains, but found his opponent continuing to pressure him with the 2/2 Zombie tokens it had generated. When a pair of Creeping Tar Pits joined in on the fun, Shuhei found himself out of a game 2 he was never really in to begin with.

Duress made an appearance for the third straight game for Guillaume Wafo-Tapa, but unfortunately for the French player the sorcery found his opponent's hand lacking any legal targets. Shuhei's first spell, a fourth-turn Oracle of Mul Daya, was countered with Mana Leak. Jace, the Mind Sculptor entered the battlefield for Team Guillaume, but the Frenchman seemed hesitant about the fact he had to pass back to Shuhei with no access to mana for casting counterspells. Nakamura was unable to take advantage, however, simply playing a land and passing back to his Jace-wielding opponent.

A turn after casting his planeswalker, Guillaume used a Memoricide to make sure his opponent's Primeval Titans left the game for good. That left him tapped out again, however, and Shuhei finally found a means of capitalizing by casting Koth of the Hammer, then using it to turn a Mountain into an attacker. The 4/4 land bashed Jace down to a single loyalty before being shut down by a Grave Titan from Wafo-Tapa. 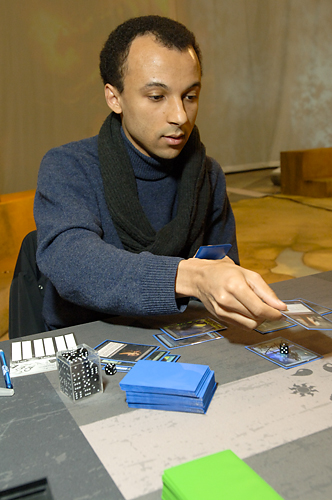 Guillaume Wafo-Tapa wears a scarf, plays control, and wins at Magic. What else is new?

With his opponent again tapped out, this time from casting Grave Titan, Shuhei Nakamura worked to put himself ahead enough to win. He cast Artisan of Kozilek, returning an Oracle of Mul Daya from his graveyard and playing a bonus land for the turn from the top of his library. The Artisan was soon dead from a Doom Blade, and Nakamura found his life total under assault from his opponent's Grave Titan. He attempted to work his Oracle in order to play enough extra cards from the top of his library to dig into some help, but when he kept turning up lands he conceded the match to his opponent.

3 Oracle of Mul Daya 2 Koth of the Hammer

4 Valakut, the Molten Pinnacle 4 Avenger of Zendikar 2 Koth of the Hammer
75 Cards