Josh Utter-Leyton is here representing the United States of America as its national champion, an honor he earned in Minneapolis this year. Gerry Thompson is representing himself, but he’s no stranger to the spotlight. His eight Grand Prix Top 8s and two wins mark him as a dangerous competitor in anyone’s eyes.

Utter-Leyton’s first nonland contribution to the game was a Gold Myr. Thompson’s Plague Stinger was more menacing, and it flew over Utter-Leyton’s Chrome Steed to deliver one poison counter. It was joined by an Ichorclaw Myr, and it was clearly time for Utter-Leyton to step on the accelerator. 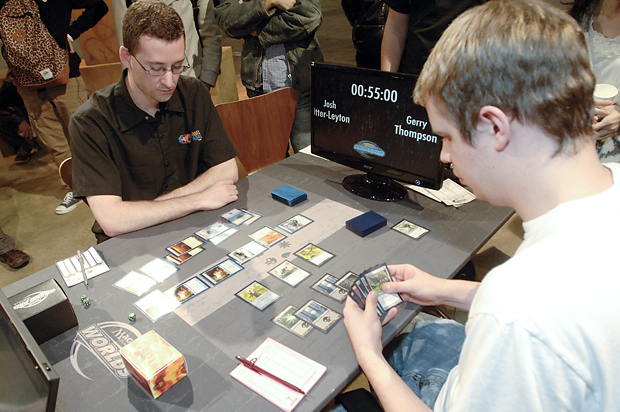 And the accelerator is exactly what he did step on, playing out a Trinket Mage, then the Flight Spellbomb it fetched, then a Glint Hawk to bounce the Flight Spellbomb back to his hand. And the Chrome Steed got in for 4, as Thompson stuck with his aggressive plan and chose not to block.

On his own turn, though, Thompson slowed things down a bit. His only attacker was Ichorclaw Myr (giving Utter-Leyton a second poison counter), and he cast Blackcleave Goblin after his attack, clearly deeming it a better blocker than hasty attacker.

Utter-Leyton, pleased with the success of Trinket Mage in his previous turn, played another one, this time getting an Origin Spellbomb. The Chrome Steed attacked, but shrunk to the tune of two -1/-1 counters when Blackcleave Goblin did its duty and died to save Thompson. The Glint Hawk was also attacking, and Thompson fell to 14.

On Thompson’s turn, he was unable to increase his army in numbers, so he chose to increase its size. He played a Sylvok Lifestaff and equipped it on Ichorclaw Myr, which attacked and gave Utter-Leyton two more poison counters. Thompson moved the Sylvok Lifestaff to his Plague Stinger and readied himself for the inevitable attack. 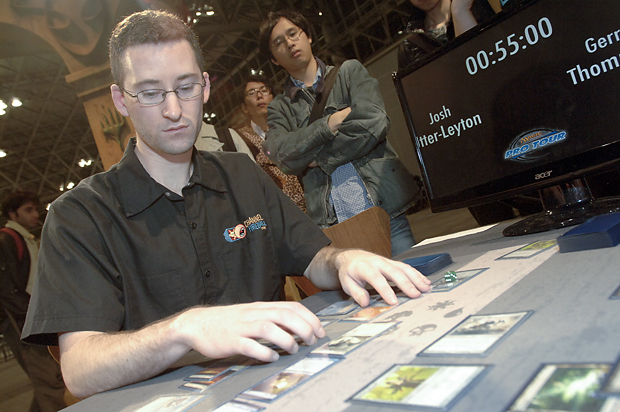 Josh surveys a sticky board state.

At this point, Utter-Leyton had both Flight Spellbomb and Origin Spellbomb, two Trinket Mages, Glint Hawk, Chrome Steed (with two -1/-1), and Gold Myr. He added a Glimmerpoint Stag to exile Thompson’s lone potential blocker and attacked with everything. Thompson was now at 6, and had to cast blockers. He had a Plague Stinger and a Leaden Myr, but when Utter-Leyton cast True Conviction, he decided the game was as good as lost and started to shuffle up for the next game.

Thompson told Utter-Leyton to play first, but he may not have been entirely ready for how quickly his opponent was going to come out of the gate. The very first card of the game was Memnite, and it had attacked for 1 and been joined by Glint Hawk Idol before Thompson got an Ichorclaw Myr onto the table.

Thompson didn’t block the next attack, which included a Glint Hawk Idol that had been animated by the appearance of Origin Spellbomb. His counterattack meant that Utter-Leyton had one poison counter, and the newly summoned Plague Stinger threatened more.

Utter-Leyton cashed his Origin Spellbomb for a Myr token and attacked with it in conjunction with Memnite and the Glint Hawk Idol. Thompson again declined to block and consequently fell to 12.

Thompson’s attack with Ichorclaw Myr and Plague Stinger gave Utter-Leyton two more poison counters. Thompson used Instill Infection on the Memnite and shed not a tear for the death of the noble zero-mana 1/1. To be fair, Utter-Leyton also appeared to be relatively unaffected by the Memnite’s death, as he just went on with his life, casting Origin Spellbomb and attacking with everything, leaving Thompson at 7. Utter-Leyton added a Ghalma’s Warden, which was fat with menace and metalcraft. 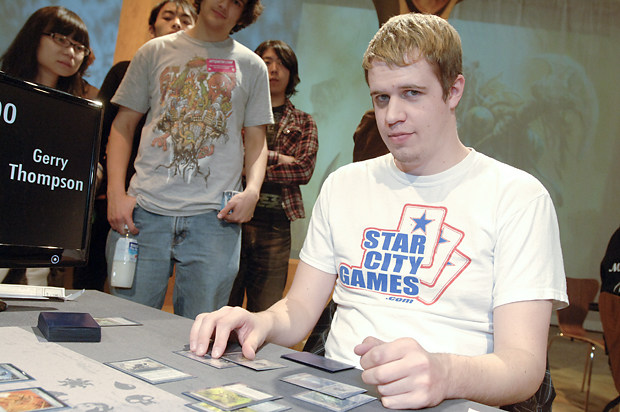 Thompson had to go on the defense and decided not to attack. He cast a Mimic Vat and a Sylvok Lifestaff, the latter of which he affixed to Plague Stinger.

As it was, however, Thompson moved the Sylvok Lifestaff onto Ichorclaw Myr and passed the turn, and Utter-Leyton bounced the Myr with Lumengrid Drake and launched a massive attack.

All Thompson could say was, “Rats!”