Both these players sat down for the second round of the second draft with an 8-1 record. Steven Tan had drafted a very solid green-black infect deck and was looking to kick off draft two on a high note. Paulo Vitor Damo Da Rosa likely had more than winning Round 10 on his mind. He has the Player of the Year race to think about as a Top 8 finish at Worlds would give him a shot of taking the title.

Damo da Rosa won the die roll and chose to play, and both players kept their opening hands. 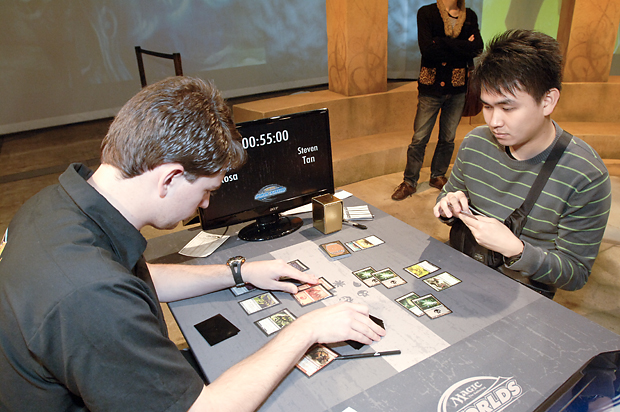 Damo da Rosa led things off with a Spikeshot Elder, and Tan played a land and passed. Damo da Rosa played his second land and attacked Tan down to 19 before he passed the turn. Tan's first spell of the match was a Necropede, while Damo da Rosa threatened an aerial assault with Necrogen Scudder, bringing his life total to 17. Tan attacked with Necropede to give Damo da Rosa his first poison counter of the match. Tan followed this with a land and Culling Dais.

Damo da Rosa took to the air with his Scudder and Elder, taking Tan down to 17. Damo da Rosa added Leaden Myr and Nihil Spellbomb to the battlefield. At the end of Damo da Rosa's turn, Tan sacrificed the Necropede to Culling Dais, getting rid of the Spikeshot Elder then cashed in the Dais for a card. Tan laid his fourth land and played both a Plague Stinger and a Blight Mamba. Damo da Rosa continued his attacks with Necrogen Scudder, bringing Tan down to 10 life, then payed three mana for Snapsail Glider. Tan dropped an Accorder's Shield onto his Stinger and attacked with it and Blight Mamba. Damo da Rosa blocked the Mamba with his Glider and gained a second poison counter while Tan regenerated his Snake.

Painsmith joined Damo da Rosa's team and a Contagion Clasp both pumped his Scudder and killed Tan's Blight Mamba. An attack from the Scudder dropped Tan to 5 life, but Tan could only respond with an attack with his Plague Stinger. Damo da Rosa all but dealt the killing blow when Kuldotha Phoenix made its way onto the battlefield. Tan was forced to chump block with his Stinger, and after a sacrificed Horizon Spellbomb came up with nothing we were on to Game 2.

Tan kicked off Game 2 with a turn-one Fume Spitter. No play from Damo da Rosa meant that Fume Spitter would bring his life total down to nineteen. Tan added Ezuri's Archers to his forces. Darksteel Axe hit the battlefield for Damo da Rosa but did nothing to stop Tan from attacking. Damo da Rosa went down to 17 life while Tan cast Contagious Nim. Damo da Rosa revealed a bit of his sideboard plan when he played Blistergrub on turn three. Tan attacked with Archers, Spitter and the Nim. Blistergrub traded with the infectious creature, and the life totals stood 18 to 16 in Tan's favor. Corpse Cur returned the Nim back to Tan's hand before he passed the turn back. 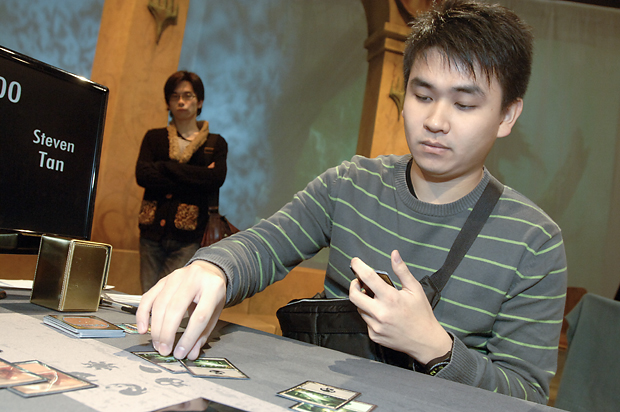 Damo da Rosa took the opportunity to kill the Plague Stinger while Tan was tapped out. Tan hit Damo da Rosa for a third poison counter and was joined on the battlefield by Blight Mamba and Culling Dais. Damo da Rosa used five mana for Kuldotha Phoenix but chose not to attack. Tan attacked with an Insect token and the Mamba. Damo da Rosa blocked with Snapsail Glider and Kuldotha Phoenix. Tan had six mana available but did not regenerate his Snake. The reason became apparent as Tan cast Geth, Lord of the Vault. 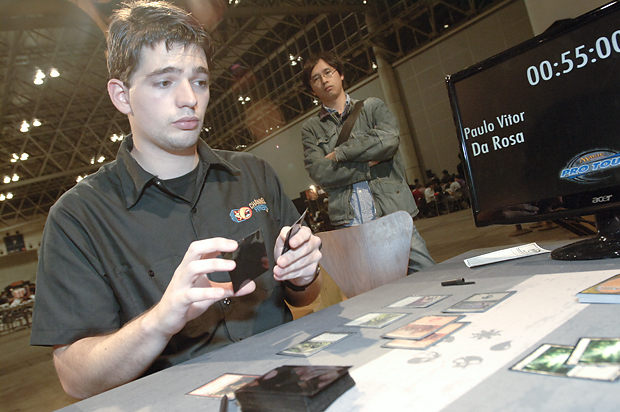 Damo da Rosa knew he needed to deal with Geth at any cost. That cost turned out to be a Grasp of Darkness along with an Elder activation. Damo da Rosa could now equip Spikeshot Elder with Darksteel Axe. This combination was too powerful for Tan's infect creatures to fight through. Steven Tan extended the hand, and Paulo Vitor Damo Da Rosa moved on to 9-1.