Coming into the first round of individual competition on Saturday, both Paulo Vitor Damo da Rosa and Guillaume Wafo-Tapa were sitting comfortably on 10-2. With six rounds to go, they both realistically had wiggle room for a couple of losses, but not more than that. With that in mind, both players had apparently opted to field strategically similar decks. In this case, Five-Color Control. You’ll have to bear with me, because the grueling nature of this control-on-control battle does not lend itself to a detailed play by play.

Damo da Rosa rolled well to start the game, but Wafo-Tapa trumped his 10 with an 11, and rushed a main phase Esper Charm through while only one of Damo da Rosa’s lands were untapped. Five-Color Control decks being notably mana hungry, keeping up a continuous flow of extra card is important to the deck, and especially important in the mirror. 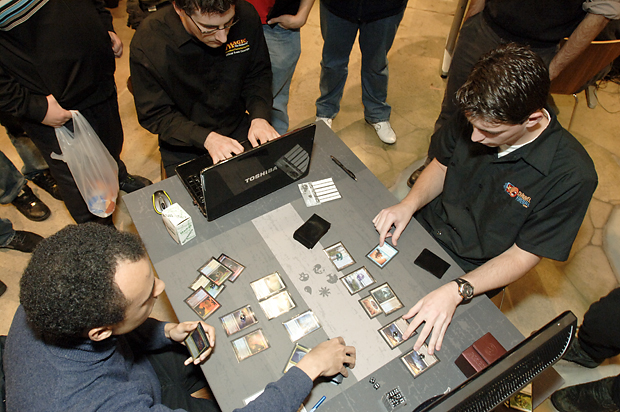 A few turns later, Wafo-Tapa landed a Jace, the Mind Sculptor, after baiting Damo da Rosa with a Cryptic Command during his end of turn step. The players traded Jaces for a few turns, but Wafo-Tapa had drawn three of them to Damo da Rosa’s two, and after checking the top of his deck once, to take the planeswalker out of Lightning Bolt range, he Brainstormed repeatedly, until Damo da Rosa was but a speck of dust in his rear view mirror. From there, he began fatesealing Damo da Rosa to ensure he wasn’t going to find a way back into the game. 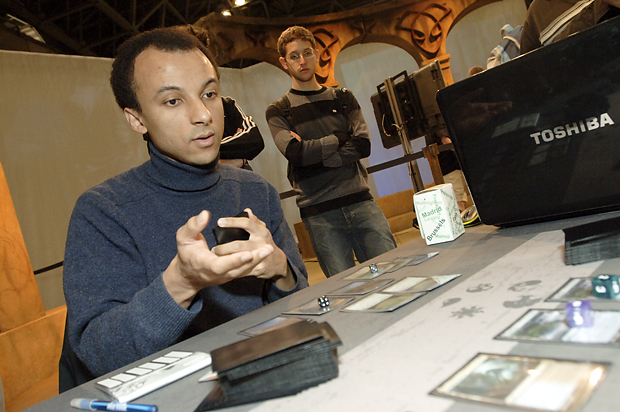 As Jace neared his Ultimate, Damo da Rosa finally summoned a Wurmcoil Engine, and after a Volcanic Fallout during Wafo-Tapa’s upkeep, and another later in his turn, the board was suddenly clear of the many copies of Wall of Omens that had congregated around the middle of the table. The Engine dropped Jace to 5 loyalty, but Jace simply bounced it during Wafo-Tapa’s turn, who followed it up with a Cruel Ultimatum with Cryptic Command back up, to clear out Damo da Rosa’s hand. Wafo-Tapa then summoned a Sunblast Angel and started attacking. A few turns later, they were done with Game 1 ....

...Which had taken nearly 28 of the 50 minutes allocated to a round, and as they sideboarded, Damo da Rosa set a timer on his trademarked trusty timepiece with a frown. 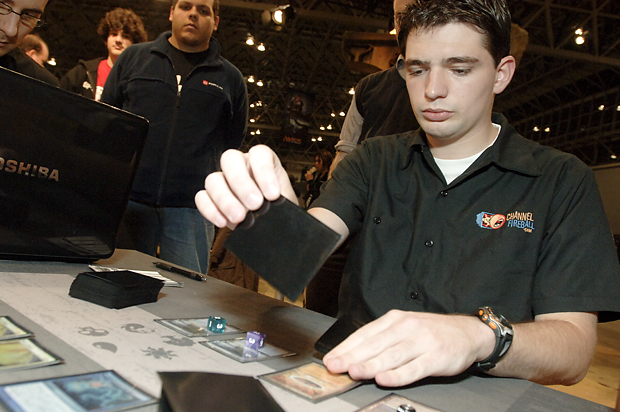 Paulo Vitor keeps an eye on the clock.

As they shuffled quickly for a third game, Wafo-Tapa asked how much time was left. When the answer returned an improbably small figure, both players shook hands with a shrug and a smile.