2010 Magic: The Gathering World Championships Round 14: A Floozie with an Oozie

Christopher Wolf's first feature match ever was in Round 9 of this very tournament. And here he is again! He's sitting at third in the standings after thirteen rounds. His opponent, Eric Froehlich, is at the top, although they have identical 11-2 records.

Wolf started with a Vivid Marsh and a Sunken Ruins before casting a Wall of Omens and sitting back in his chair. Froehlich contented himself with playing lands for the first few turns, since Wolf didn't appear to be in any hurry. 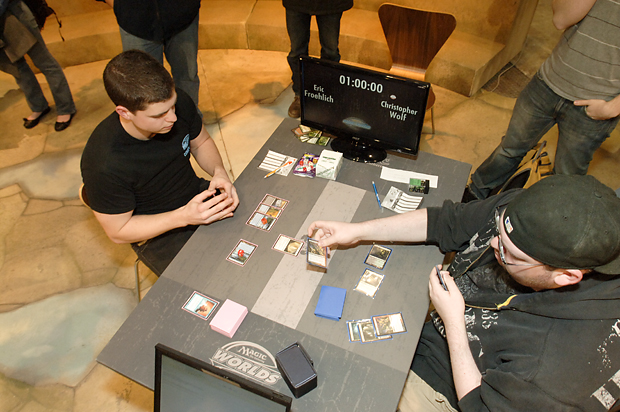 Froehlich's first play was a Fulminator Mage that got Mana Leaked, after which Wolf played his third Vivid land of the game. A second Fulminator Mage hit the board and killed a Vivid Creek, but not before Wolf used its mana to draw cards with Esper Charm. Froehlich Thoughtseized away a Path to Exile, leaving Cruel Ultimatum.

The Ooze killed a Vivid Meadow with the Fulminator Mage's ability and took up residence in Froehlich's graveyard. Another Necrotiz Ooze was cast and sacrificed for the same effect. Froehlich cast Acidic Slime to destroy Cascade Bluffs. Reveillark brought back both Fulminator Mages, which promptly sacrificed themselves to destroy Vivid Marsh and Vivid Creek.

Wolf cast Volcanic Fallout to deal with the Acidic Slime.

Froehlich asked how many cards Wolf was holding, and decided that "four" was a safe answer. He cast Thornling, and it was not countered. The next turn, it attacked, killing a Wall of Omens. Primal Command dealt with a Reflecting Pool temporarily, and once it was back, Froehlich used a new Acidic Slime to kill it. The Thornling killed Wolf's remaining Wall of Omens, and Wolf was down to six lands and no creatures.

A Froehlich Tectonic Edge reduced that to five lands, but it was still enough to Cryptic Command the Thornling back to Froehlich's hand after he'd used too much mana to recast it. The Acidic Slime still got in there, though, and it was joined by a Devoted Druid.

Wolf looked through his graveyard, possibly checking on how many lands he'd gone through and wondering if he'd ever have enough mana for the Cruel Ultimatum. Froehlich used a Makeshift Mannequin to bring back an Acidic Slime and kept Wolf's lands-in-play count down to five. When the creatures kept coming, Wolf had had enough.

Wolf chose to go first and led with a Vivid Creek. Since it entered the battlefield tapped, he had no way to stop Froehlich's first-turn Thoughtseize, which stripped an Esper Charm. Froehlich allowed a Mana Leak to stay, so he wasn't surprised when his turn-two Devoted Druid didn't resolve. On the third turn, Froehlich kept up the pressure on Wolf's hand, Duressing a Path to Exile away and leaving two Cryptic Commands. 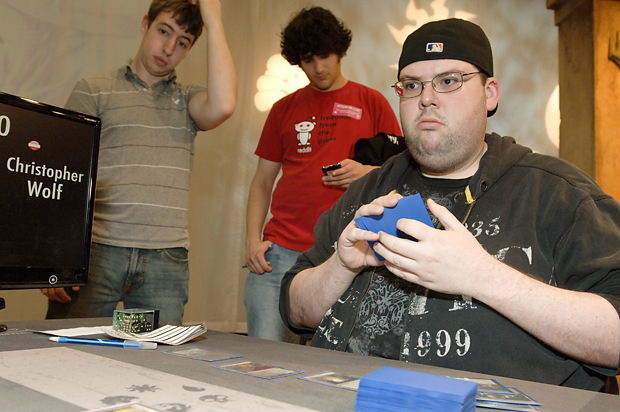 Froehlich's fourth-turn Necrotic Ooze got in for 4 on turn five, after which Froehlich tried a Fulminator Mage. Wolf thought about his options and decided to counter it and draw a card. The next turn, the Ooze again attacked (it is, after all, a 4/3) and Froehlich used Tectonic Edge to reduce Wolf's array of Vivid lands by one. At the end of Froehlich's turn, Wolf bounced the Necrotic Ooze with the second Cryptic Command that Froehlich had seen. But when Froehlich, on his next turn, tried a Primal Command, it turned out that Wold had one more Cryptic Command available.

Wolf played a land that could do more that "just" give him any land he wanted, but the Celestial Colonnade fell victim to a Fulminator Mage. A pair of Esper Charms refilled Wolf's hand, but he didn't counter Froehlich's Necrotic Ooze when he replayed it. Instead, he hit it with Path to Exile. Froehlich used the Fulminator Mage's borrowed ability to kill a land and get the Necrotic Ooze into the graveyard instead of losing it to the exile zone.

Both players had an impressive assortment of land, but Froehlich didn't have enough mana to force his Acidic Slime through Mana Leak. Wolf got a Wall of Omens out, then, on Froehlich's Upkeep, cast Vendilion Clique. He saw Fulminator Mage, Birds of Paradise, and Twisted Mire. After a bit of thought, he decided not to make Froehlich trade either of those cards away. Froehlich played the Mage, but saved the Birds of Paradise for the next turn.

Froehlich led off and got a Fauna Shaman on the table before Wolf's Vivid Meadow had even untapped. Wolf waited until Froehlich's Upkeep before sending the Elf on a Path to Exile, and Froehlich used his turn to not only replace the Fauna Shaman but play a Tectonic Edge to threaten Wolf's five-color land base. By waiting until Froehlich's Upkeep, Wolf kept his opponent from using the land that turn, since Path to Exile gives a land that's tapped.

Froehlich tried an Acidic Slime,to whittle down Wolf's four lands, but it got Mana Leaked. His Tectonic Edge took out a Vivid Meadow, but Wolf Esper Charmed himself a couple of cards. 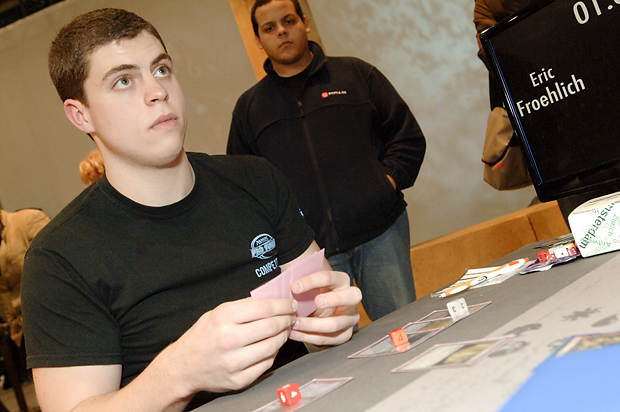 The new Fulminator Mage hit the table and destroyed a Vivid Creek. But the Vivid Creek gave Wolf the mana for a Vendilion Clique, and Froehlich had to reveal Necrotic Ooze, Murmuring Bosk, Fauna Shaman, and Makeshift Mannequin. The Mannequin went away.

Wolf attacked with his Vendilion Clique, and Froehlich disposed of his superfluous Fauna Shaman for a Devoted Druid. He played the Necrotic Ooze, using all of his mana. Wolf Esper Charmed to get two cards, leaving two lands untapped, but if he had a Mana Leak, he did not use it.

Froehlich passed the turn and read Necrotic Ooze. He asked a judge how much time was left, and the answer was nine minutes, forty seconds. Froehlich sent the Devoted Druid in his hand away and replaced it with a Molten-Tail Masticore. Wolf took a moment to glance at the Quillspike in Froehlich's graveyard.

Wolf slumped in his chair, because he knew the end was near. Froehlich tapped the Necrotic Ooze to add

Armed with an arbitrarily large Necrotic Ooze, Froehlich now discarded Molten-Tail Masticore to get a Thornling. He used the Masticore's ability to deal four damage to Wolf's lone Wall of Omens, and sent the Necrotic Ooze across for a win.