2010 Magic: The Gathering World Championships Round 15: Shifting into Gear

Yong Han Choo was fairly unknown prior to PT–Hollywood where he had outperformed all previous Singaporean finishes with a quarterfinals berth. Martin Juza had Level 8 locked for next year and was one of a few players who could capture the Player of the Year title with a high finish this weekend. Both players battled with the Prismatic Omen–fueled Scapeshift deck. 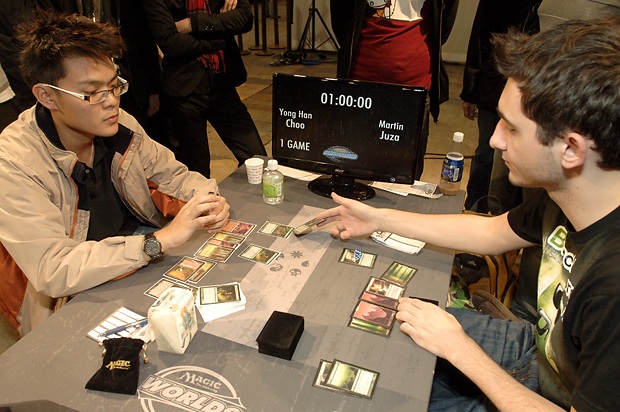 Juza won the die roll and chose to play first, and both players kept their opening hands.

The first two turns of the game proceeded in true mirror fashion with Juza and Choo each resolving Prismatic Omen. The next play from either player would be a Growth Spasm from Choo. Choo added a Forest and an Eldrazi Spawn token to the battlefield; the latter met a Lightning Bolt from Juza at the end of the turn. Both players alternated land drops until the lull was broken by Choo. Choo tapped six land, floating two mana, and played Scapeshift. Five land went to Choo's graveyard and two Valakut and 3 Mountains hit the battlefield. Due to Prismatic Omen making each of Choo's land a Mountain, in addition to each other basic land type, Juza took a grand total of 45 damage from Valakut triggers.

Juza was on the play and took two mulligans down to five cards. Choo was happy with his seven cards.

Juza's kicked this game off with a turn-two Khalni Heart Expedition. Choo had a more immediate impact on his mana base with Rampant Growth. Juza, on his turn, drew an Explore. Upon casting, he drew the second land needed to get full value from the extra land drop this turn as well as to put two counters on his Expedition. Choo continued his mana development with Oracle of Mul Daya. Primeval Titan sat on top of Choo's library, so he settled on playing a Valakut from his hand and passing the turn. Juza could only muster an Evolving Wilds for his turn. Choo, with a commanding board position, played Prismatic Omen and began playing land from the top of his library; the first being his second Valakut and next Evolving Wilds. Juza took 12 damage before he was able to respond to the Evolving Wilds activation with Nature's Claim on the Omen. Choo revealed a Scapeshift to combo off, and Juza extended the hand.