In his first Pro Tour—a World Championships no less—Aleksei Golovin found himself playing with just five losses deep, deep into the tournament. His opponent? Christian Calcano of New York, who was playing against the Russian with the hopes of winning the Rookie of the Year title. Both were eligible contenders playing so late into the afternoon, and a win would put them in the lead if they could maintain their pace in the 18th round of competition following their feature match.

With his opponent on the play, Aleksei was forced to start on a mulligan, though he got to keep his second hand. Calcano led off with Treefolk Harbinger, fetching up a second copy of the 0/3 for his following draw step. Golovin had a Cursecatcher, indicating the matchup was Doran Rock for the American side of the battlefield and Merfolk for the Russian side. The second Harbinger allowed Calcano to hunt up a Murmuring Bosk, and with that "dual" land he was able to cast Doran, the Siege Tower. When his opponent didn't counter, Christian sent with his Harbingers, effectively 3/3 with his deck's namesake legend on the battlefield. 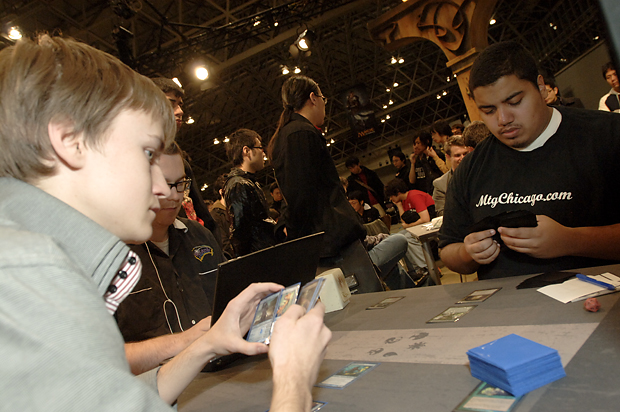 Aleksei Golovin of the Russia Federation and Christian Calcano of the United States.

Across the table Aleksei was struggling. He had a Merrow Reejerey and Stonybrook Banneret to go with his Cursecatcher, but he was stuck on Island and Mutavault for his lands. That meant he couldn't cast any of the

spells in his hand, and was falling behind to his opponent's monstrous threats. To make matters worse, Christian was able to cast a Knight of the Reliquary to further increase the size of his team making Aleksei's odds in the game even worse.

Using his Banneret's cost-reduction ability, Golovin cast a second copy of Merrow Reejerey, untapping an Island from the first's triggered ability for having done so. That allowed him to cast a second Cursecatcher, which allowed him to untap both of his lands via two Reejerey triggers. It was an unexpected turn of events that allowed the Russian to attack his opponent with plenty of blockers left back. Thanks to some early damage from his own mana base, that left Christian at 6 life.

But the American had the game on lock, untapping and drawing before activating his Knight of the Reliquary to tutor up a land of his choosing.

"Just show me," his opponent said, referring to what he assumed was going to be a Sejiri Steppe.

"Yeah," Calcano replied, revealing the Worldwake common and sealing up the first game by making his Doran unblockable.

The second game started with Calcano on the draw and on a mulligan, the exact inverse of the first game. A Stonybrook Banneret allowed Aleksei to come out aggressively with a second copy on the cheap and a Mutavault. The aggressive start put pressure on Christian's life while he fiddled with his mana base, playing lands that entered the battlefield tapped. When he finally did cast a spell, however, it was a big one as he used Maelstrom Pulse to hit both of his opponent's Bannerets. 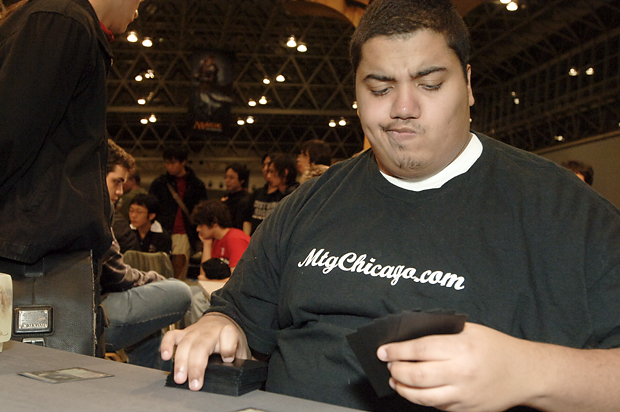 Reloading, Golovin cast Sygg, River Guide and passed the turn. The 2/2 was outclassed by Christian's return-fire of Great Sable Stag, but a Merfolk Sovereign allowed Aleksei's Mutavault to threaten to trade for the 3/3 with protection from blue. Kitchen Finks made up some of the life Christian had lost to his opponent's early attacks, but he sent with his Stag into Mutavault, apparently unafraid to potentially trade for the creature-land.

Sygg and the Sovereign began attacking while a third Stonybrook Banneret joined the Russian side of the battlefield. Christian simply cast a second Kitchen Finks to keep his life total secure, as well as a Birds of Paradise as a potential chump blocker. A third Kitchen Finks and a Knight of the Reliquary seemed to indicate the match would soon belong to Calcano, particularly as Aleksei frustratedly failed to counter either spell.

Christian went for the throat, casting Profane Command to give three of his creatures fear and to force his opponent to lose 3 life. But Golovin DID have a counter in the form of Sage's Dousing, and he used it to stop the spell and pick up a card. Calcano seemed disappointed at the turn of events, but still sent his team to the red zone. When the smoke cleared, Mutavault had been exiled via Path to Exile, the Stonybrook Banneret was dead, and all of Christian's creatures had survived, albeit with persist counters for each of the three Kitchen Finks. 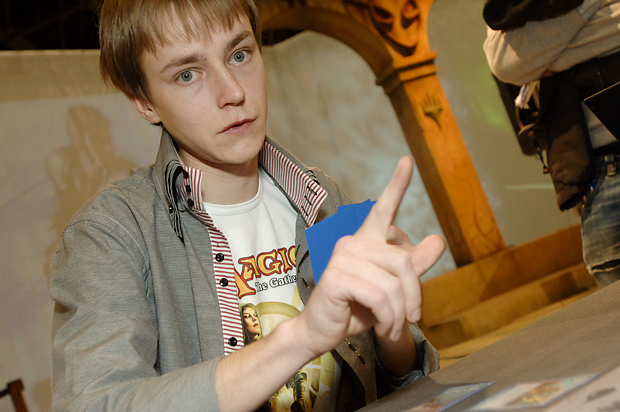 Outnumbered by attacking creatures six to two, Aleksei cast a Silvergill Adept and a second Merfolk Sovereign. The American, however, showed no signs of letting up. He used Knight of the Reliquary to fetch up a Stirring Wildwood, then sent his entire team to the Red Zone to pressure his opponent. A topdecked second Path to Exile allowed Calcano's forces to kill all of his opponent's creatures while losing only a Kitchen Finks himself. It was a lucky draw, and seemed to lock up the match.

The only spell that could save the Russian was Cryptic Command, and he had one. But when he used it to tap his opponent's team, Christian was smart enough to leave his creature-land back, able to activate the 3/4 Stirring Wildwood to get in, dropping his opponent to just 3. A turn later, Aleksei conceded.