2010 Magic: The Gathering World Championships Round 18: Under Pressure

Coming into the final round of the Swiss part of the competition, some of the slots are locked up, but there are definitely still some to play for. Bertil Elfgren, being paired down, was not in a position to be able to take a draw, and would be forced to play against Great Britain's Jonathan Randle. A former National Champion, and a National Team alternate this year, Randle was flying the flag high for Great Britain. When back in the UK he is one of the leaders of the "mtguk" community site, posting articles and editing submissions from local players, even tipping off the Standard deck list that he was going to play here at Worlds. 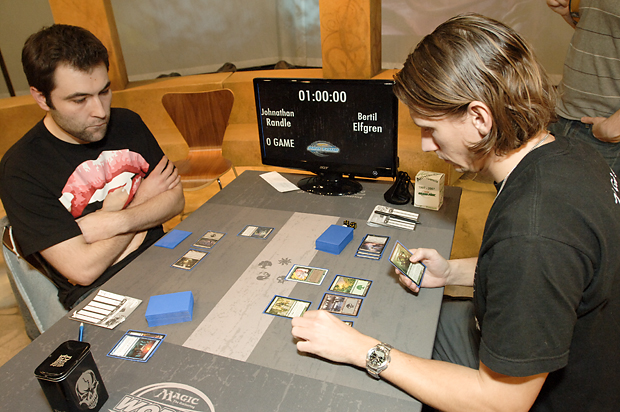 Jonathan Randle and Bertil Elfgren sit down for a nice, mellow match with a Worlds Top 8 on the line.

The game was simple. The winner would be in the Top 8 of the World Championships. No pressure then.

On the play, Elfgren led off with a Forest and a Llanowar Elf, before losing a Fauna Shaman to an Inquisition of Kozilek from Randle's Faeries deck. Elfgren was quick to fire back with a Thoughtseize of his own, and saw Bitterblossom, Spellstutter Sprite, Mana Leak, Vendilion Clique, and lands. He took the Mana Leak and played out a Heritage Druid.

Randle's turn was just to cast Bitterblossom. He looked on as Elfgren cast a Heritage Druid, and attacked for 2. After a little thought on his turn, Randle used a Disfigure and a Smother to leave Elfgren without any Heritage Druids. Those little Druids could threaten too much mana for Randle to leave them around. 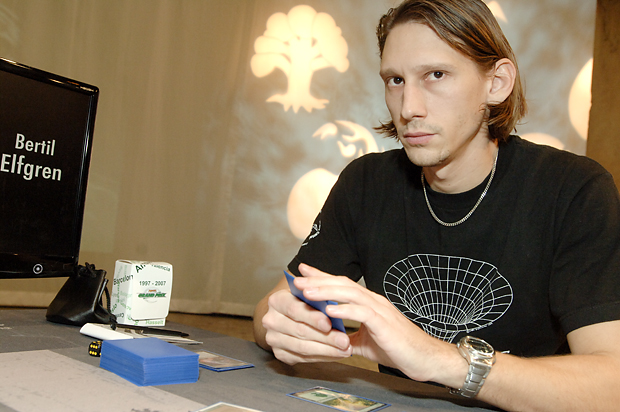 Elfgren had little follow-up, and could only look on as that Vendilion Clique gave Randle perfect information to work with. Randle was fine with the land and Regal Force in his opponent's hand. The Force was not yet castable, and even if it was, it would not be as scary a threat as it often is from Elves, thanks to Elfgren's largely clear board.

By the time that Elfgren had drawn enough mana to cast his Regal Force, Randle had enough Faerie Rogues in play that, with the help of Mutavault, he was able to stop the seven-mana spell with a Spellstutter Sprite. This was enough to move things on to Game 2.

Elfgren led things off in Game 2 with a Nettle Sentinel, and followed up with Fauna Shaman. He was given pause though when Randle played a turn-two Ratchet Bomb. It soon ticked up to one counter, which was a clear and present danger to much of Elfgren's deck.

Both players seemed content to wait things out. Randle attacked in with his Mutavault, while Elfgren used Fauna Shaman to find Chameleon Colossus in the end of turn step. The four-drop soon came down. Did Randle have an answer for that one? It looked that perhaps he didn't as he ticked up his Ratchet Bomb to two counters. He did have a Disfigure for Fauna Shaman, but was now on the back foot to the might of Chameleon Colossus, which with a pump knocked him to 4. Ratchet Bomb would be too slow without a blocker. 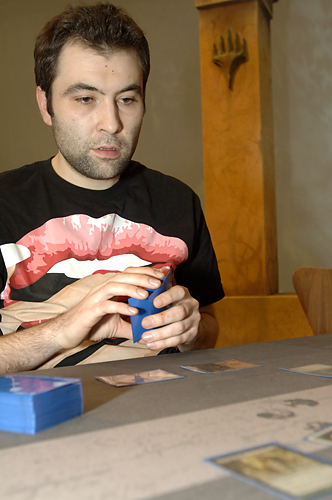 Those are some very big lips.

That second Ratchet Bomb came down, while the first remained at four counters. Randle's plays were at the moment simply the only ones that would keep him alive. After a Devoted Druid came down for Elfgren, allowing a Nettle Sentinel attack, Randle popped his bomb and used Disfigure on the Sentinel which was soon replaced.

Mistbind Clique bought Randle a turn, and found him a valuable attacker. Elfgren was at 14 from Thoughtseize and small attacks, and between the Clique and Creeping Tar Pit he suddenly presented a nice two-turn clock. He cracked in for 7. Elfgren made a fight of it, with an Elvish Archdruid allowing an attack for 2 (Randle's life total), but that Ratchet Bomb was enough to keep Randle at 1.

A single final 7-point swing from Jonathan Randle secured the win, for a 6-0 sweep of Extended, and a place in the 2010 Worlds Top 8.